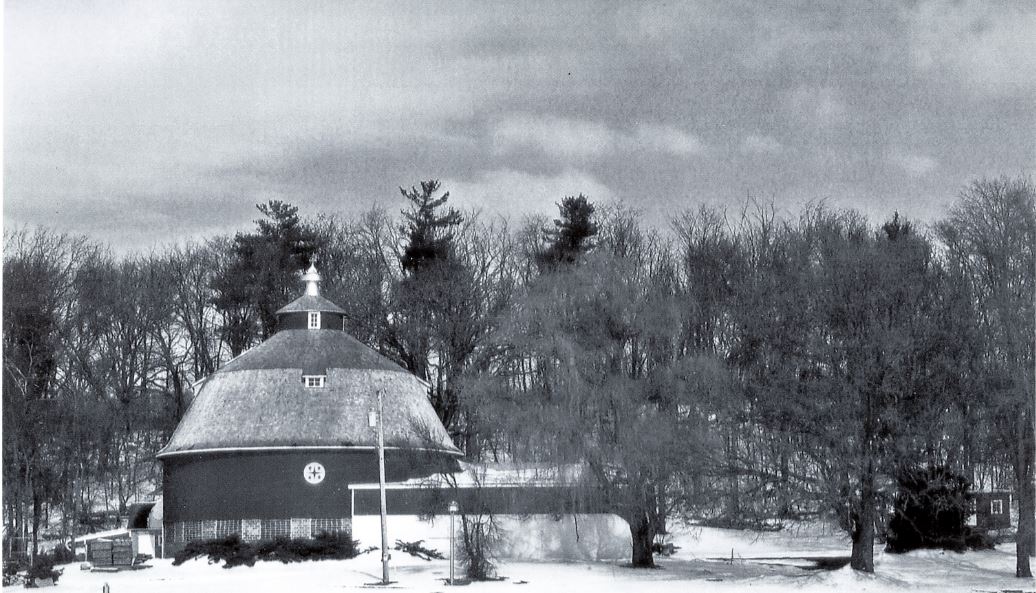 The Ten Eyck Orchard in Brodhead has one of the only two remaining round barns in Green County.  Ten Eyck is also one of the earliest farms in Green County, daing back to 1839.  This property was listed in the National Register of Historic Places on November 29, 2016. 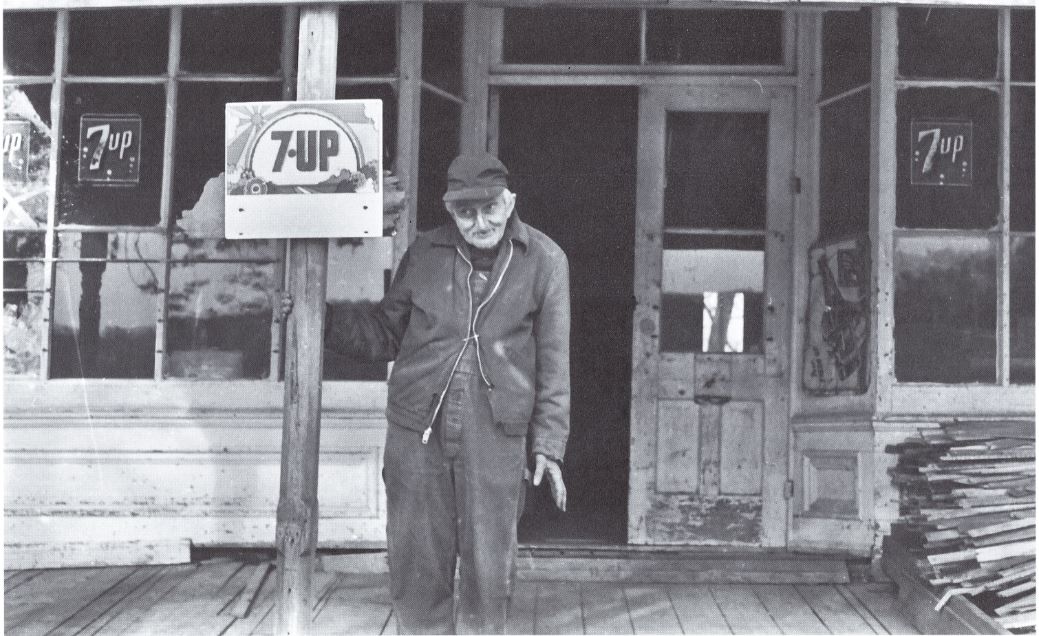 Robert Denton, aka "Bobby Dent" Smith standing on the front porch of his Montrose/Jimtown Store near Belleville, Wisconsin.  Bobby was an iconic figure in the Belleville, Monticello, and New Glarus area.  Until a few years before he closed his store on January 1, 1988, he traveled regularly to Belleville, New Glarus, and Monticello in his Model A Ford. 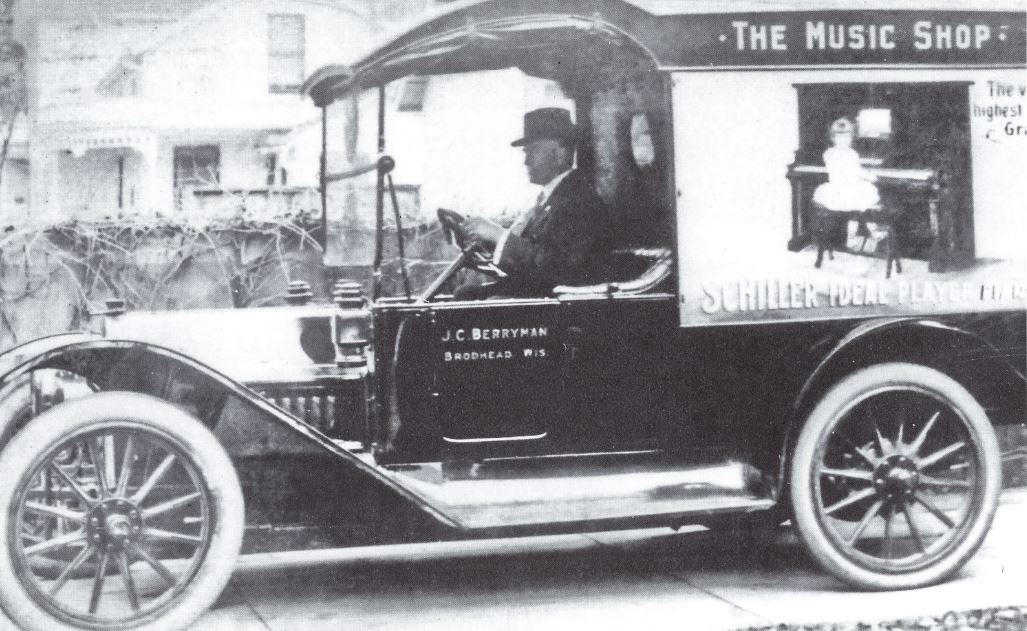 Music was a big part of home life in the early decades of the 20th century.  Many homes had a home piano or organ which families often gathered around in the evening to share songs and stories of times past.  Brodhead businessman J.C. Berryman used this vehicle to service and repair home pianos and organs. 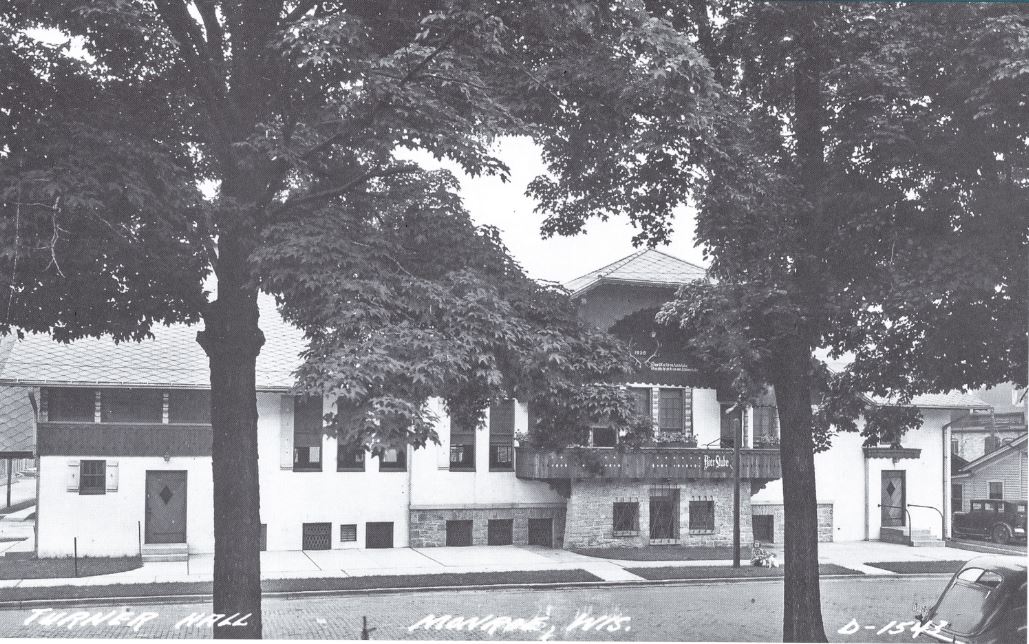 April brings the 150th anniversary of Turner Hall in Monroe.  Turner Hall has had a very active history as the community center for Green County.  One of the biggest events at Turner Hall was a March 1960 visit and speech by future president John F. Kennedy.  Many nationally known people of their day gave speeches, such as Belle Boyd, a former Confederate spy, and Janet Jennings of Monroe, a Civil War contract nurse, known as "The Angel of the Senneca," a military hospital ship that carried injured American soldiers back to the U.S. from Cuba during the Spanish American War.  Numerous events throughout this year (2018) will be presented at Turner Hall to celebrate Turner Hall's sesquicentennial. 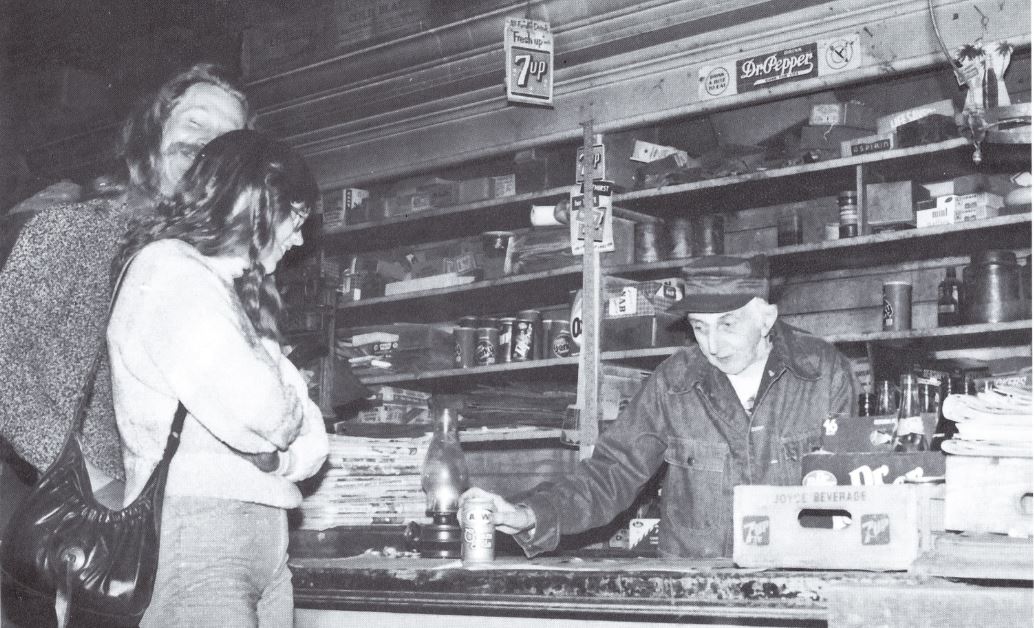 It's Sunday morning and it's Bobby Dent's busy day.  Each Sunday morning for many years a group of 10-20 people would congregate at the Jimtown Store for storytelling, sharing what took place during the last week, and a great social hour or two with friends and neighbors. 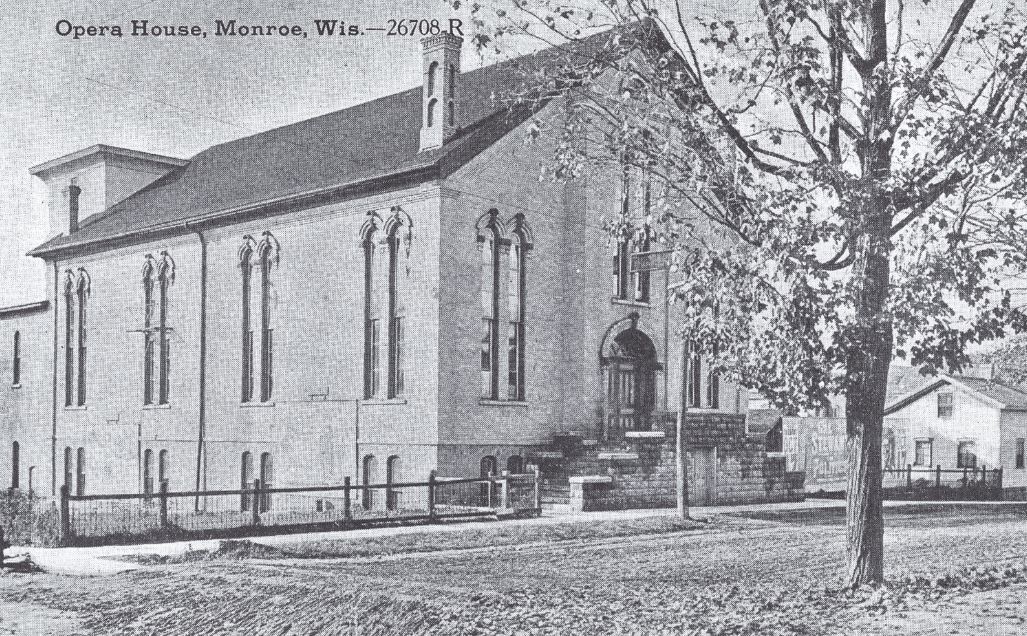 This beautiful building was the first Turner Hall in Monroe which was destroyed by fire in 1936.  During the fire, noted Monroe cheese man, Carl Marty, began a fund drive to rebuild what is now the current Turner Hall. 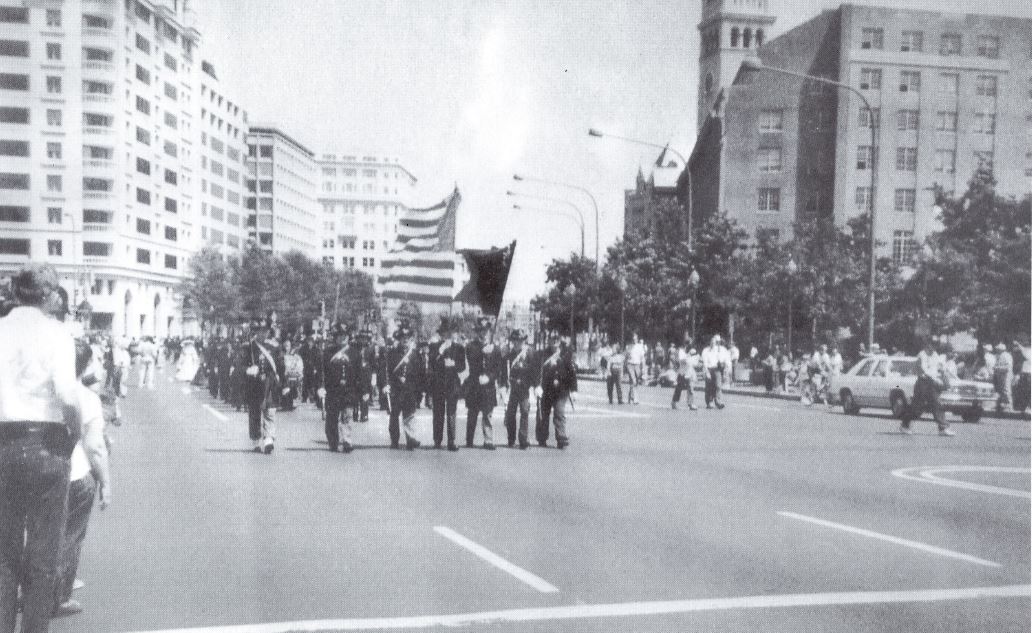 Brodhead's Civil War, 1st Brigade Band accompanied Gen. William Sherman's troops during the March to the Sea.  This 1st Brigade replicating the original band has played their Civil War era instruments in parades across the country.  The band is shown here marching in Washington, D.C.  They also played for the dedication of the Wisconsin Veterans Museum in Madison. 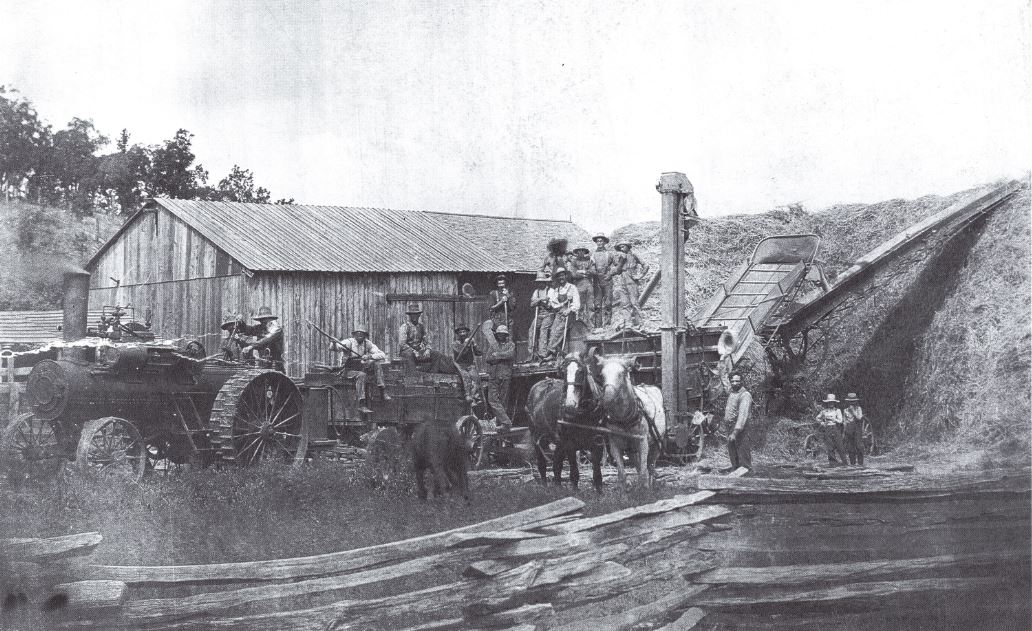 Every year in August farm neighbors gathered at each farm for the annual threshing day.  The women and girls worked preparing a large dinner for the assembled threshing crew which included the young boys.  The threshing machine was communally owned by several neighboring farmers. 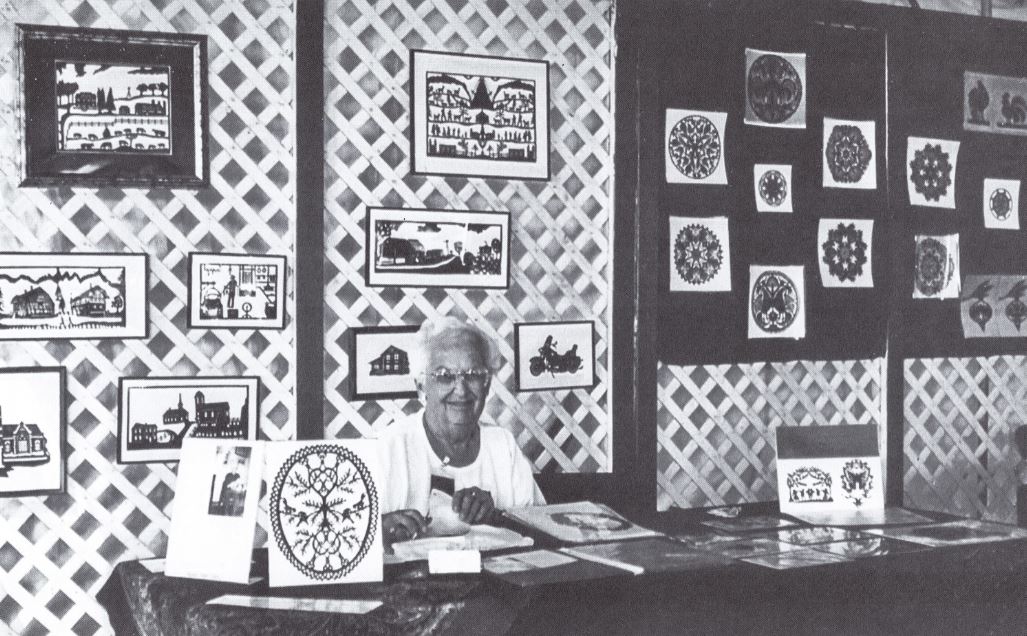 New Glarus is the home of Elda Schiesser, a noted Swiss Scherenshnitte (Swiss scissors cuttings), an old Swiss artform.  Schiesser has shown and demonstrated her work both in the United States and Europe.  One of her works appeared on the White House Christmas tree during the George W. Bush administration.  Elda was doing her Scherenshnitte well into her 98th year.  She passed away on November 26, 2017. 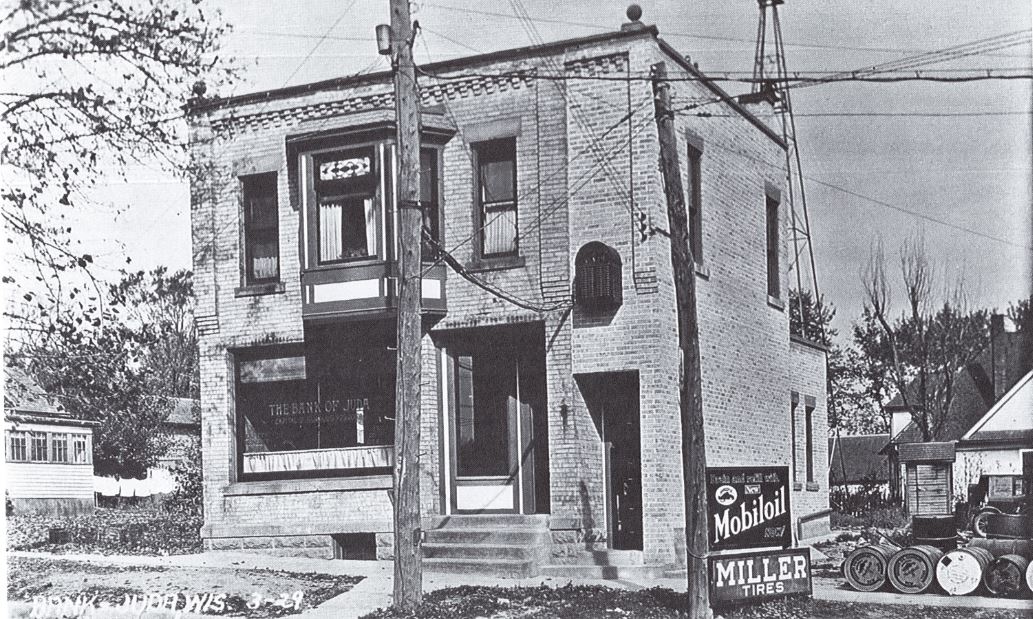 During the many years of Juda's history, the comunity has seen three different banks.  This beautiful second bank building dates to the turn of the 20th century.  The black box hanging on the front façade is no doubt the burglar alarm. 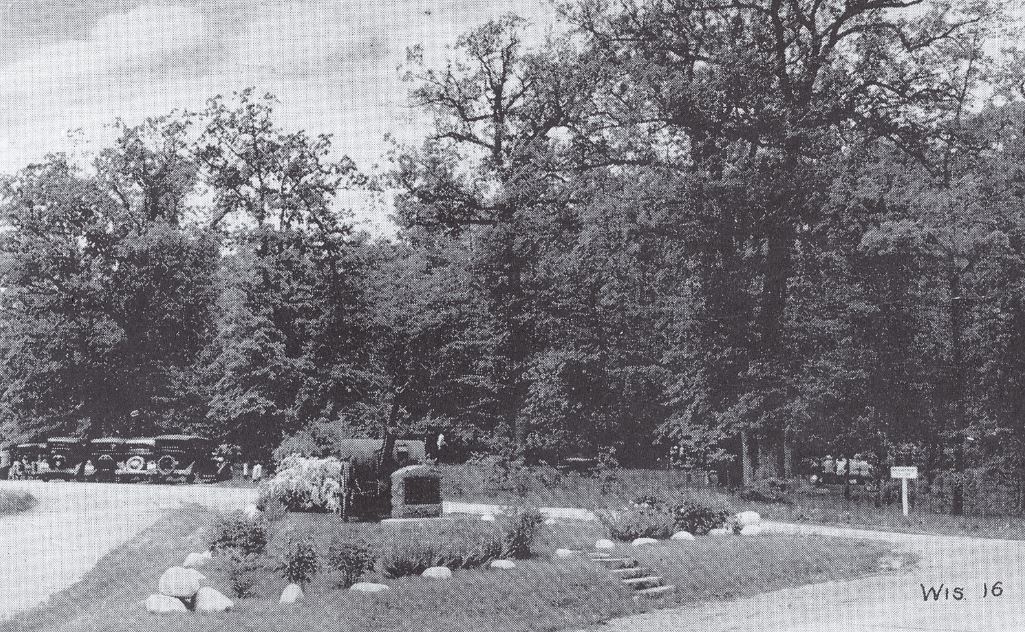 On May 30-31, 1930, the Walter Stuessy New Glarus American Legion Post #141 dedicated this memorial at the Old Lead Trail that led from Galena, IL to Milwaukee.  The memorial shown here also had a WWI field cannon as part of the memorial.  Today all that remains is the memorial stone. 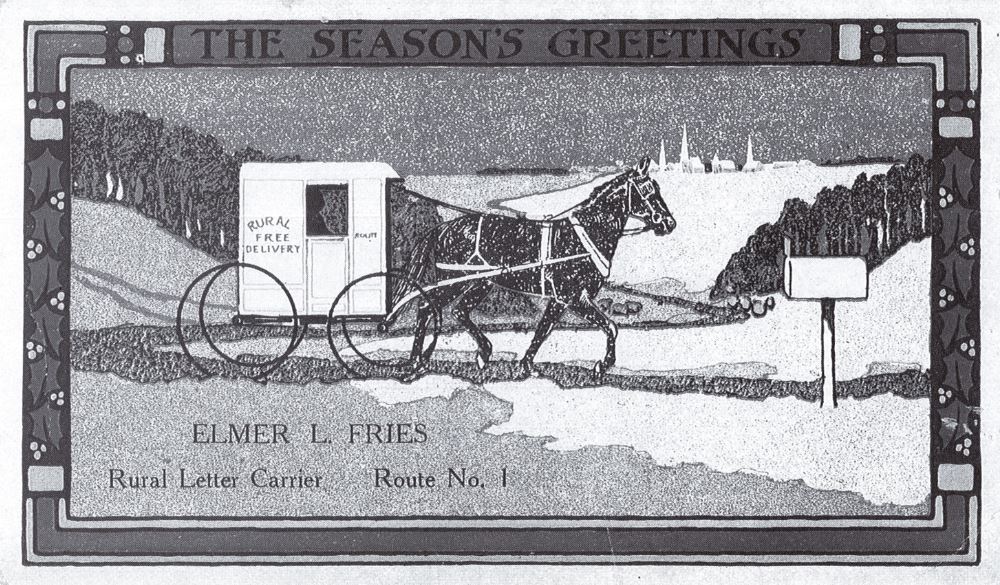 Merchants and public servants often used seasonal cards of this type to thank their customers and patrons for their business during the past year.  Rural letter carriers such as Elmer L. Fries no doubt received many gifts each year from his patrons, who saw the arrival of the RFD carrier as the bearer of the previous day's happenings.