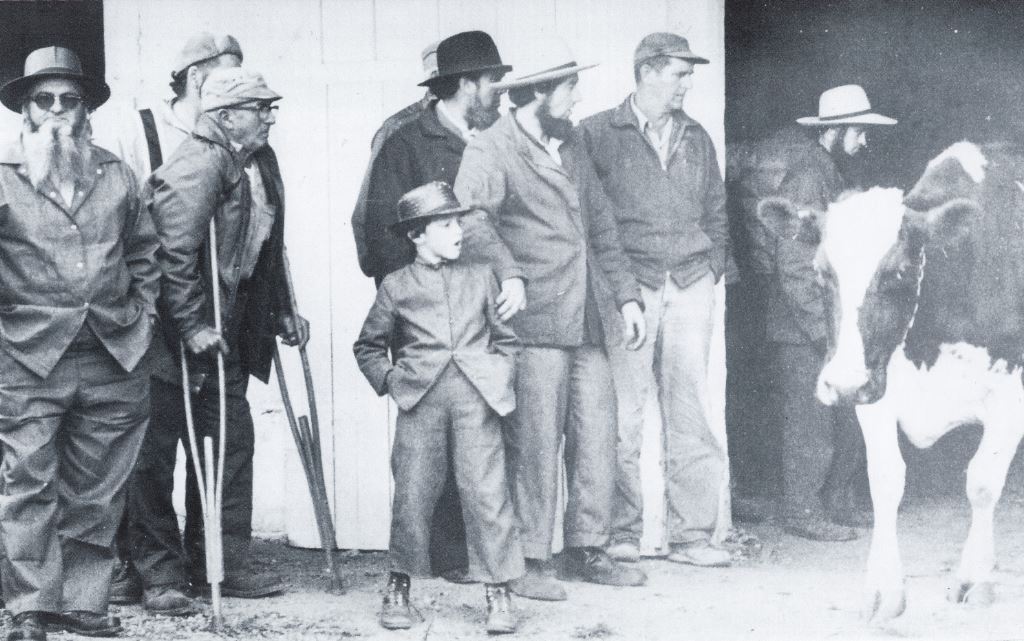 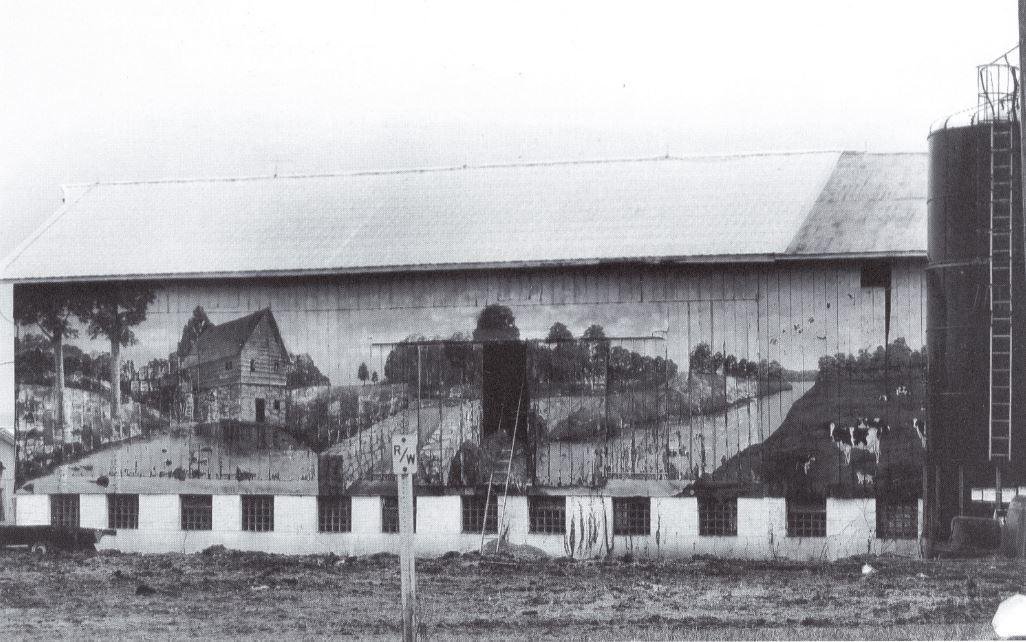 This mural was painted on a barn northwest of Brodhead by Frank Engebretson, who painted houses and barn murals.  This farm has murals on two barns.  The only other known extant Engebretson barn mural is just west of Woodford, Wisconsin.  During his career, Engebretson painted two miles of barn murals. 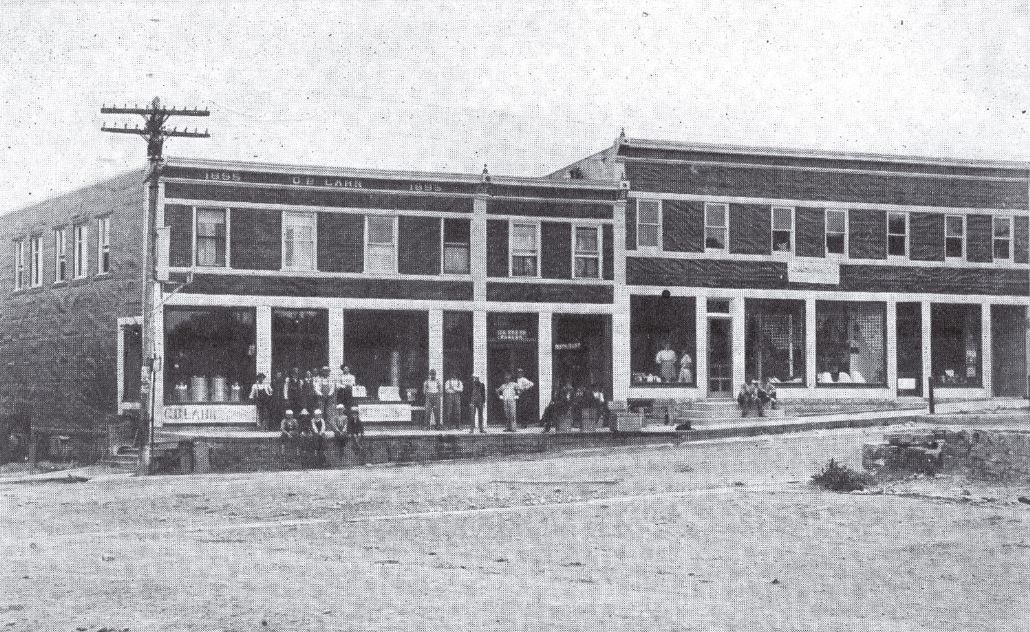 A good look at Juda's main street.  The building on the left is the Lahr store which shows the date 1895 at the top of the building.  The store on the right appears to be a variety store. 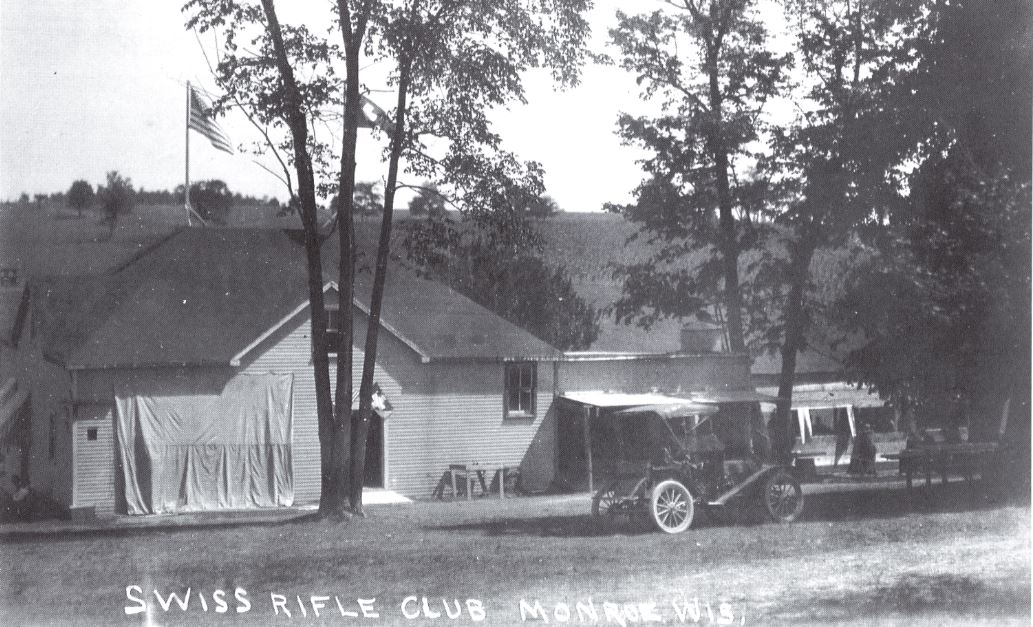 The Swiss Rifle Club of Monroe was one of several shooting clubs in Green County, including Monticello and New Glarus.  The Monroe shooting house was located on the east side of Monroe.  Competitions were held around the state.  The Highland, Illinois (a Swiss town) team often came to Green County for competitions, and Green County teams also went to Highland for these contests. 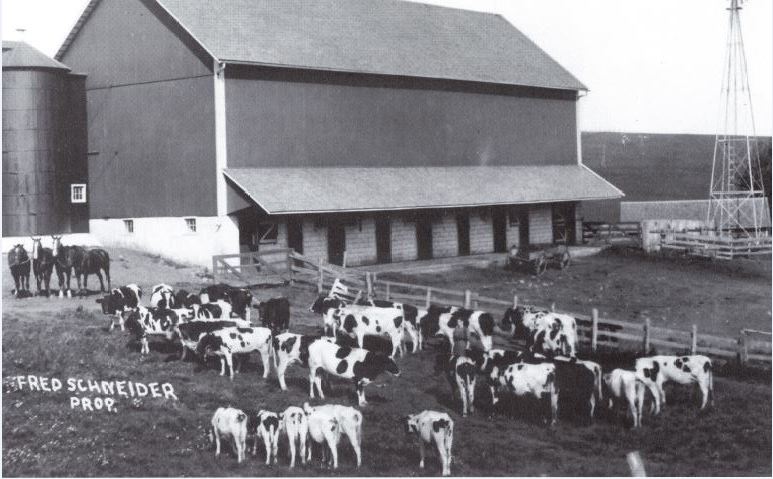 The Schneider farm was founded in 1909 by Mr. and Mrs. Fred Schneider.  The farm is now owned by Deborah and Marvin Schneider, grandson of the founder of the farm.  The farm was honored with Wisconsin Century Farm status by the Wisconsin Farm Bureau in 2009. 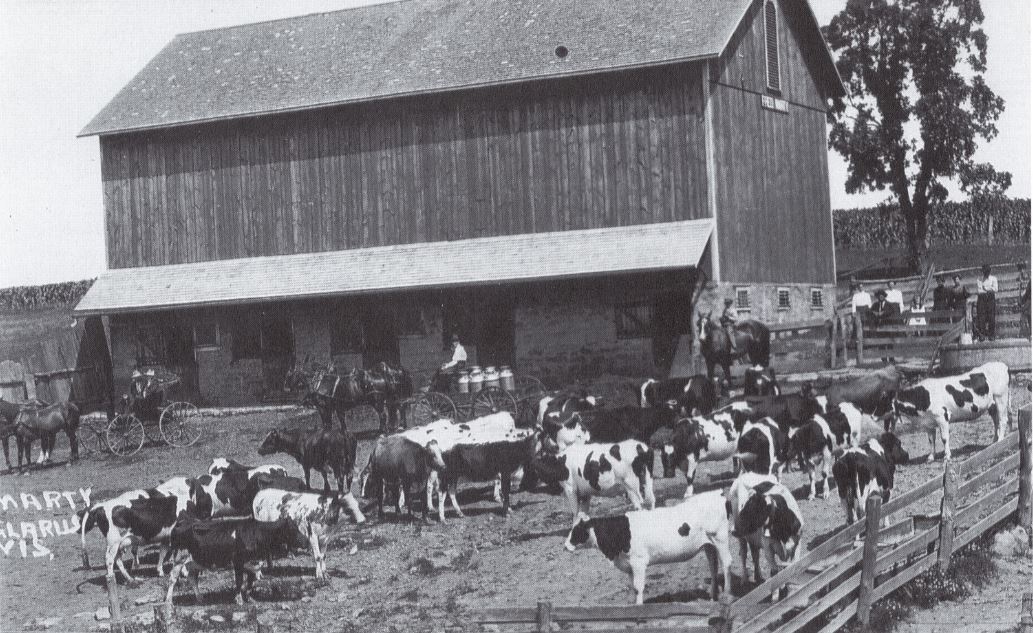 The Fred Marty family has gathered for a group photo around their barn and herd of Holstein cattle.  It has been said that farmers' proudest posessions were their barns and cattle.  On the far left you can see two well-dressed men in their Sunday best.  The man on the milk wagon is equally well-dressed, as are the people to the right of the barn. 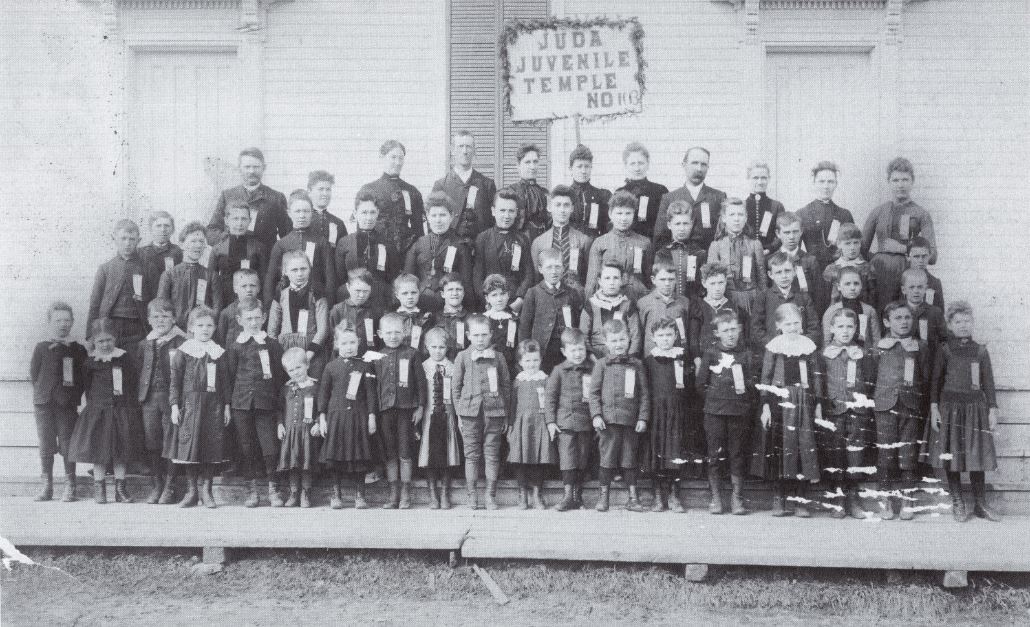 The Juda Juvenile Temple #103 members are proudly showing off their ribbons for participation in a local group activity.  This group was probably a part of one of the local fraternal organizations that were popular in the early 1900s. 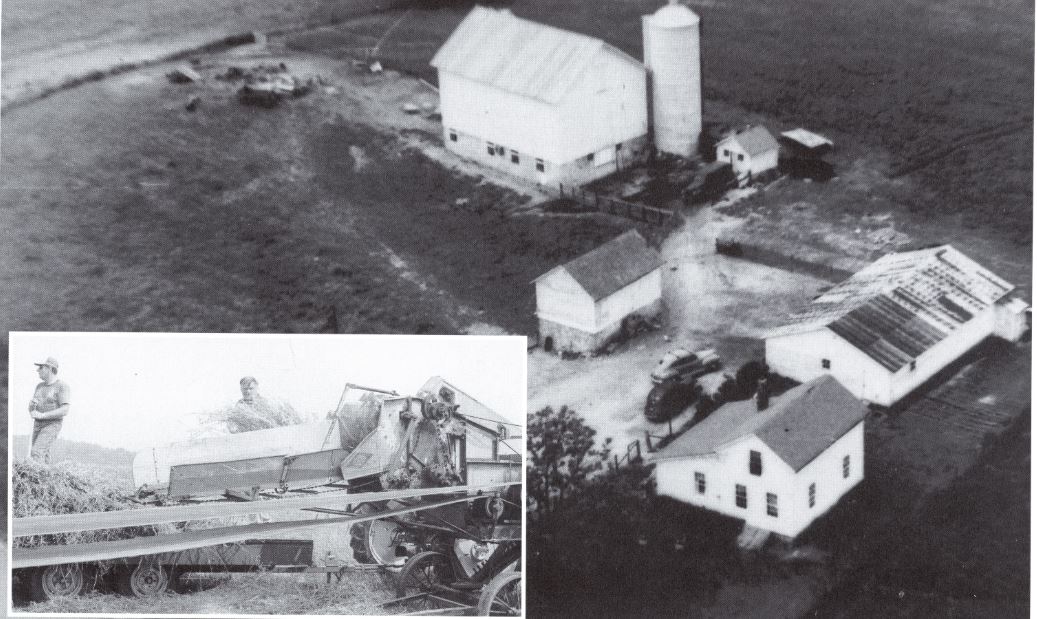 Inset photo: long gone are the days of the August threshing crews, when the neighbors gathered to thresh the oats, then moved on to the next farm.  This August 6, 1994 photo is on the former Melvin and Lily Jensen farm in Primrose.  Dick Wittwer is pitchforking the oats to Tom Rindy to feed into the threshing machine.  Background photo:  Aerial view of the Jensen farm in the late '40s or early '50s. 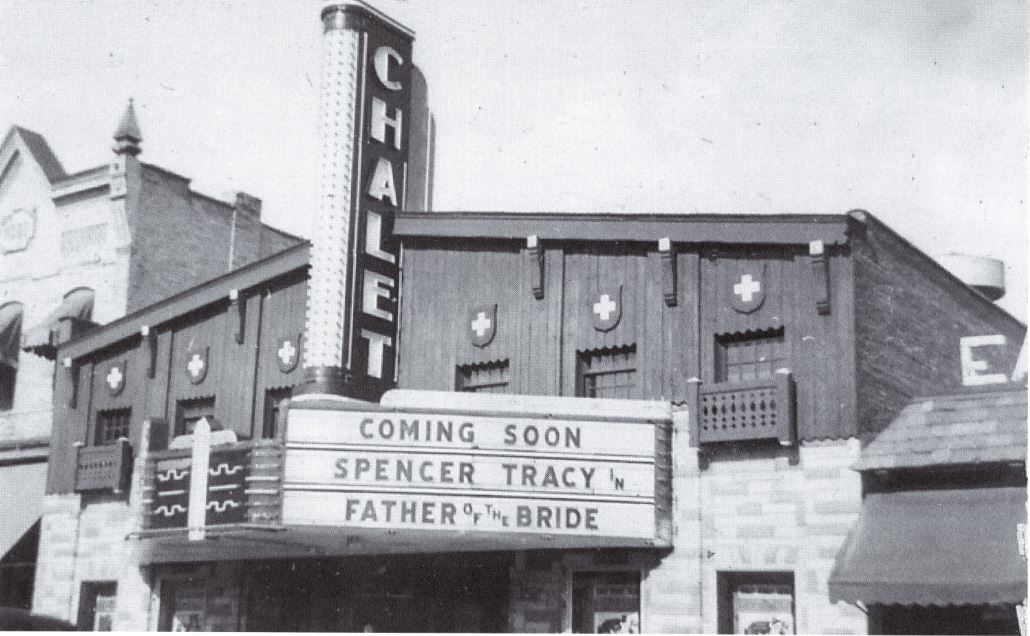 This 1950 photo shows the Chalet Theater in Monroe, started by one of the large Hollywood studios to give the Goetz Theater competition.  The corporate-owned Chalet Theater didn't stay in business too long, as the Goetz family started a second theater, the Goetz Junior Theater, which offered increased competition. 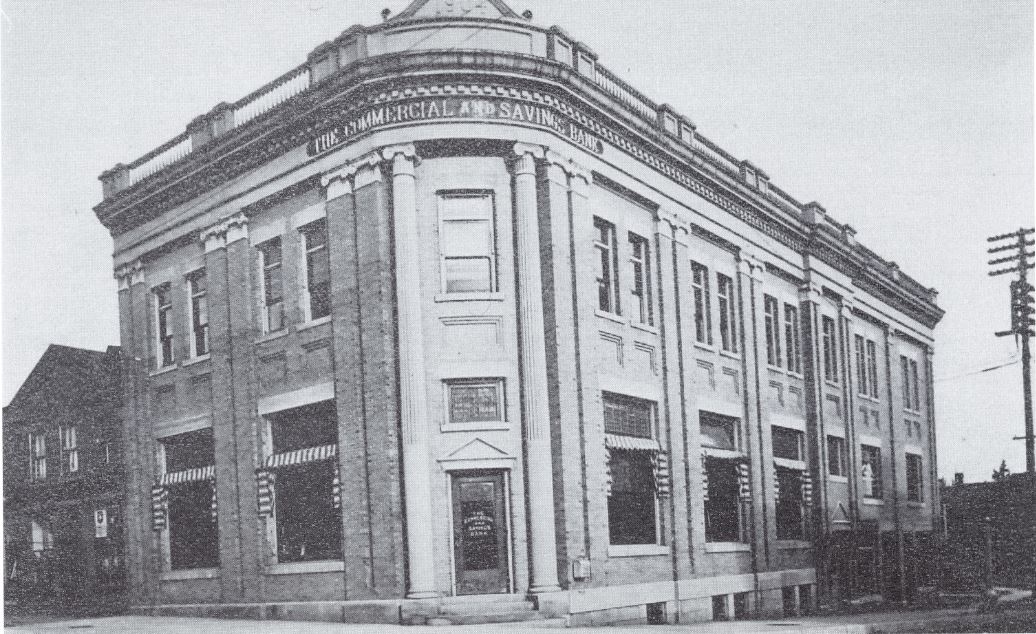 The former Commercial and Savings Bank was located on the northeast corner of Monroe's historic downtown square.  This architecturally beautiful building served the Monroe area for many decades.

This well-kept unidentified barn is located in the New Glarus area.  The louvers on the barn walls allowed air to circulate through the haymow to promote the drying of the hay, lowering the chances of a barn fire.  The two young men in the photo are proudly showing off the family's buggy horses. 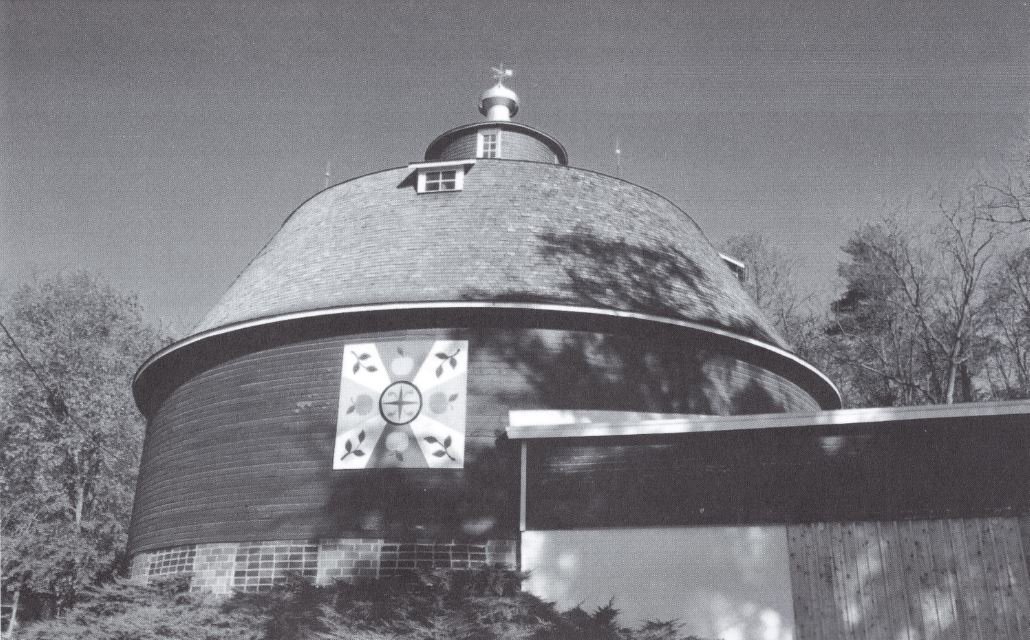