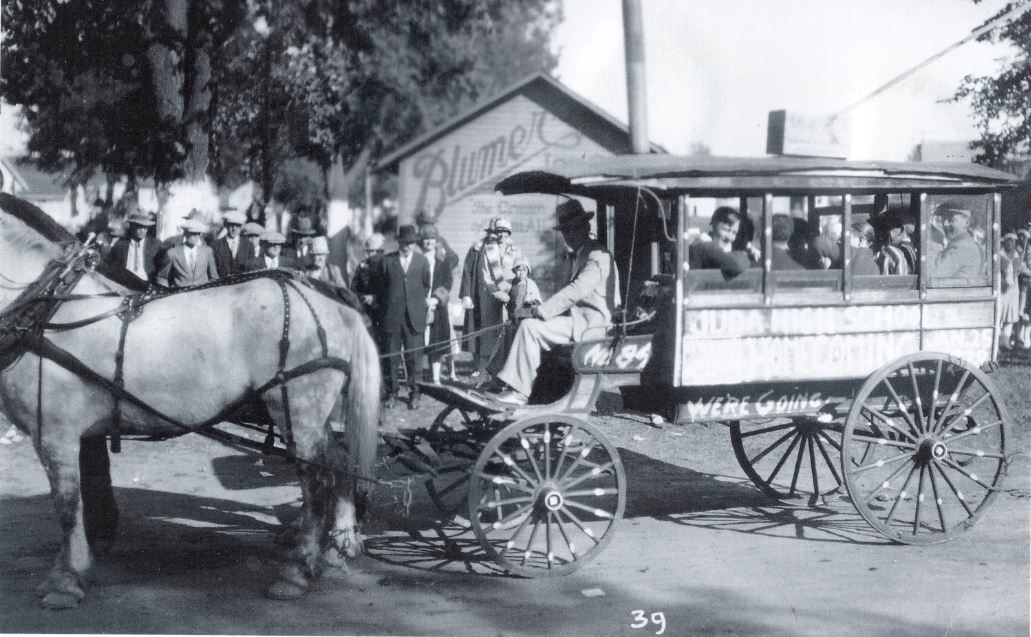 The town has come out for a big local event, perhaps a 4th of July celebration.  The horse-drawn bus in the foreground is advertising the Juda High School Homecoming to be held on January 25th.  Homecoming events were often a well-attended all-school reunion. . . a time to renew old friendships from school days. 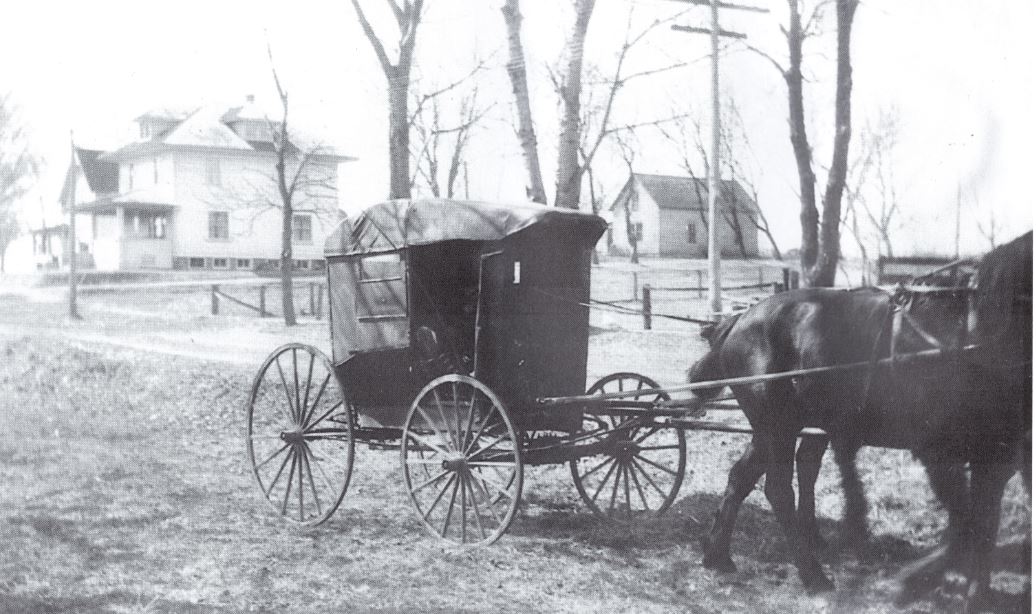 This horse-drawn buggy shown on Harrison Street in Belleville was actually a U.S. Mail Delivery buggy that traveled the RFD (Rural Free Delivery) routes in the Belleville area.  In late winter farmers eagerly awaited the daily mail delivery to see which new spring seed catalogs had the most unique new seed offerings for the upcoming spring planting season. 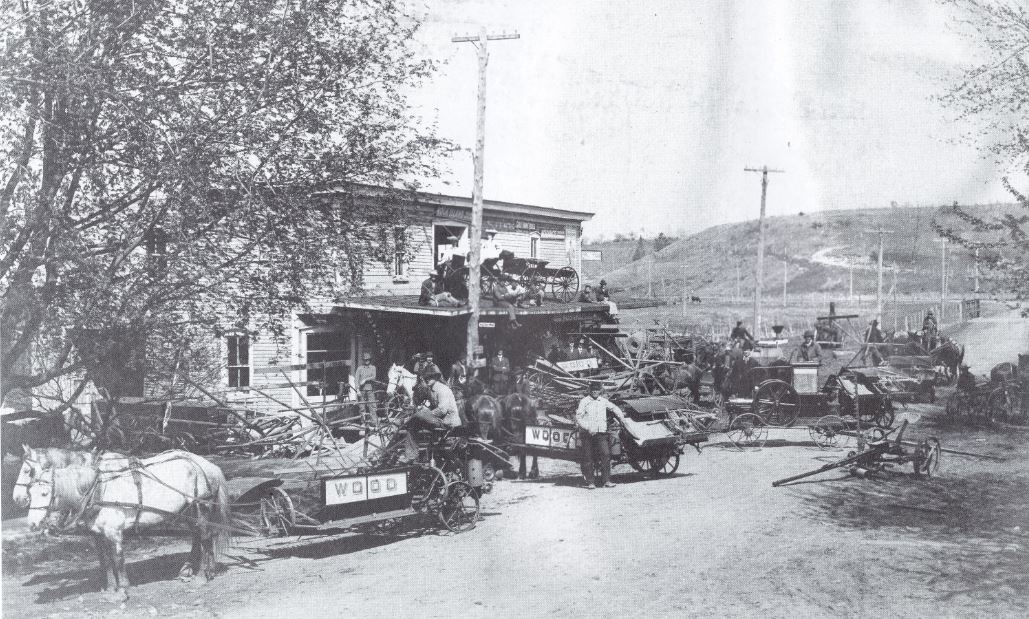 (JUDA - photo courtesy of Paul Matzke)
It's springtime in Juda and Matzke Implement is showing off its newest selection of Wood Brothers farm equipment.  Equpiment of this type saved farmers many hours of what had been hard manual labor.  Notice the horse-drawn wagons on the porch-roof. 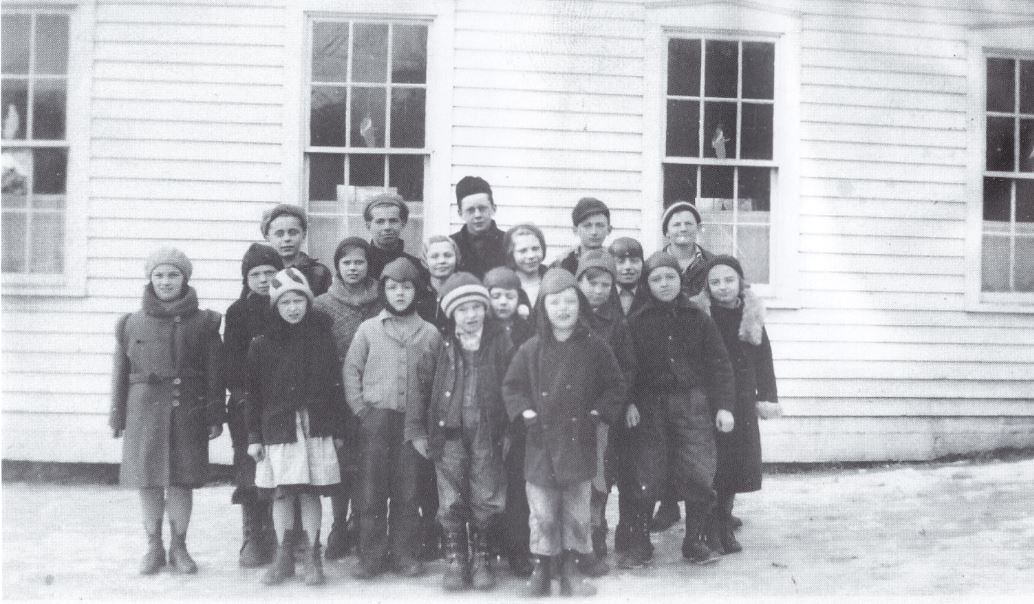 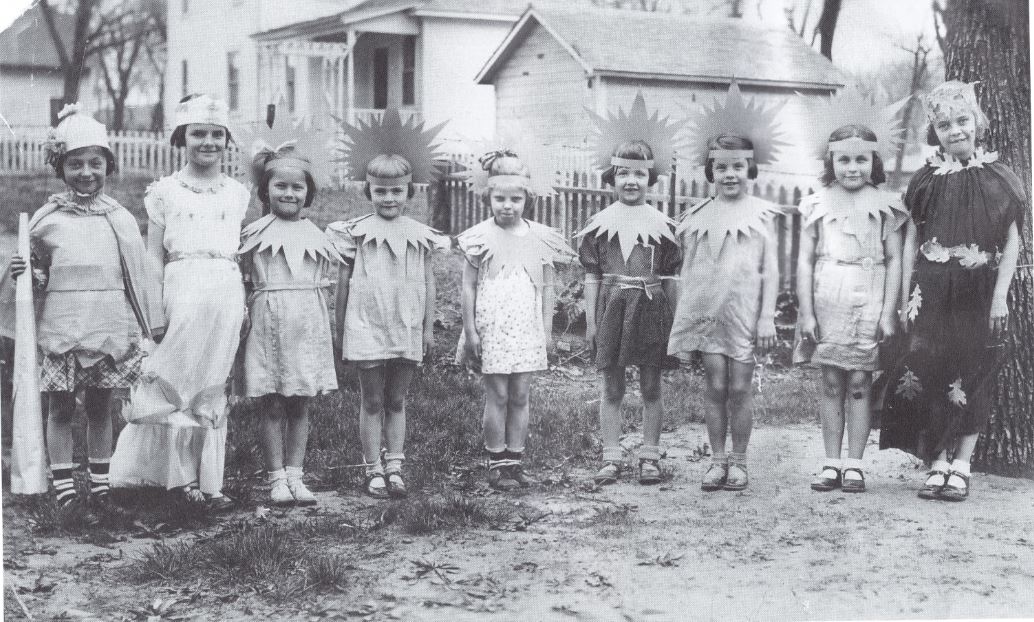 This mid-1930s Brodhead school class is preparing for a school play.  Class plays of this type were often the biggest event of the school year. 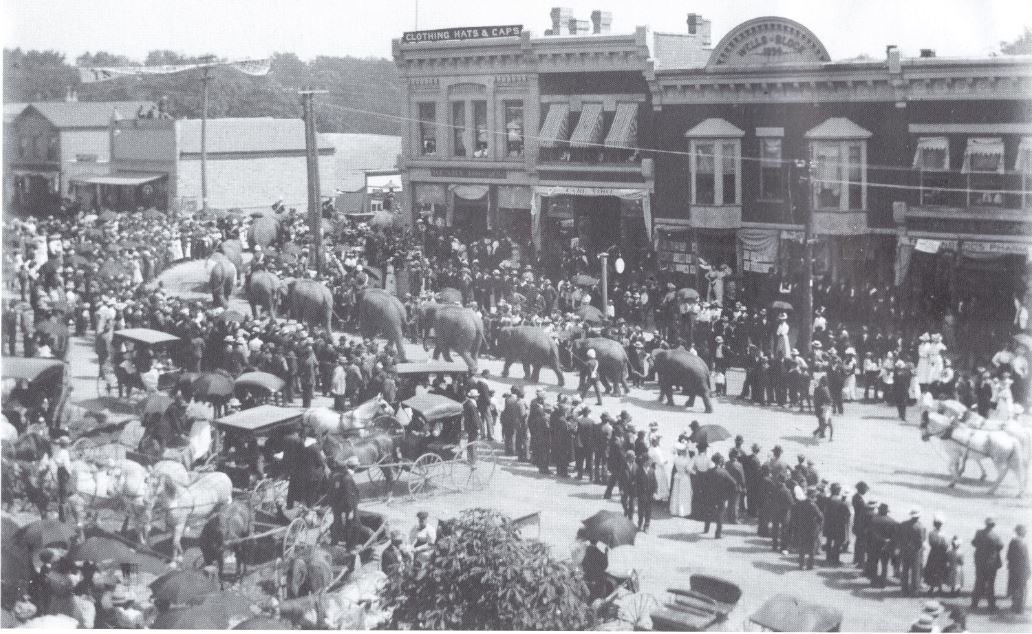 It's summertime and that means the circus is coming to town.  Circuses were an eagerly awaited event for children and adults alike.  Traveling circuses, such as this one, often did parades from the train station to the circus grounds, no doubt the Green County Fair Grounds. 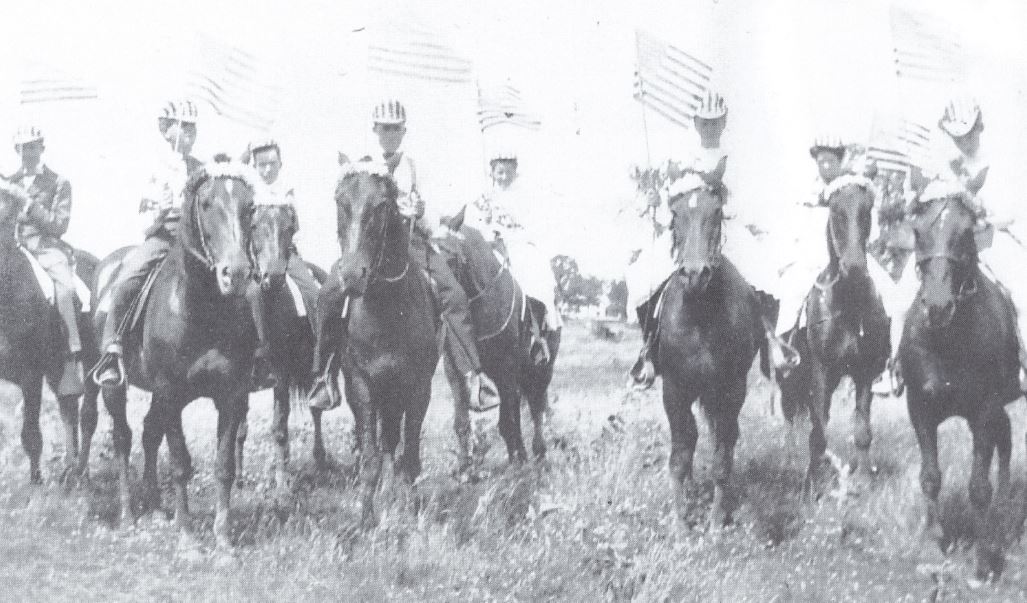 Nearby Dayton was holding a summer celebration, no doubt a 4th of July fete.  The 4th of July at this time in our history was a day of celebration of the birth of the United States, a time to give pause to what our forefathers endured to build a very unique country.  Businesses closed for the day, and there were no 4th of July one-day sales promoted by big department stores. 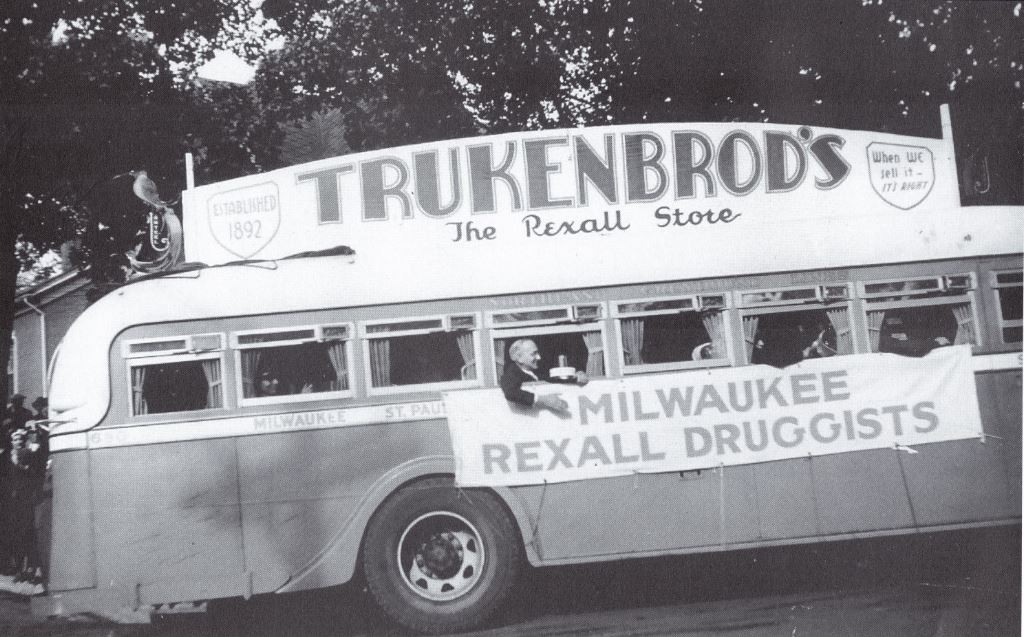 The Cheese Days Parade always drew in parade units from all over the area.  Trukenbrod's Rexall Store was the sponsor of this parade unit consisting of other druggists in the Rexall chain of independently owned drug stores. 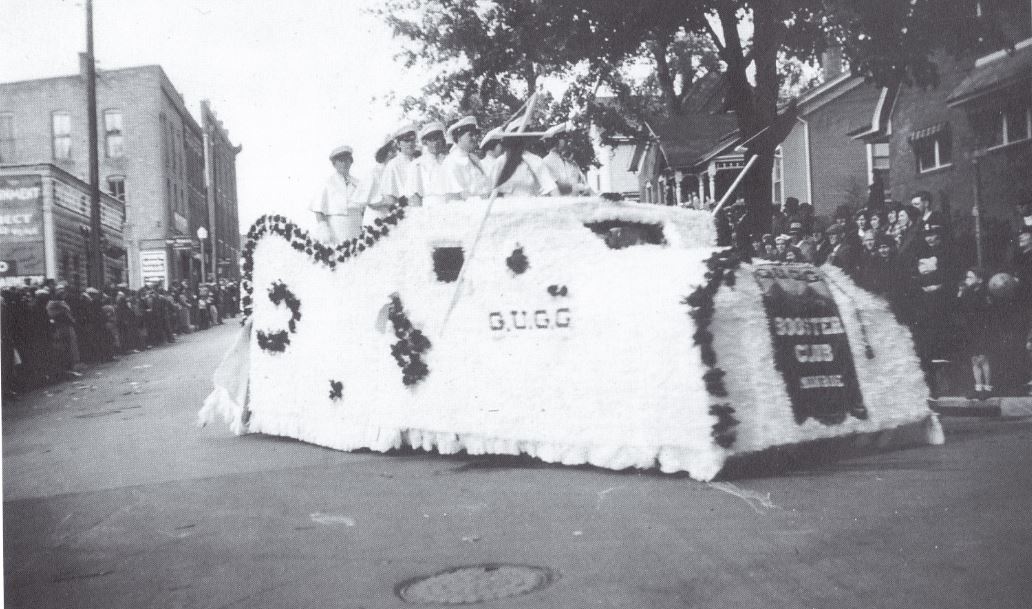 This photo features another Cheese Days Parade unit.  This one was sponsored by the GUGG, a women's benevolent group.  Many Green County communities had a GUGG chapter during the first half of the 20th century.  The last Green County GUGG chapter, located in Monroe, disbanded in the late 1980s or early 90s. 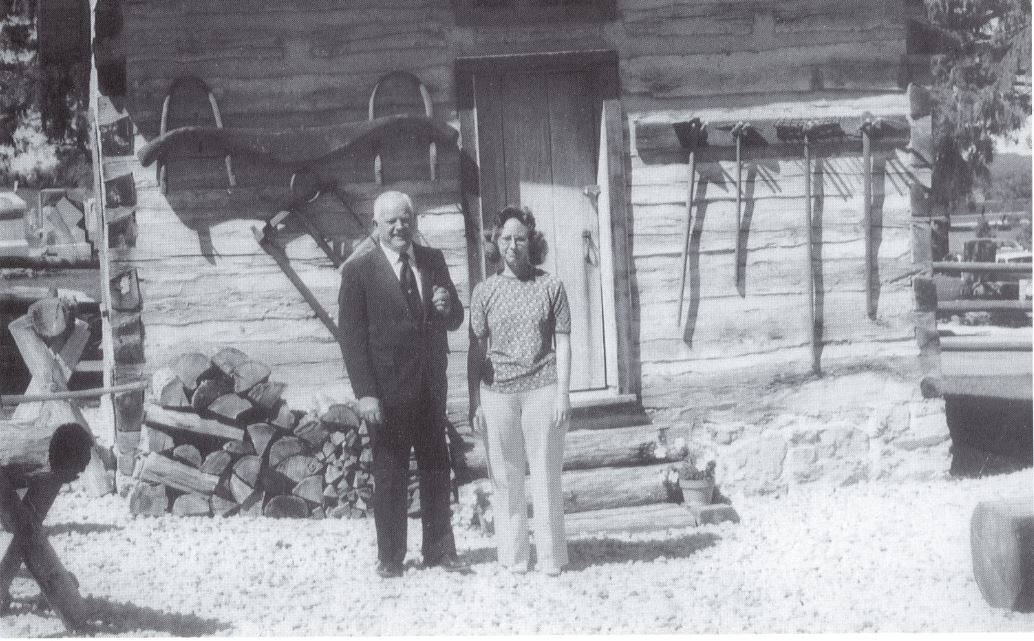 Jake Tschudy and distant cousin Terryl Judy of Prescott, AZ standing in front of the log cabin Jake discovered inside a house he was tearing down on the Harold Hoesly farm in New Glarus.  Jake took the log cabin apart and rebuilt it at the Swiss Historical Village.  This is one of the oldest extant buildings in New Glarus.  He also worked on the construction of the first log building at the Historical Village.  This past August, Terryl Judy returned to the Swiss Historical Village and donated a Tschudi family tree, tracing the family roots to its founding in 870 AD, in Switzerland. 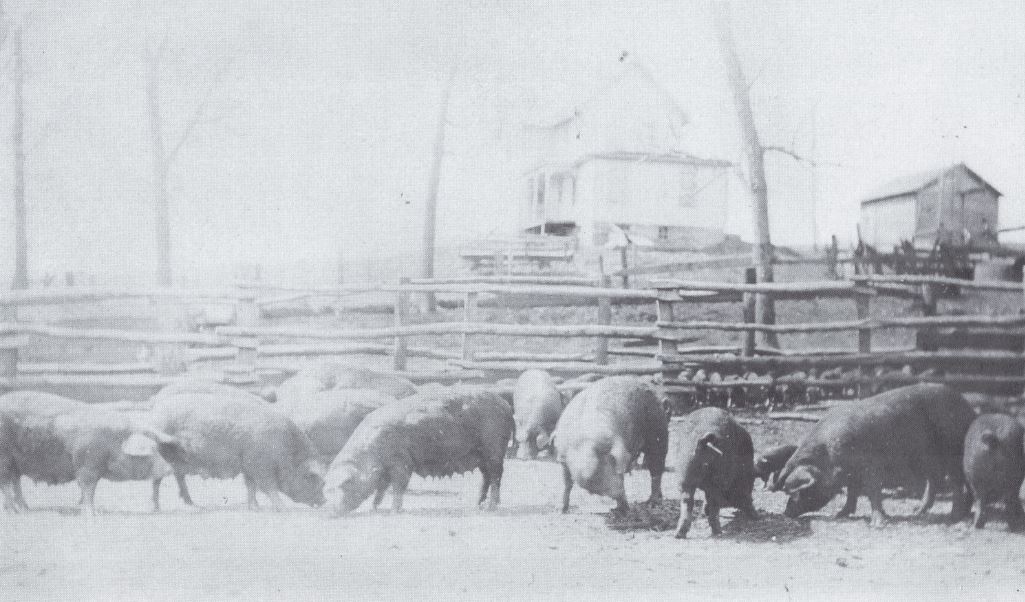 Through the 1950s most area farms were very diverse in what they raised.  The typical 120- or 160-acre farm had a dairy herd, a number of breeding sows which produced two litters of pigs for market each year, and chickens for both meat and eggs, which could be traded to local grocery stores for flour, sugar, and other staples.  The farm shown here is the Wesley Argue farm located on Argue Road.  Today this farm is the home of Argue-Ment Golf Course. 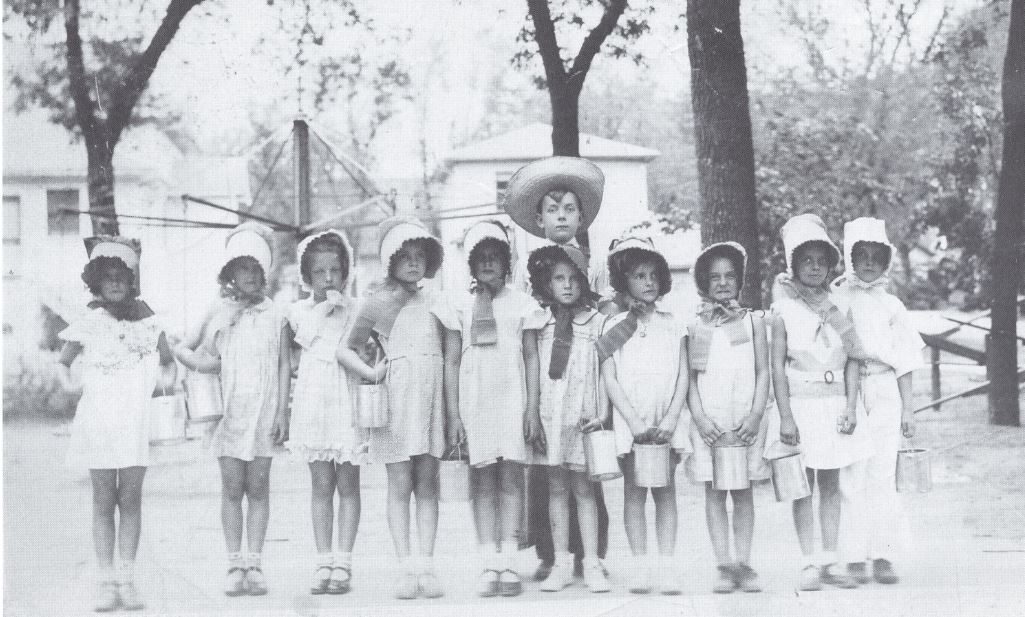 This photo features a mid-1930s Brodhead school class.  Notice the pails that each of the young students is carrying.  School plays and programs of this sort often filled the school gym with beaming parents, grandparents, and family friends.  Often the class mothers worked for weeks making the costumes for the class.