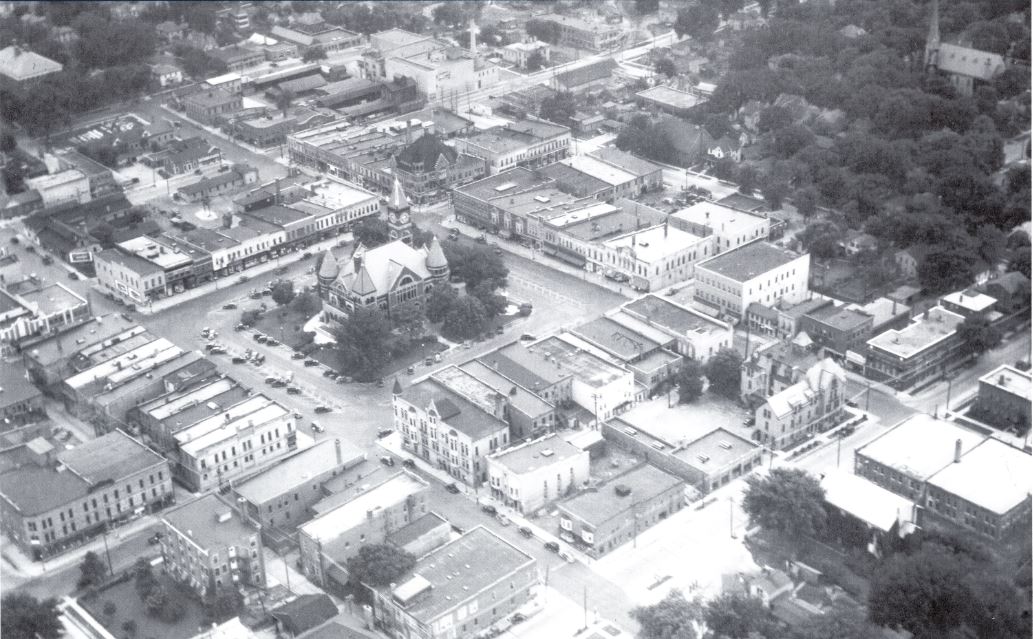 Aerial view of the Monroe Square in downtown Monroe. 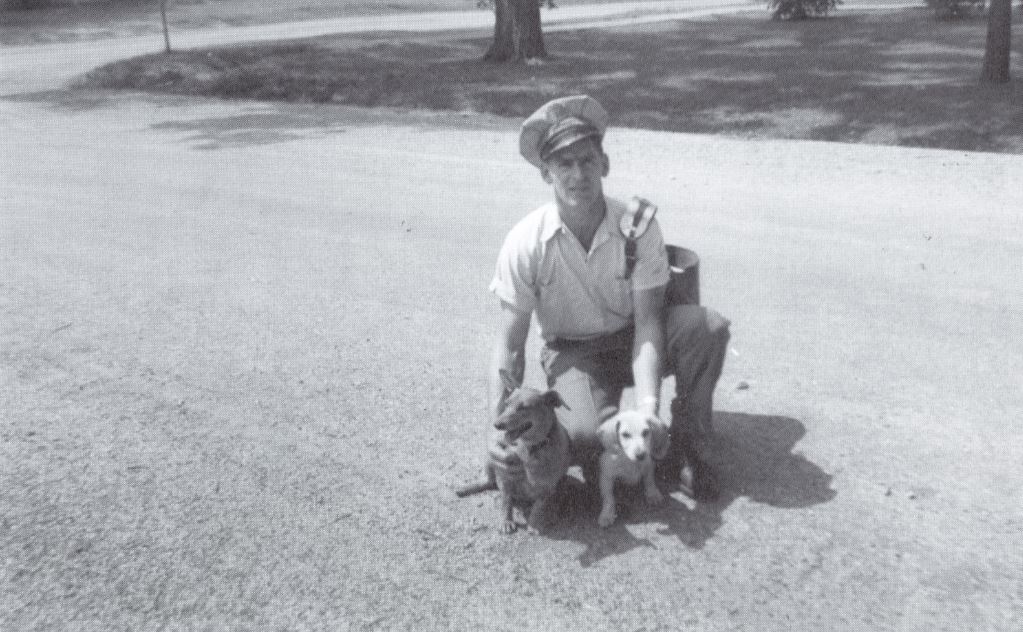 Don Mason was the first town delivery mailman in Brodhead.  At first, Don would walk carrying a bag full of mail to deliver.  Don later upgraded to a three-wheel cart to push the mail rather than carry it.  Don did this for three years and later became a rural mail carrier until is retirement in 1977. 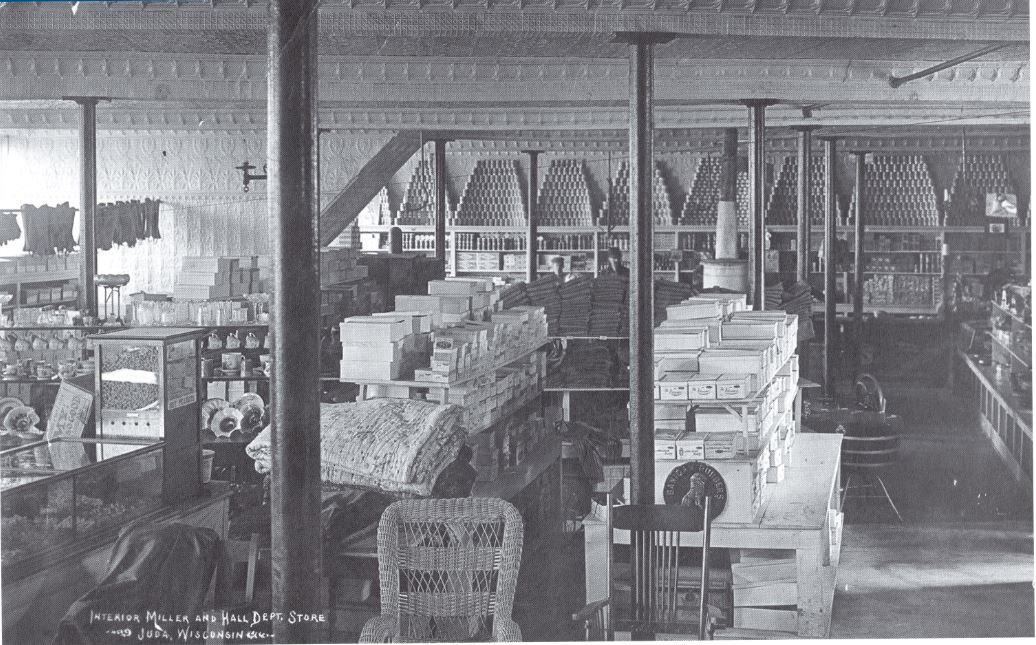 The Miller and Hall Department Store truly had something for everyone.  Most small towns in the area had a store similar to Miller and Hall that carried dry goods, groceries, hardware, and just about anything else needed to properly operate a farm or home.  The embossed metal panel decorative ceiling was often considered the sign of a well-done and maintained store.  The stacks on the back wall of the store are canned goods.

Streiff's Motel and Restaurant was built in 1951 by Fred Streiff, who in 1922 began a Chevrolet dealership in downtown New Glarus.  In 1950 he built a new garage adjacent to the motel.  The motel had approximately eight rooms and an operator's living quarters.  The motel catered to the increasing number of motoring tourists.  The restaurant portion of the business still operates today and is a local favorite for its large breakfasts. 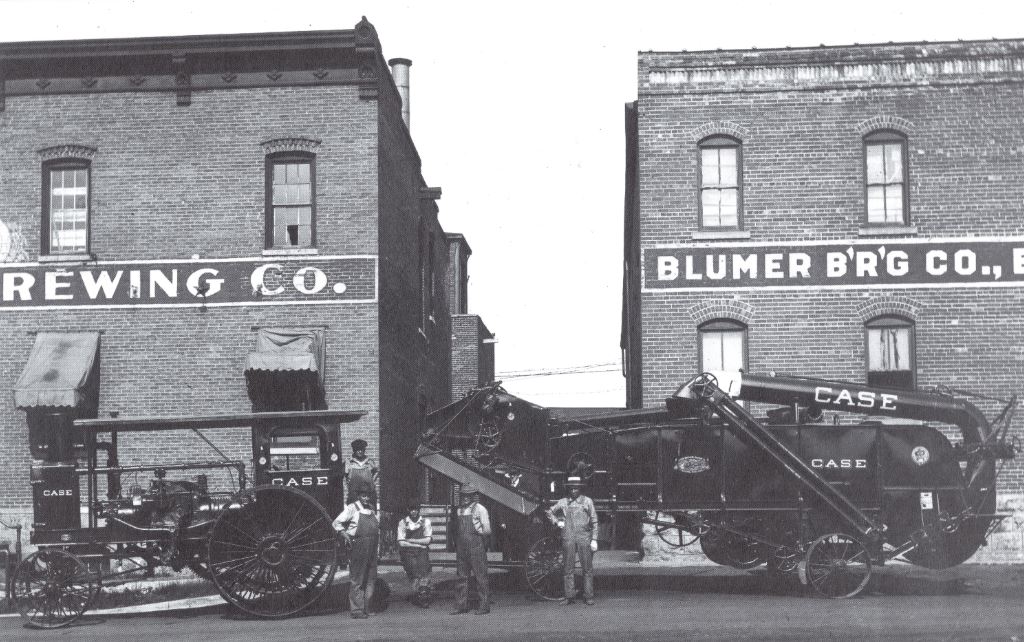 Before becoming Blumer Brewing Co. in 1906, this brewery was simply known as Monroe Brewery.  The brewery was opened in 1845 by Mr. Bissinger.  The brewery name changed to Blumer Brewing Company in 1906, under the ownership of Adam Blumer Sr.  During Adam Blumer Sr.'s years of ownership, the brewery plant was rebuilt and equipped with modern equipment.  This reconstruction gave the brewery the distinction of being a major regional brewery.  The name changed to Joseph Huber Brewing Company in 1947, then to Minhas Craft Brewery in 2006. 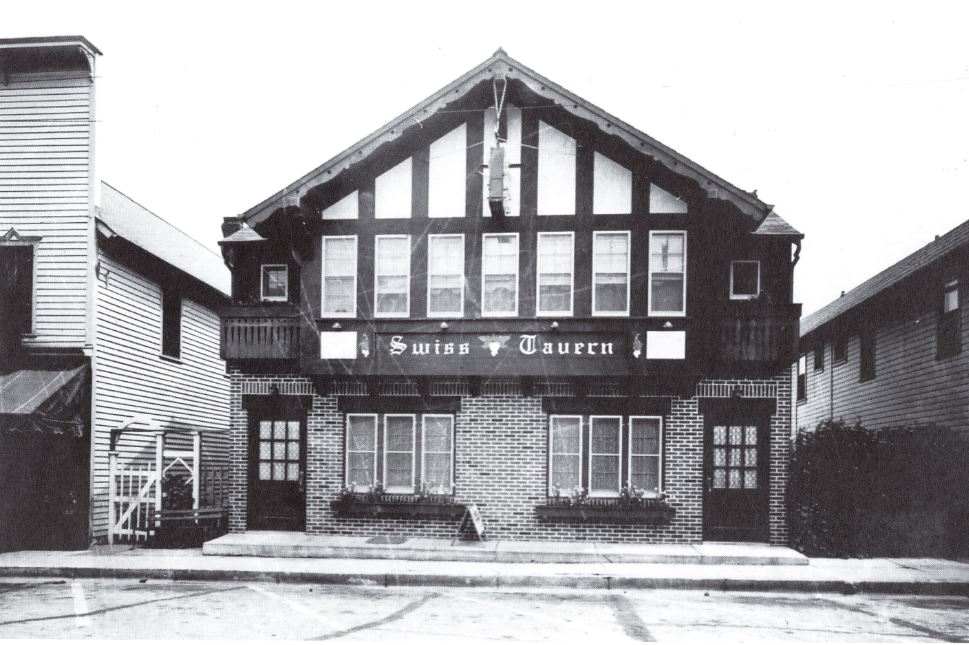 Bigler's Swiss Tavern.  Bigler's was the first authentic Swiss building in New Glarus.  Built in the 1930s by Fred and Marie Bigler, the building was probably designed by Jacob Rieder, a renowned Swiss architect who lived in New Glarus for many years until his death in the 1950s.  Bigler, a bricklayer in Switzerland, did all the brick work on the building.  Bigler's grandson, Chuck, has kept alive the Bigler name in the tavern business in New Glarus.  Chuck and his wife own and operate Puempel's Olde Tavern, which was featured in the Wisconsin Public Television documentary "Bottoms Up." 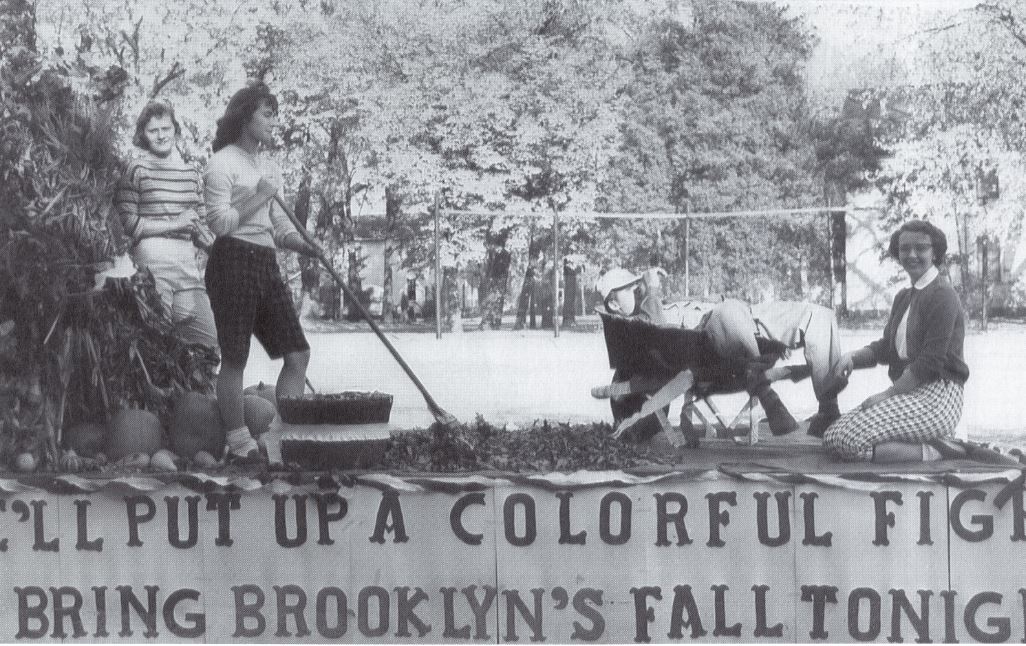 This picture was taken during the Brodhead Homecoming '57 parade.  Judy Kundert-Erickson, June Pence-Meyers, and Darlene Severson are fiding their class float that won first place with a slogan of "We'll put up a colorful fight to bring Brooklyn's fall tonight." 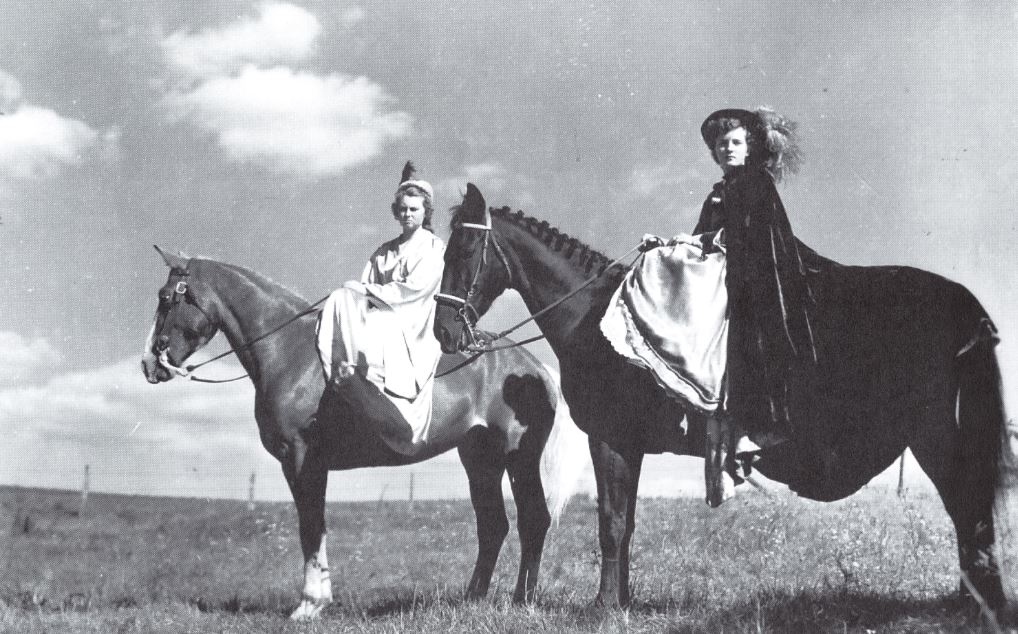 This photo appears to be a promotional photo taken for the Wilhem Tell Pageant performed annually in New Glarus since 1937.  Not much is known about this photo or who the two women are.  The one on the left is the Lady in Waiting and the other is Bertha von Bruneck.  It is thought that the horse in the foreground is Major, owned by longtime Tell actor Paul Grossenbacher. 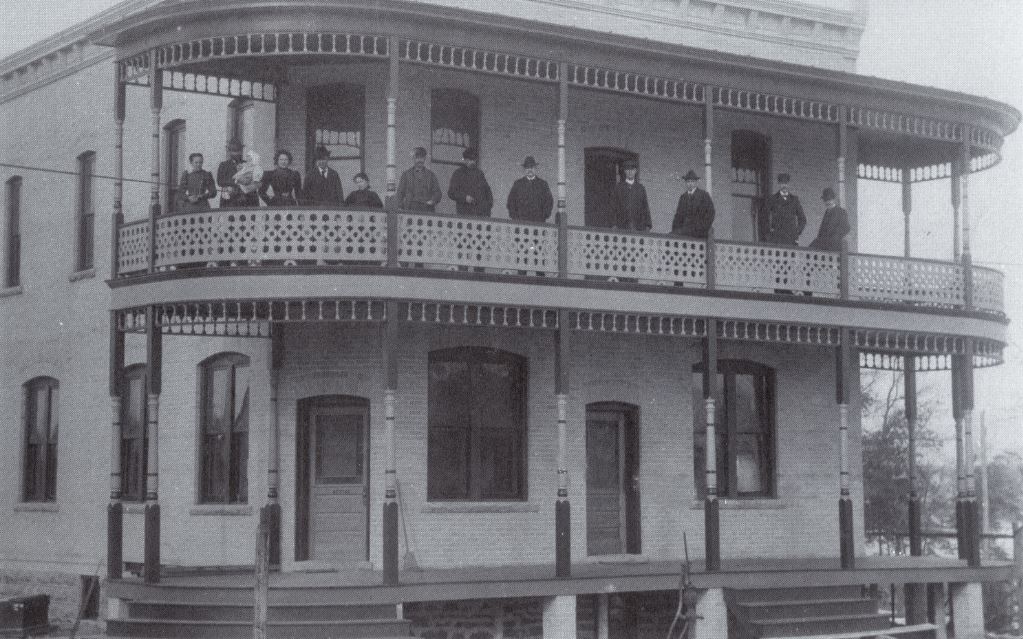 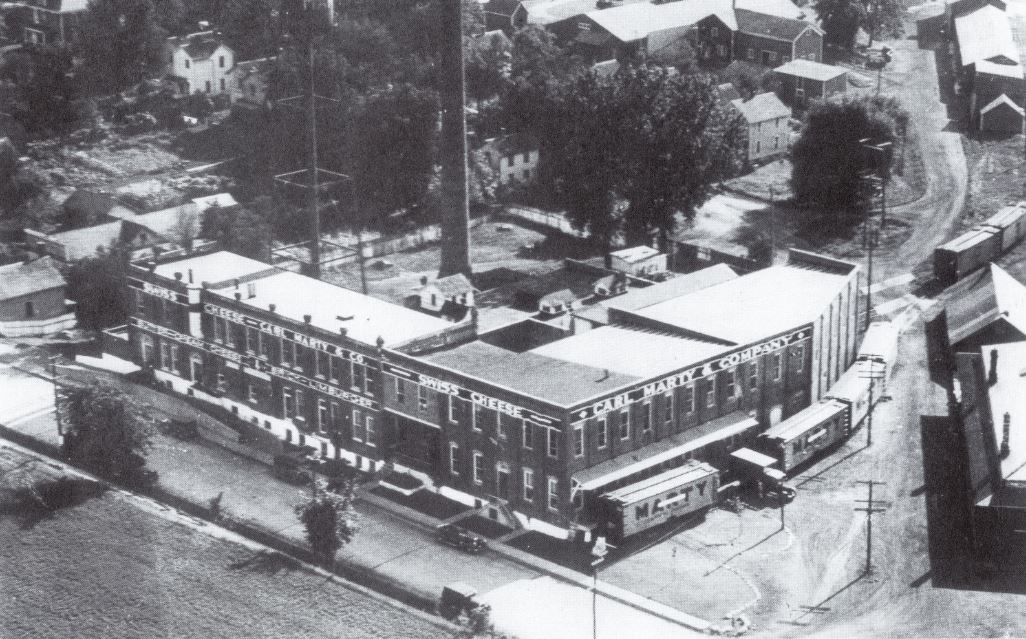 Marty Cheese was started by Carl Marty Sr., a native of Gachnang, Canton Thurgau (Switzerland), who was born in 1873.  His cheesemaking career began in 1887 helping to make cheese at the Tom Carey factory in the Town of Adams, Green County.  He then spent a year working as a farmhand to learn about farming.  With his savings he went to a business school in Milwaukee to learn bookkeeping.  Throughout his life, he owned and operated numerous cheesemaking operations.  In 1946, he built and operated the Northernaire Lodge at Three Lakes, Wisconsin.  An avid collector of early cheesemaking equipment, he donated much of his collection which is on display at the Swiss Historical Village in New Glarus.  Carl Marty was also an accomplished artist, and in his lifetime completed more than 600 paintings.  A number of his paintings grace the walls of Turner Hall in Monroe. 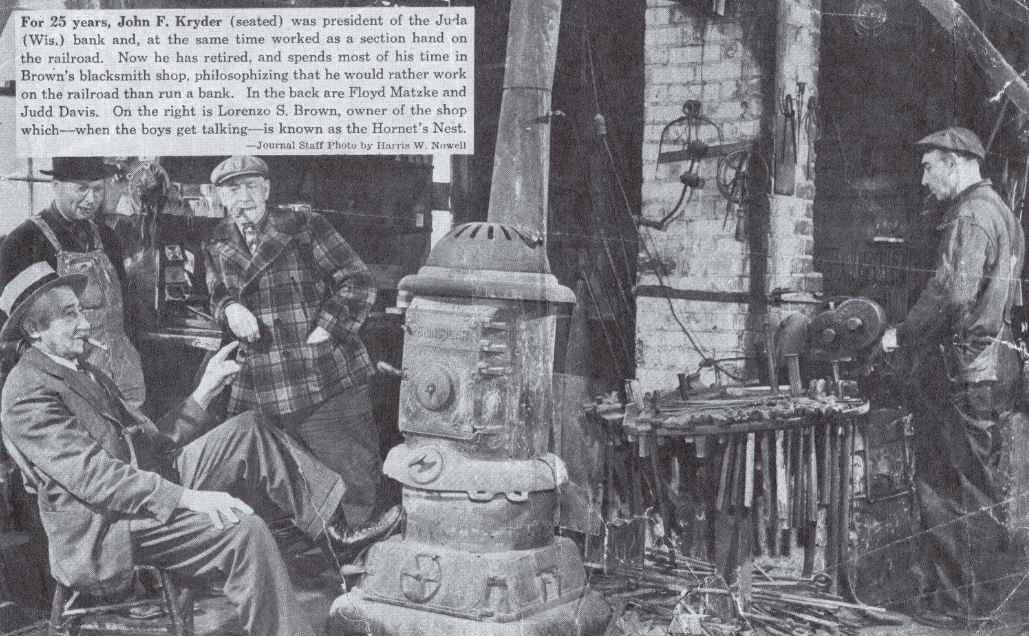 For 25 years, John F. Kryder (seated) was president of the Juda bank, and at the same time worked as a section hand on the railroad.  Now he has retired and spends most of his time in Brown's blacksmith shop, philosophizing that he would rather work on the railroad than run a bank.  In the back are Floyd Matzke and Judd Davis.  On the right is Lorenzo S. Brown, owner of the ship which - when the boys get talking - is known as the Hornet's Nest. 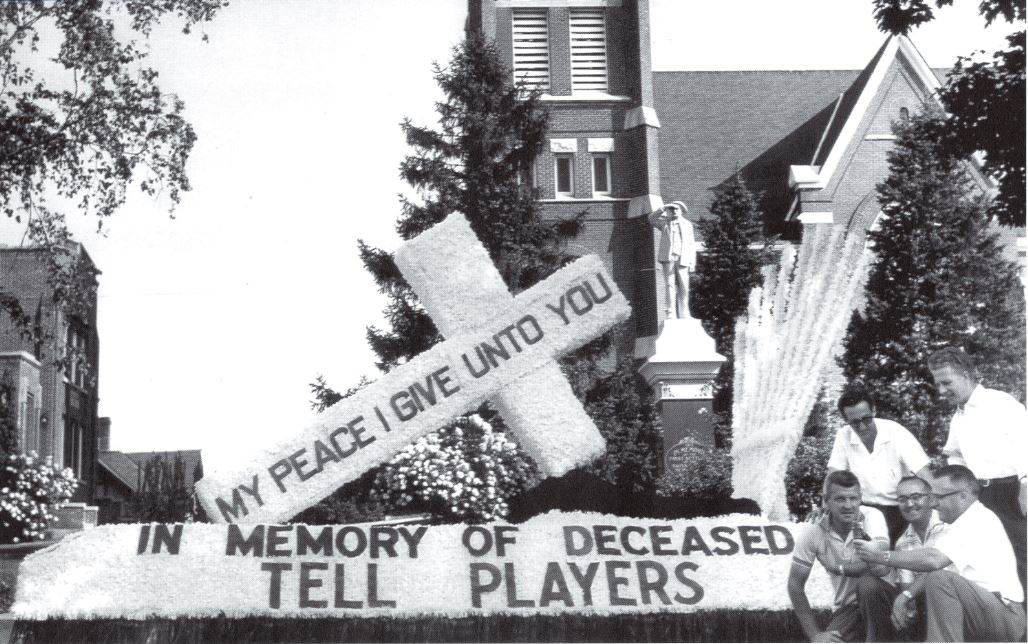 This early 1960s photo of the Tell Guild float, In Memory of Deceased Tell Players, was done by the Wilhelm Tell Guild which presents Schiller's Wilhelm Tell Pageant annually on Labor Day Weekend in a beautiful valley just east of New Glarus.  The first Tell festival was the work of Edwin Barlow, a former New Glarus resident who had witnessed the Wilhelm Tell Drama in Switzerland.  During the 50s and 60s, New Glarus events garnered press coverage from across the country.  Shown in this photo are front row (left to right): Waldo Freitag, Jerry Disch, and a sound engineer from WIBA radio in Madison.  Back row: Millard Tschudy and Robbi Schneider.

Masks are currently optional for all visitors.  Our pickup window remains open six days a week for those who are not comfortable coming inside.