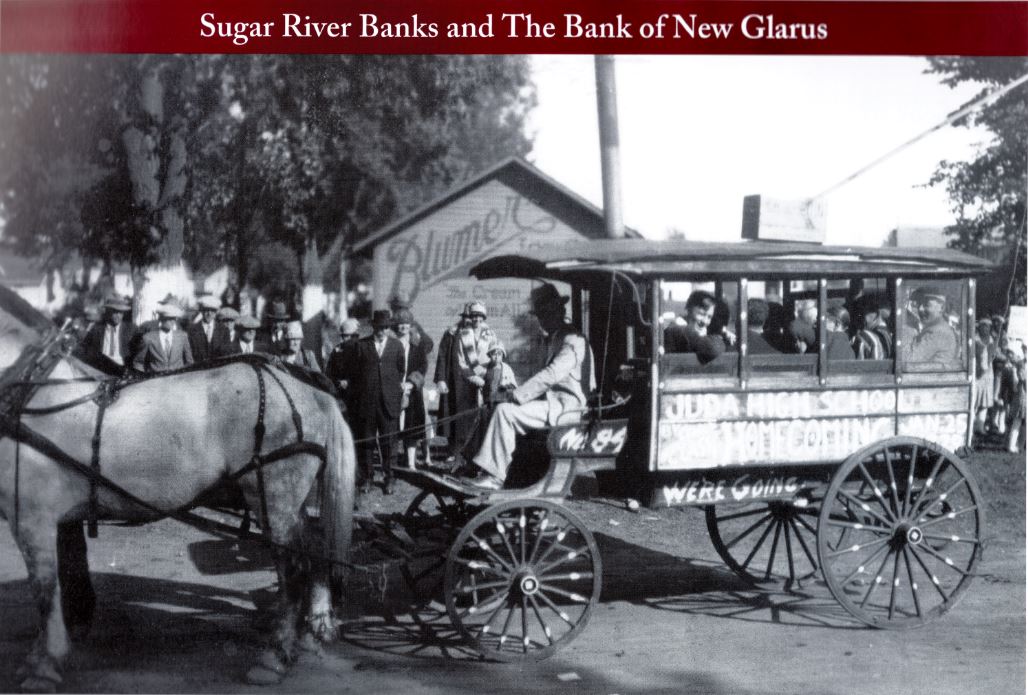 Juda High School was apparently promoting Juda's Homecoming (held January 25, 1929) during an event in Monroe.  Could it have been an early Cheese Days parade?  Looks like the football team in the carriage.  The "Blumer's" building in the background was located at the Green County Fairgrounds.  Blumer's served beer here.  "The Cream of Them All" the sign read.  The building stood where Monroe Optimists now sell cheese curds at the fairgrounds. 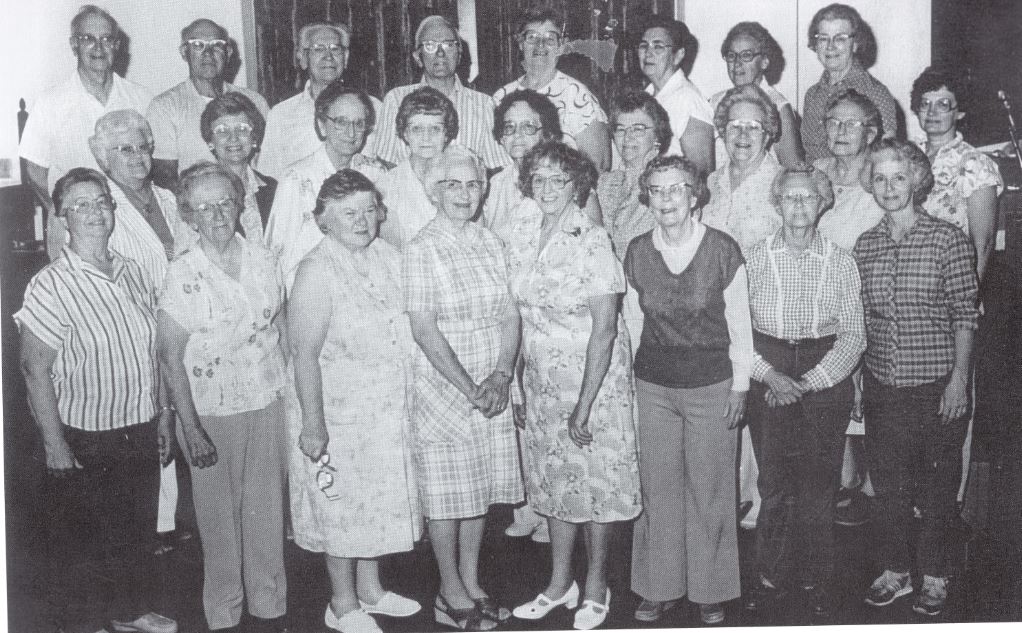 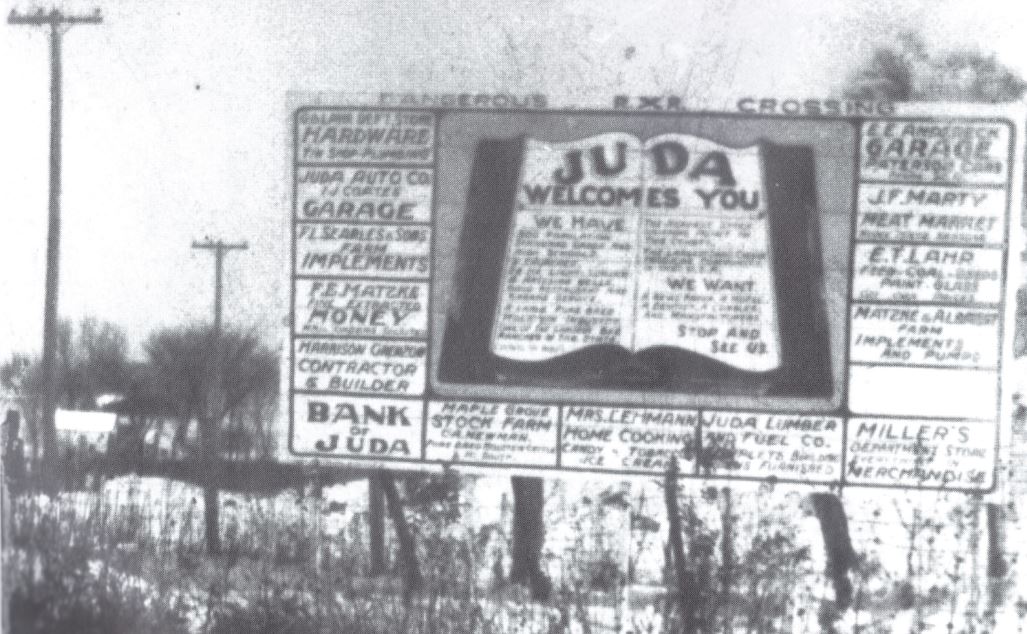 The "Welcome Sign" for Juda must have been located near the railroad tracks.  Note the top of the sign "Dangerous RXR Crossing."  It is estimated the sign was pre-1920s.  The Bank of Juda, established in 1903, supported the village along with all the other businesses.  One of the businesses (left side of the sign), Searles and Sons Farm Implement, was located where Carter and Gruenewald is today.  JF Marty Meat Market (right side of the sign) was located in the old GB Lahr Building whtere the current Sugar River Bank-Juda now stands. 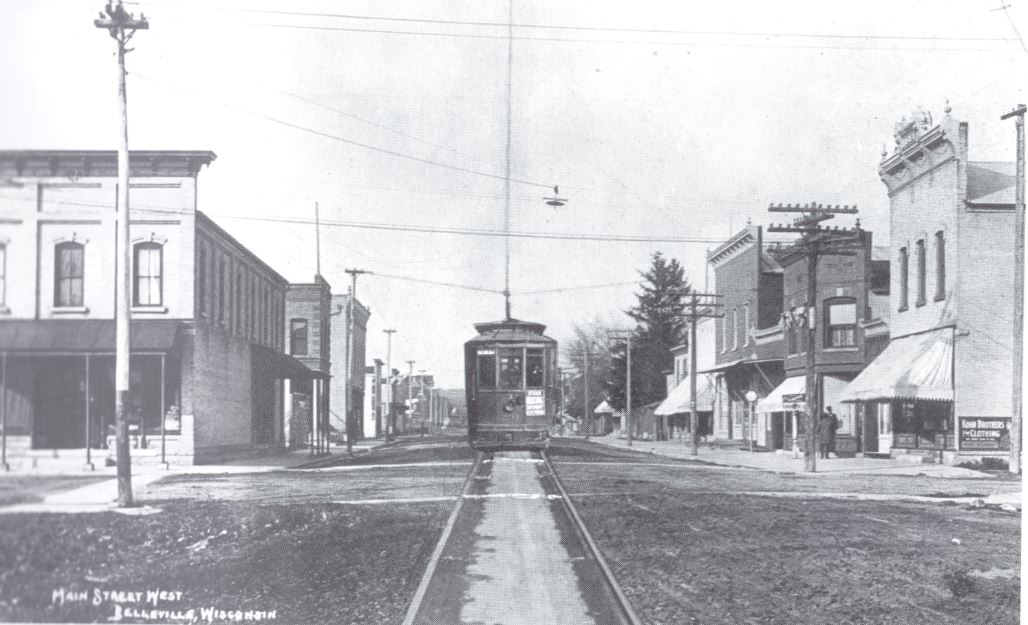 Taken around the turn of the century, this photo of Belleville's main street faces west.  The building on the left side of the photo currently holds Action Guitars, Express Fitness, and GL Rehab.  For many years it was the local grocery store operated most recently by Lehnherrs and then Jim Olson.  On the right is the old Willoughby building that was torn down to build a new building now housing Landmark Cooperative.  Next is the John Deere Building, now the Ale House, bordered by the Old Becker Furniture store, currently Belleville Printing Co.  The last large building is currently home to Patches and Petals quilt shop. 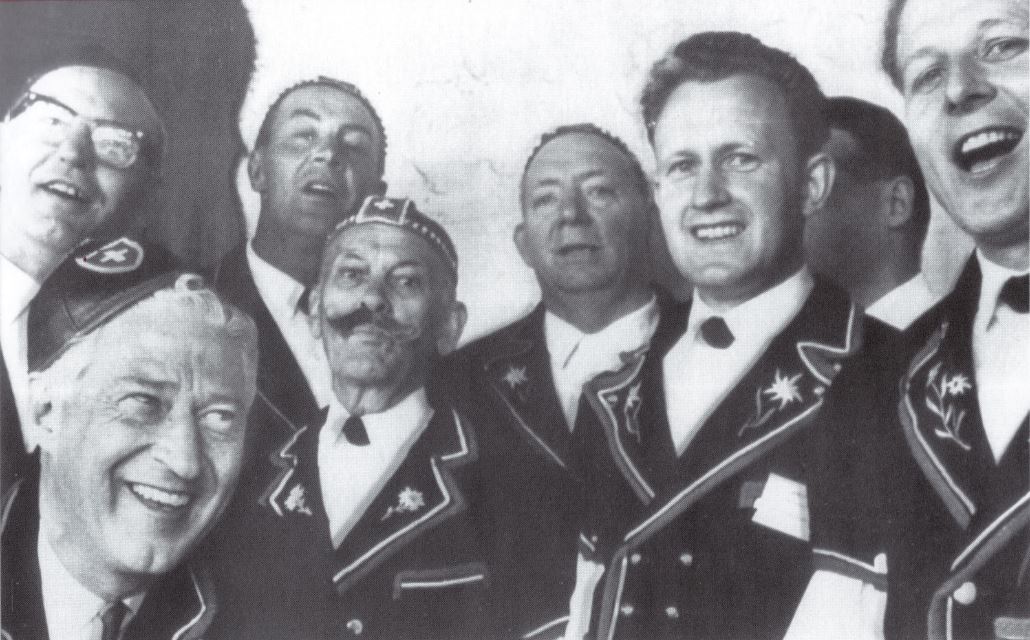 In May 1964 the Hiawatha Pioneer Trail opened.  The trail was a 2,100 mile driving tour of Iowa, Minnesota, Wisconsin, and Illinois.  The brainchild behind the Hiawatha Pioneer Trail was the American Petroleum Institute.  THis photo was taken on May 27 for the grand opening of the trail through New Glarus.  The New Glaurs Yodel Club entertained and was joined by Governor Warren Knowles.  First row: Governor Knowles, Ernie Thierstein, Ernie Jaggi, Robbi Schneider.  Second row:  Paul Grossenbacher, Karl Luescher, William Ruef, Sr., unknown. 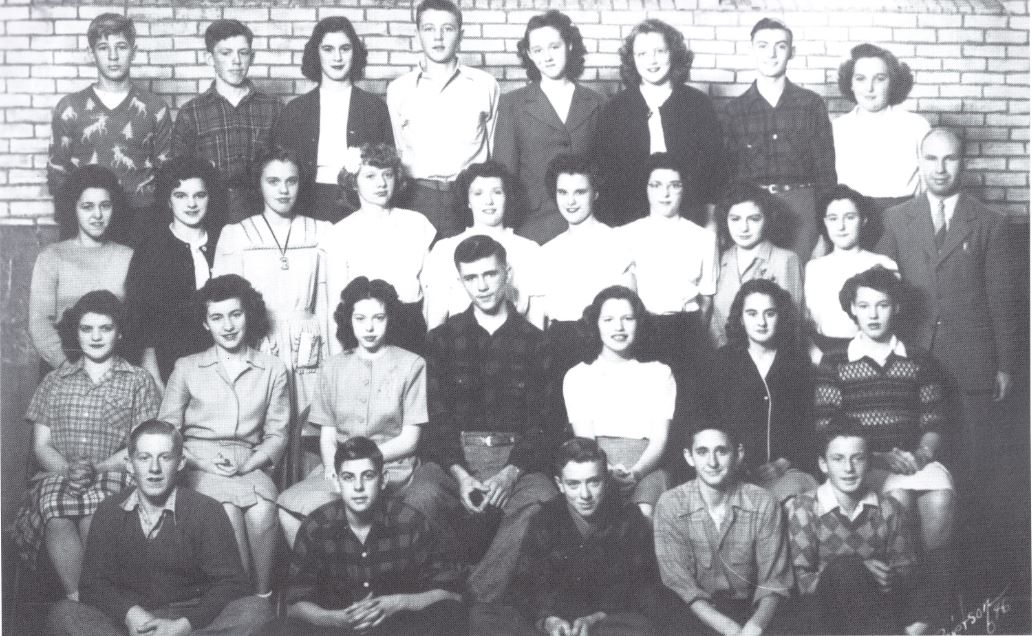 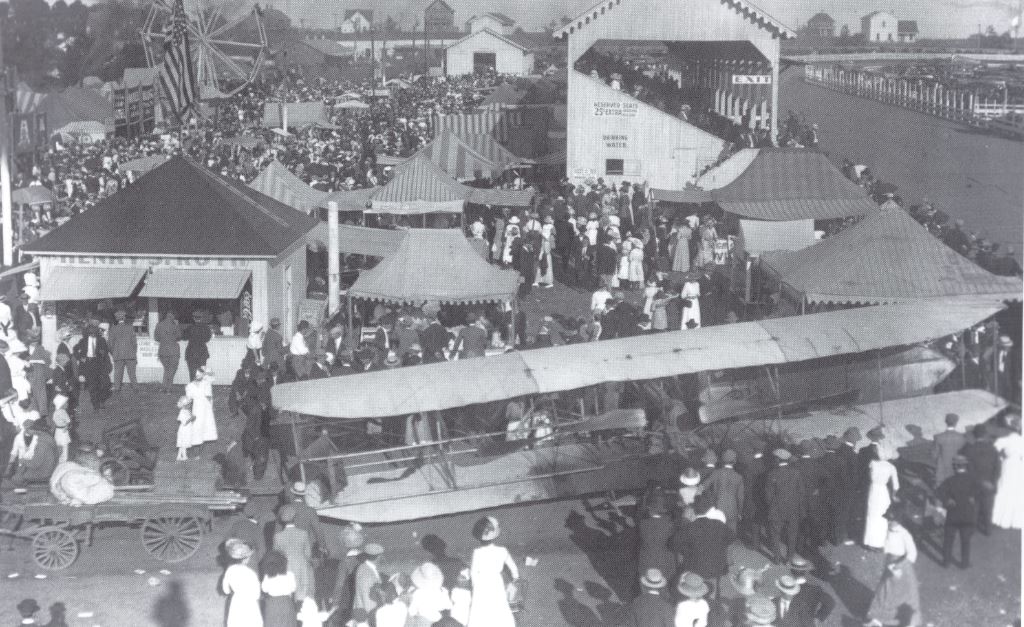 Could this have been the 1909 fair?  It was one of the most successful in the first 100 years of the Green County Agricultural Society and the Mechanics Institute.  Several firsts occured at this fair - the first carnival and the first night fair.  E.F. Carruthers of Chicago suggested putting on a carnival as the main entertainment at the fair.  This show, traveling in its own train of 12 cars, would have been the largest attraction to appear in Monroe up to that time.  Mr. Carruthers stated that they had several free acts, but charged for rides such as the ferris wheel and the merry-go-round. 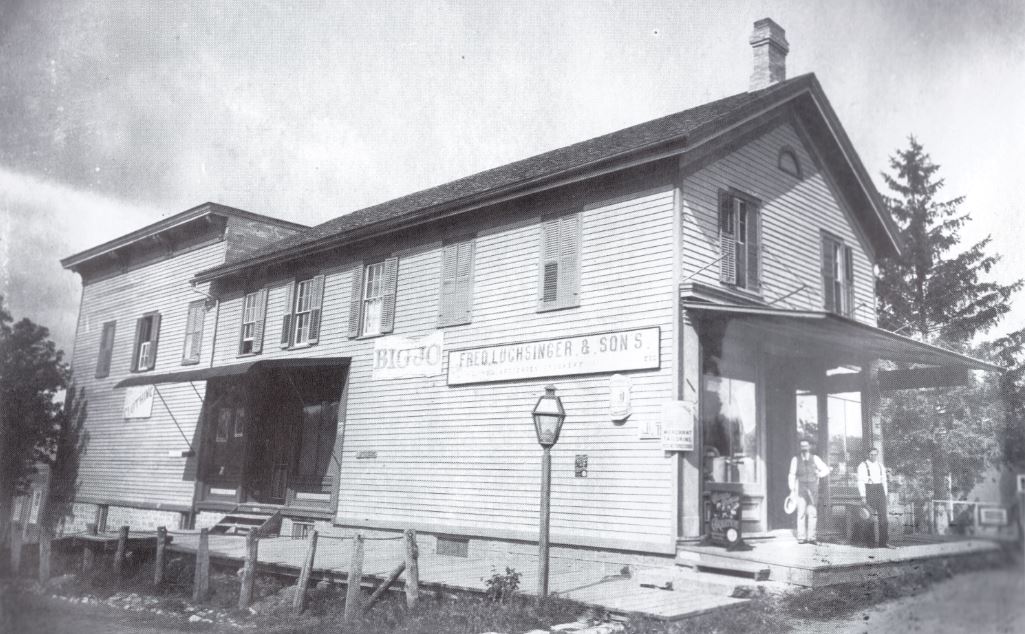 Fred Luchsinger & Sons was a general store and cheese factory in Belleville.  The building eventually burned.  It was located at the site of the current Belleville Police Department. 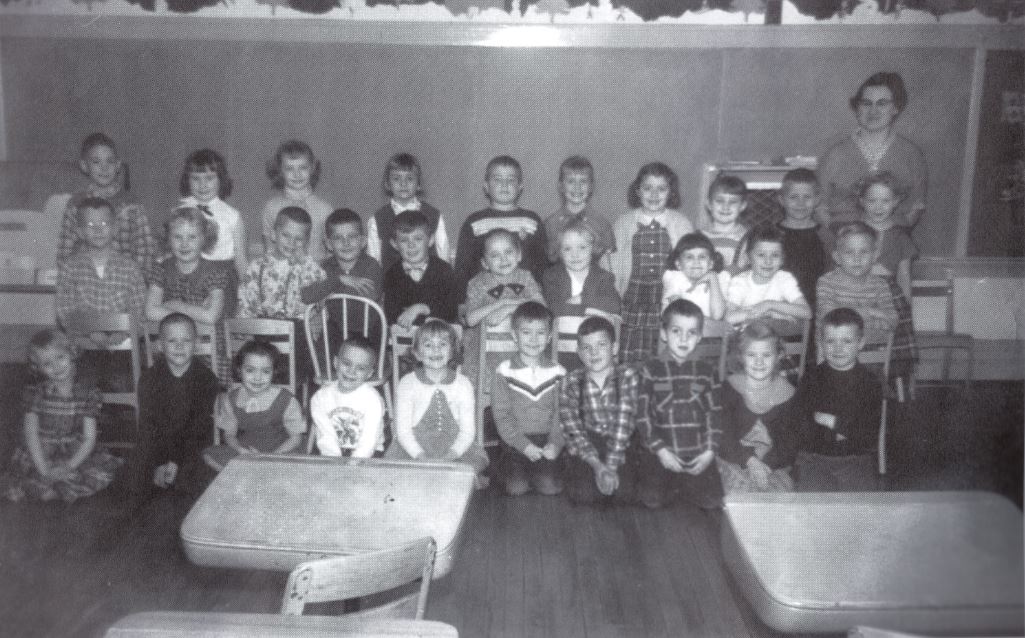 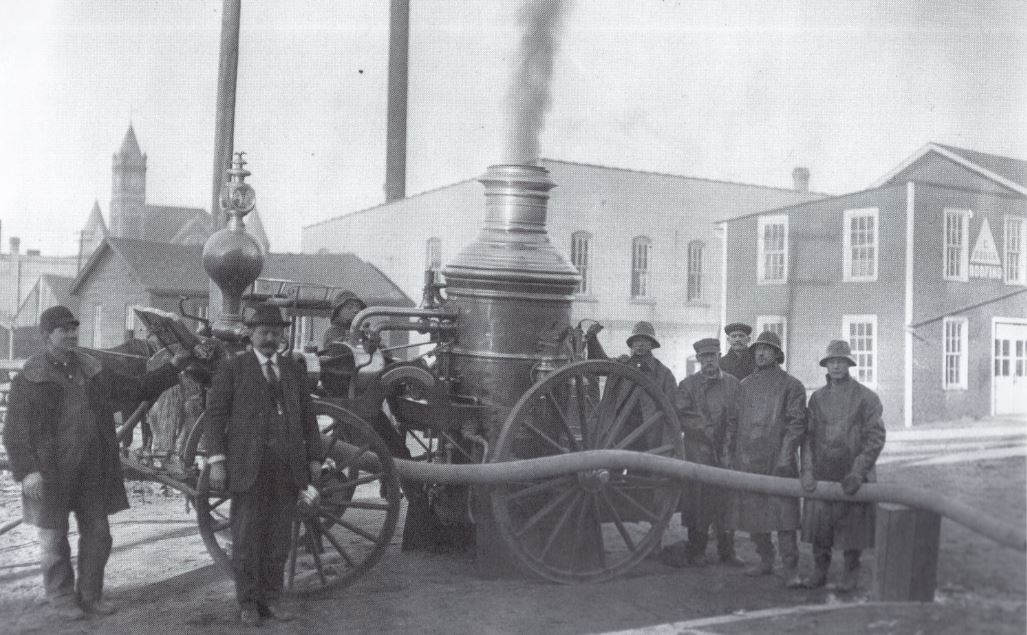 The Monroe Fire Department has come a long way since this photo was taken.  The department was formed in 1858 and has evolved into a progressive state-of-the-art firefighting organization.  They currently operate out of their headquarters as well as a substation with over 50 on-call firefighters and 2 full-time employees.  They are rated in the top 4% of fire departments nationwide.  Can anyone identify any of these firemen or have any information on when this photo was taken? 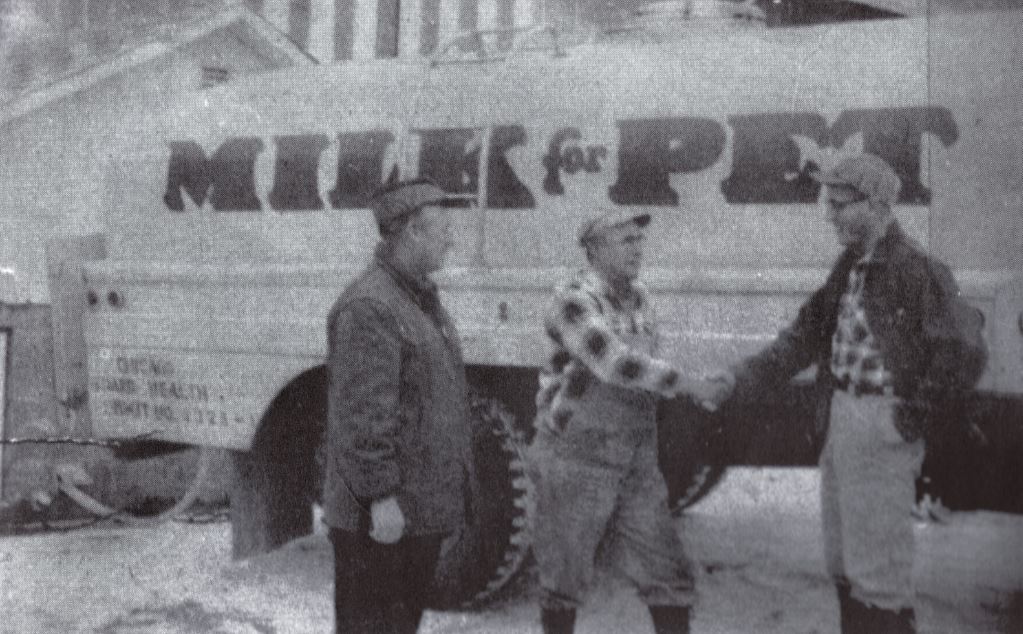 Dean Streiff (right) is congratulated by milk hauler Rudy Schiess (center) and Pet Milk Company field man Floyd Haden (left).  Dean and his family farmed on his father's farm for many years.  His sone Matt and family now live on the farm. 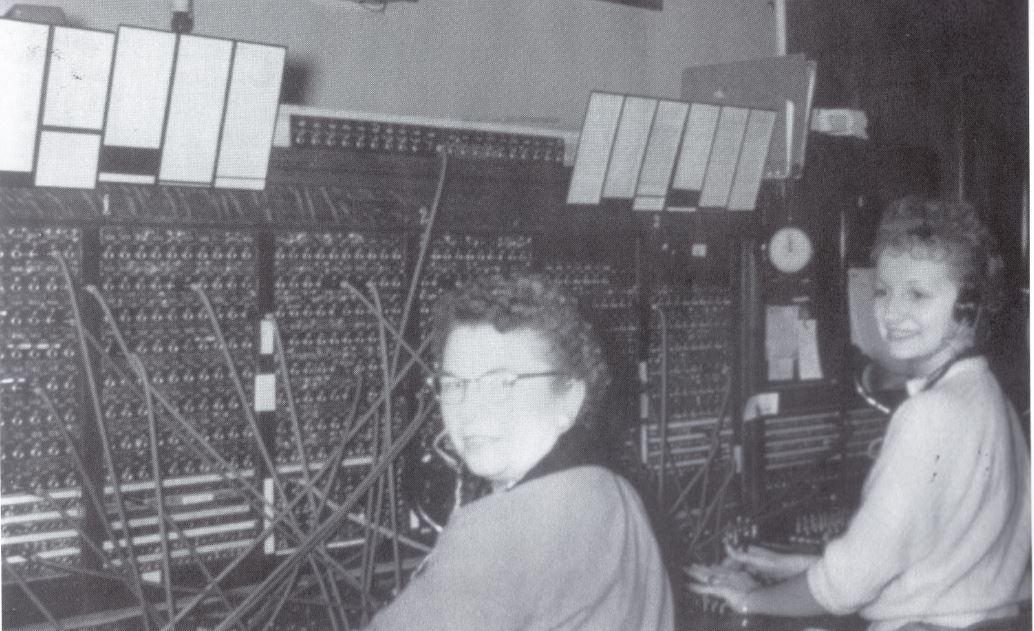 This photo, taken in December 1959, shows Frances Rostad and Shirley Myers Hahn working at the Brodhead Telephone Office.  This was Shirley's first job, which she started in 1955 at 16 years old.  She worked there until dial phones came to town.  Her grandmother Pearl Myers also worked there.  The Brodhead Telephone Office was located on the second floor above John Paul Meichtry Barbershop on Exchange Square.  The building was owned by the Green County Bank at the time.  Shirley remembers there were three local switchboard operators on duty along with lone long distance operator.  The Chief Operator was Maude Bowen.  Shirley said, "This was my favorite job!"