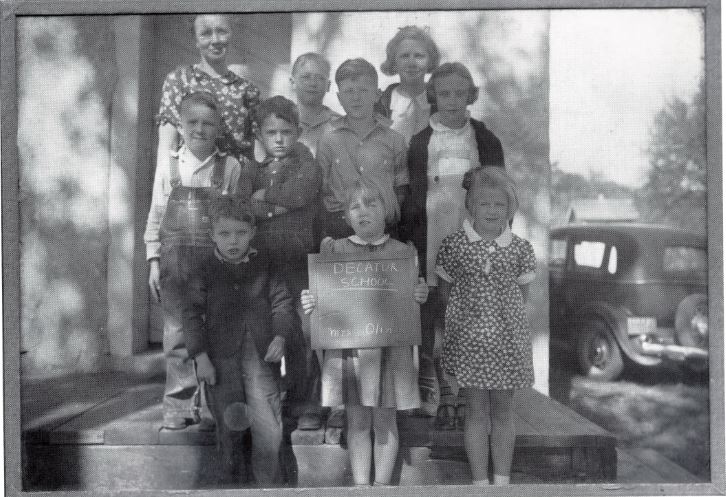 Taken about 1940, this photo shows the students and teacher, Thelma Olin, of Decatur School.  The school, located on Decatur Road, housed students from first through eighth grades.  The students included Charles Paris, Elizabeth (Shrier) Malcook, Donald Berryman, Duane Schneider, Brodus Paris, Janet (Lederman) Utschig, Duane Phillips, Marilyn McCasslin, and Margarit (VanSkike) Gadow.  Classes began in the first school house, which was built of logs, in 1845.  A stone schoolhouse was built in 1852 at a cost of about $500.  Schools ceased operating in Decatur in 1965. 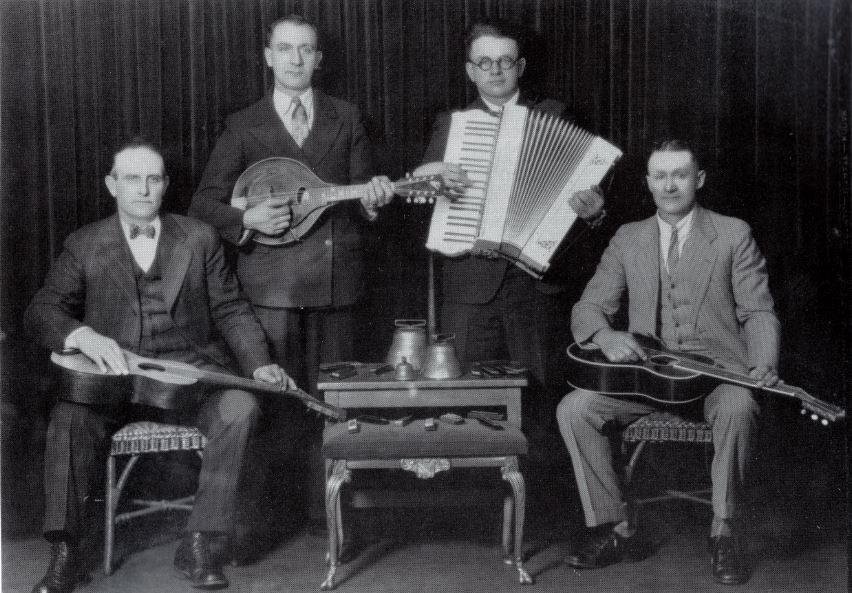 This quartet, composed of John R. Voegli, Waldo Luchsinger, Vernie Kruger, and Sam Luchsinger, posed for a photo in 1927.  The group took care to display the additional instruments they played, including bells and harmonicas. 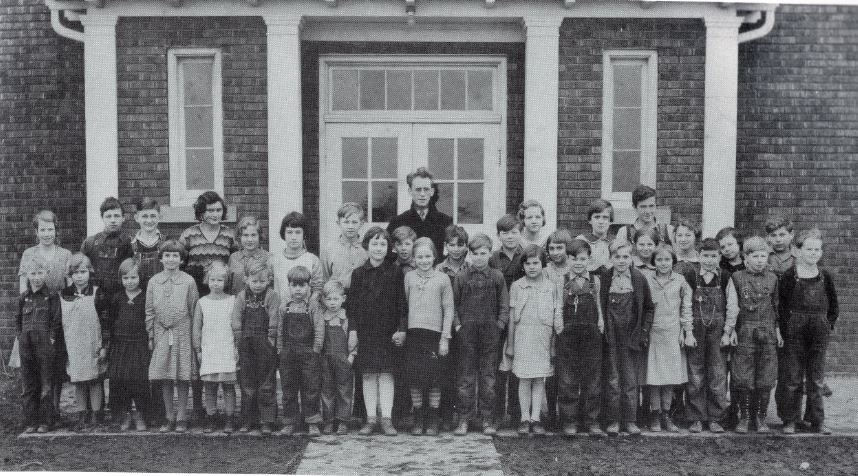 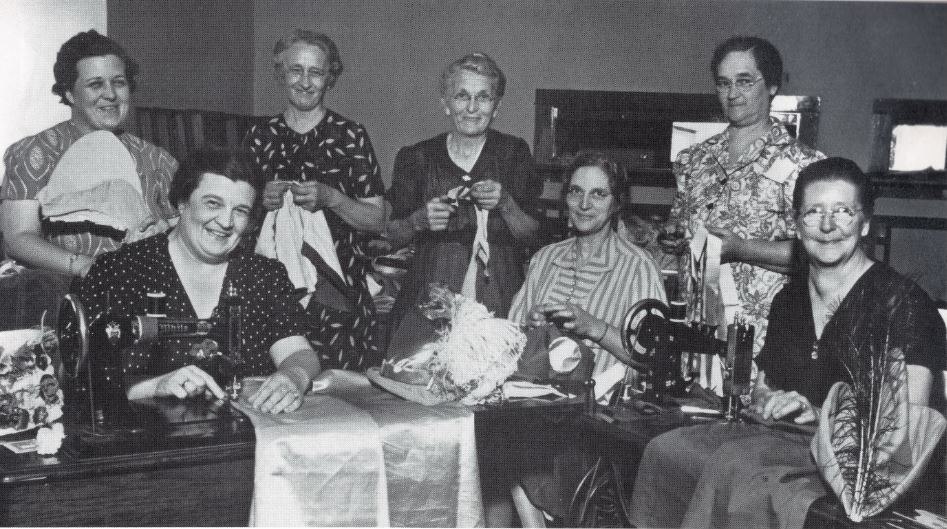 Our historical calendar isn't the same without a photo related to the Wilhelm Tell Guild.  Since the first drama in 1938, generations of families have played important roles in this New Glarus event.  The ladies pictured here worked on the true art of the drama - the wonderful costumes.  This photo was taken in 1939 or 1940 in the basement of the Zwingli House, adjacent to the Swiss United Church of Christ in New Glarus.  Seated:  Mrs. Esther Stauffacher, Mrs. J.U. Freitag, and Mrs. Jacob Elmer.  Standing:  Dora Ott, Anna Duerst, Agatha Hoesly, and Mrs. John Kundert. 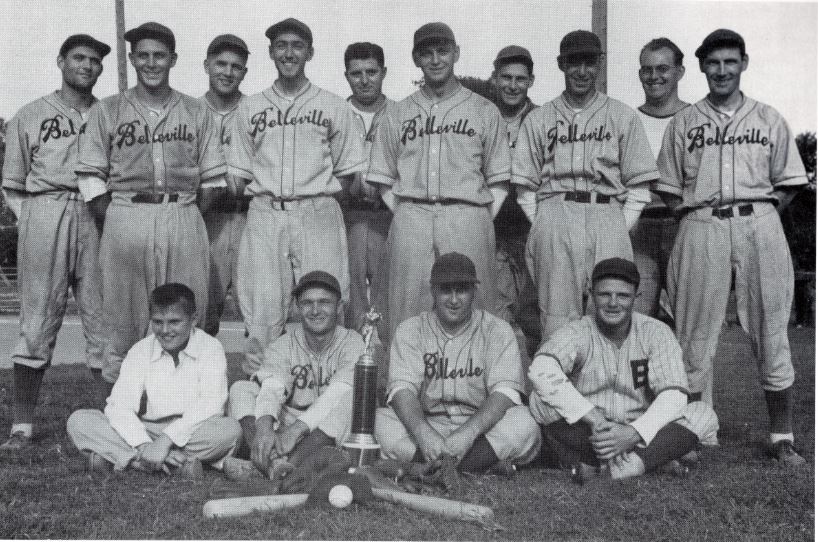 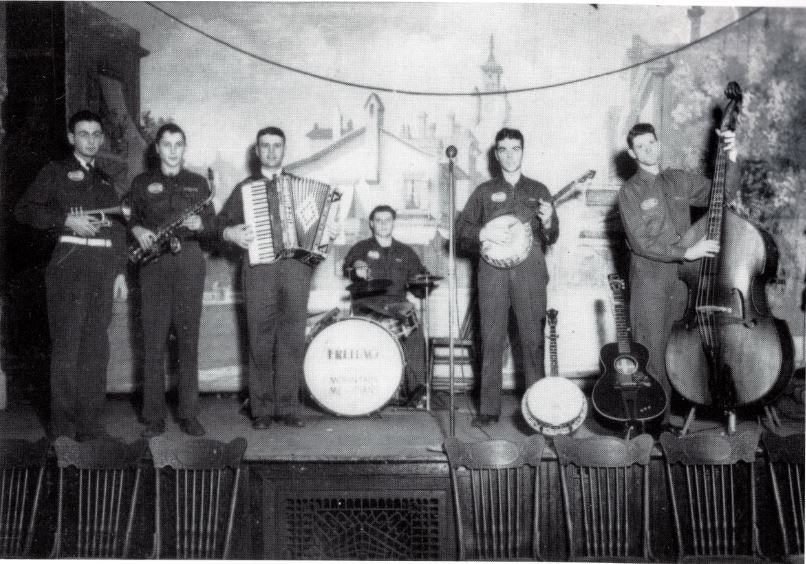 The Mountain Melodians, a musical group from Belleville, posed together for this photo in 1940.  The group played together for 20 years, for a price of $5 per night, and played in area communities such as Belleville, Brodhead, Brooklyn, Evansville, Monticello, and Monroe.  Left to right: Bernard Freitag, leader; Cliff Conahan; Ray Ellis; Phil Booth; Leo Piller; Norman Brager. 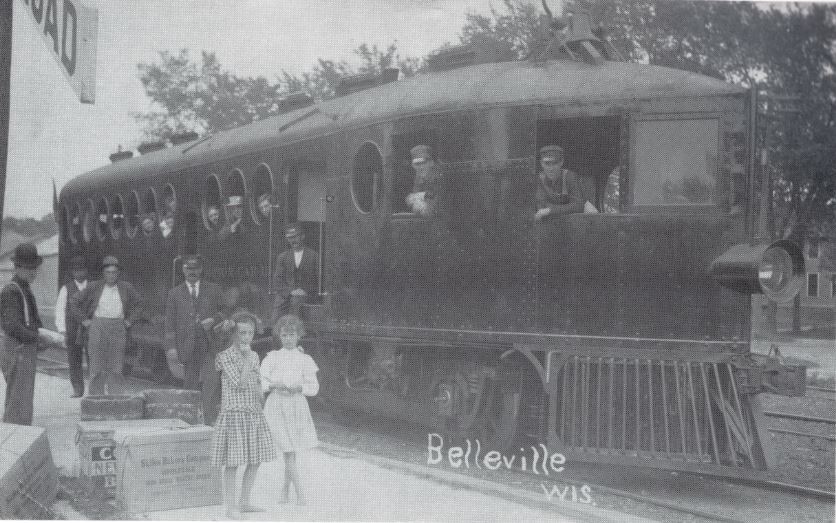 At first glance this photo appears to be of a train, but if you look closely, it is really a "rail bus."  The rail bus operated as a single car, unlike a train, which consisted of the engine, cars, and caboose linked together.  When this photo was taken, around 1912, railway was the most popular form of transportation.  The rail bus connected Madison with Freeport, IL and made stops in Belleville.  Although we can't tell from the photo, the rail bus was bright red, and had earned the nicknames "Doodlebug" and "Red Baron."  Only one person from the photo has been identified - the young girl in the checkered dress is Helen Minch. 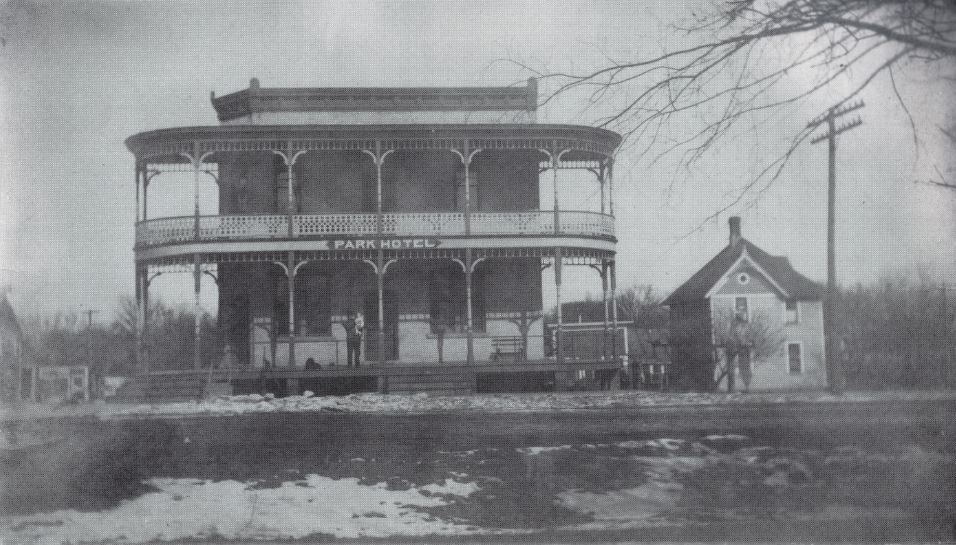 This Belleville landmark still stands today, on the corner of East Main and South Vine Streets, although it looks much different and is currently the home of D&L's Suburban Inn.  The first Park Hotel was a wooden, frame building built in 1898.  It was torn down, and this brick creation constructed.  This photo was taken around 1900.  An interesting feature of the hotel was the "sample room" in the basement, where traveling salesmen could feature their wares.  The intricate upper and lower verandas were removed in the 1920s and 1950s, respectively.

Straight out of the movies - a runaway train!  This excerpt from the September 17, 1908 edition of "The Brodhead Independent" tells the story:  "While a crew of the Albany train was at dinner last week Friday, some member of the Italian crew, which had been at work here for some days, wished to move the train a short distance, and accordingly opened the throttle to the engine a trifle.  Having gone the necessary distance, he attempted to stop and found he could not do so.  After several attempts, he gave up, little thinking as he jumped off that he had left a number of women on board to the mercies of most any fate.

As it started, the engine rammed into the cars which were ready for the return trip to New Glarus, and with them started toward Juda.  It was nearing time for the freight (train) and much apprehension was felt for those on board lest the two trains should meet.  A dispatch was sent ot Juda to sidetrack, but it was too long.  A terrible smash-up was averted, however, by the engine on the run-away "dying" about a mile this side of Juda.  The front of the wild engine was somewhat damaged by contact with the coaches, otherwise little damage was done." 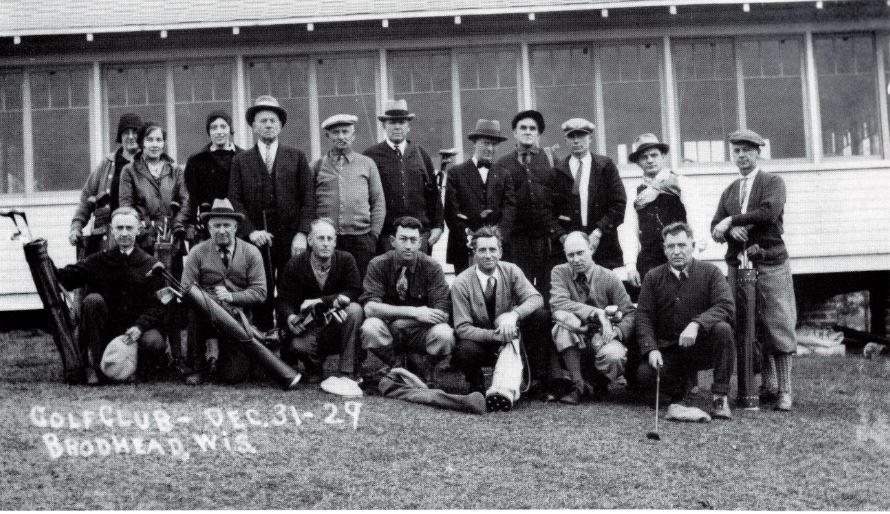 This photo was taken at Decatur Lake Country Club, Brodhead, which opened in 1927.  Some of those identified include: (standing) Carrie Pierce, Jean Howard Freeman, Kathryn Davis, Ferris Nolty, Gramp Gardner, unkown, John Olmsteadd, Clyde Rossiter, unknown, Dan Markham, Gorder (first name unknown), and (seated) unknown, C.J. Coldren, Frank Parker, unknown, unknown, Carl Wagley, and Hamp Fleek.  The clubhouse had been demolished by a tornado in 1930 or 1931 and rebuilt.  That building was torn down and a new one erected in 1960. 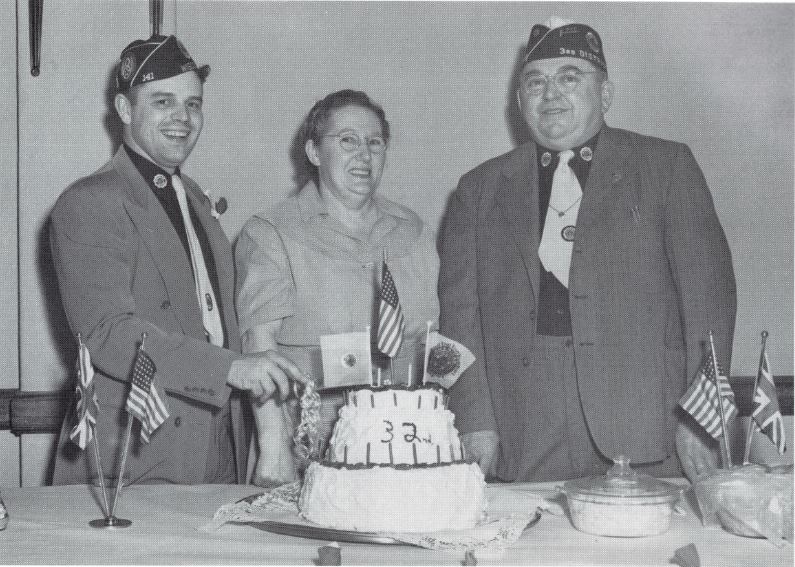 Shown celebrating the 32nd anniversary of the Stuessy-Kuenzi American Legion in New Glarus are, left to right, George Hartman, Florence Marty, and Jake Bruni.  At the time of this photo, in 1951, Hartman was serving as Legion Commander, Mrs. Marty as president of the Auxillary, and Bruni as Commander for the county. 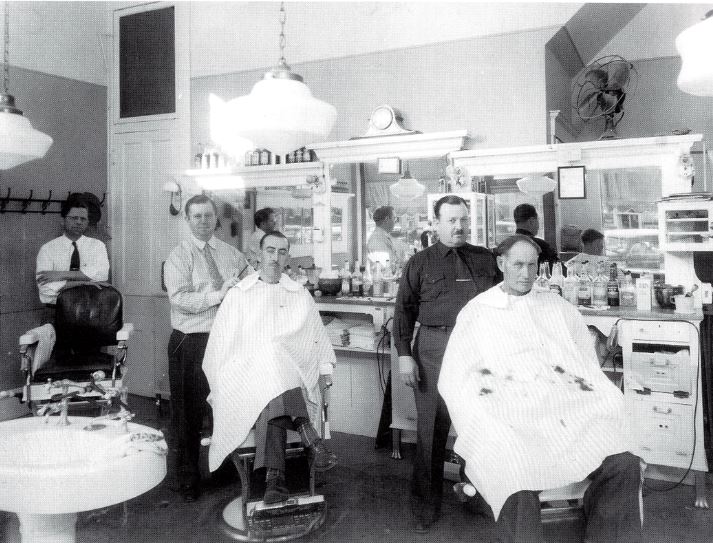 Jeff Vogel believes this photo inside his grandfather's Brodhead barber shop was taken sometime in the late 1950s.  The barbers, standing left to right, are Lawrence Hyerdahl, "Mac" McElroy, and the shop's owner, O.W. Bragger.  The customer on the left is Bob Riese, the other man's name is not known.