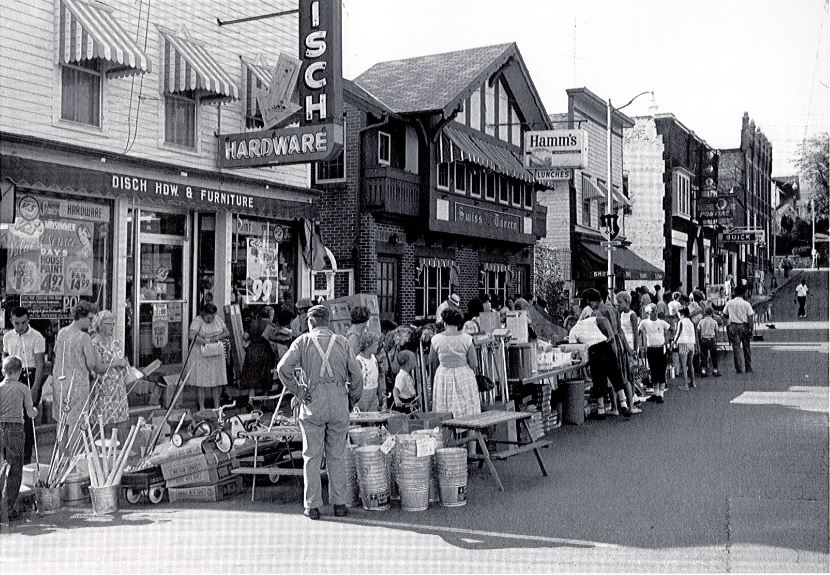 Sidewalk sale in New Glarus - a big tradition in town.  This photo was taken sometime around 1960 by Carter Lueders of Belleville.  Gerald Disch of Disch Hardware and the late Walt Wenger of Walt's Toggery were early promoters of "Maxwell Street Days."  Walt's wife, Ruth, says Walt hit on the idea from another town holding such an event. 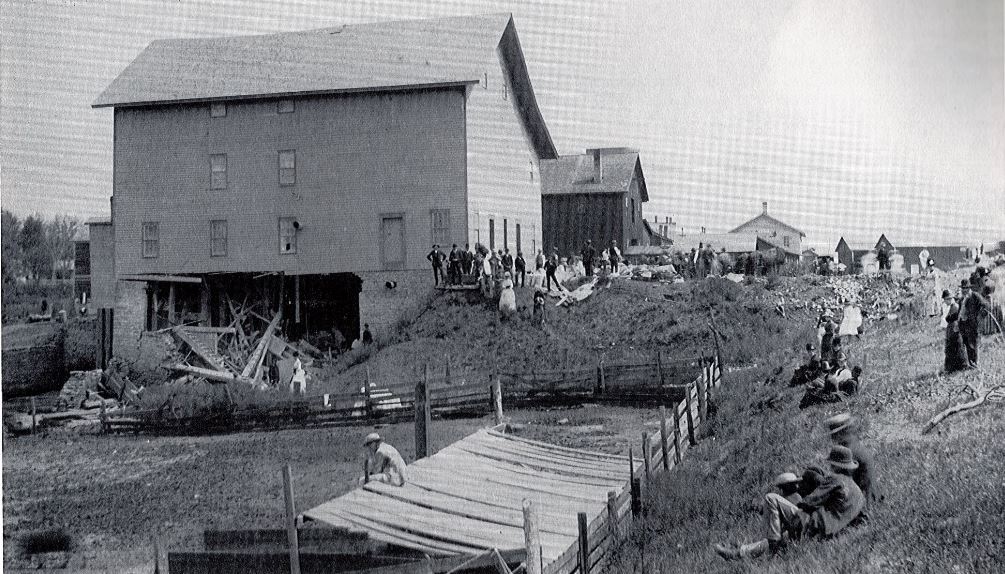 The Brodhead Flour Mill began operating in 1863.  As this photo shows, the foundation collapsed in August of 1889.  According to notes on the back of the photograph, the mill was later moved to the south and a power plant was constructed at the mill's former location. 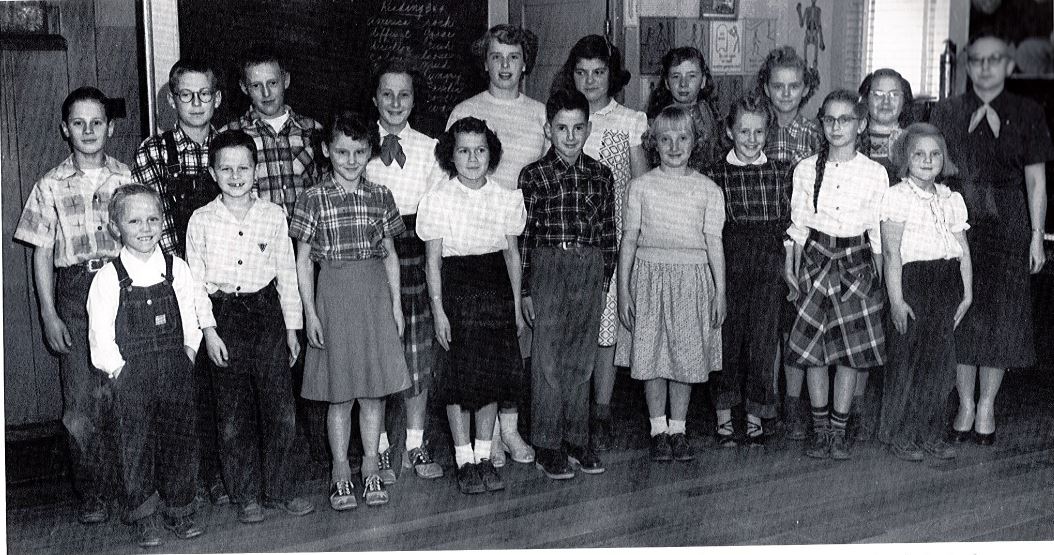 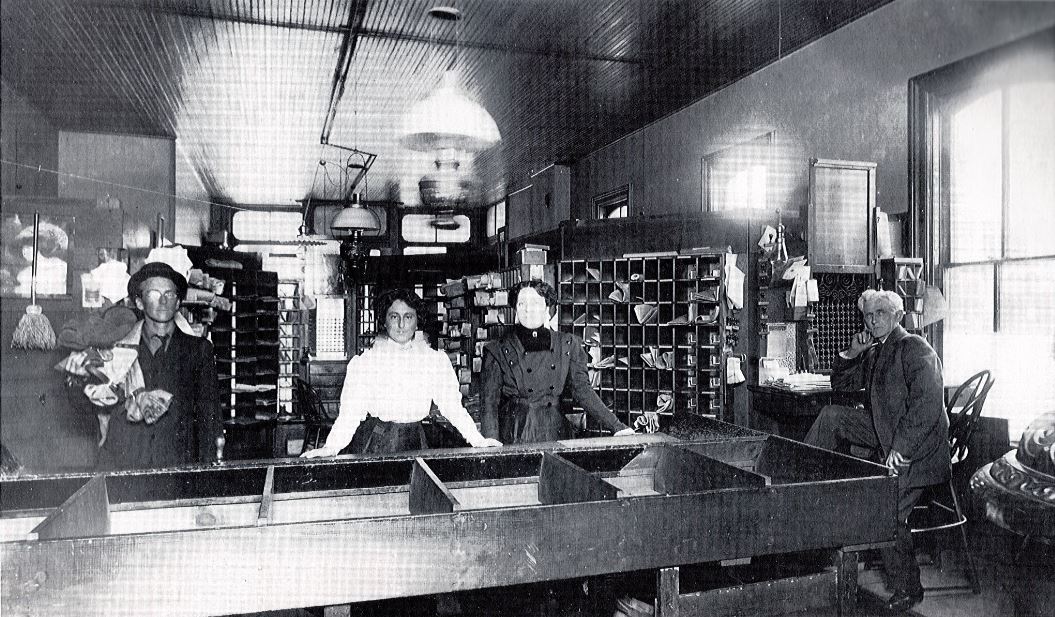 This photo of the Brodhead post office was taken around 1911.  The employees are, left to right: Dan Collins, Lottie Kildow, Amanda Wolden Gilbert, and Mr. Kildow. 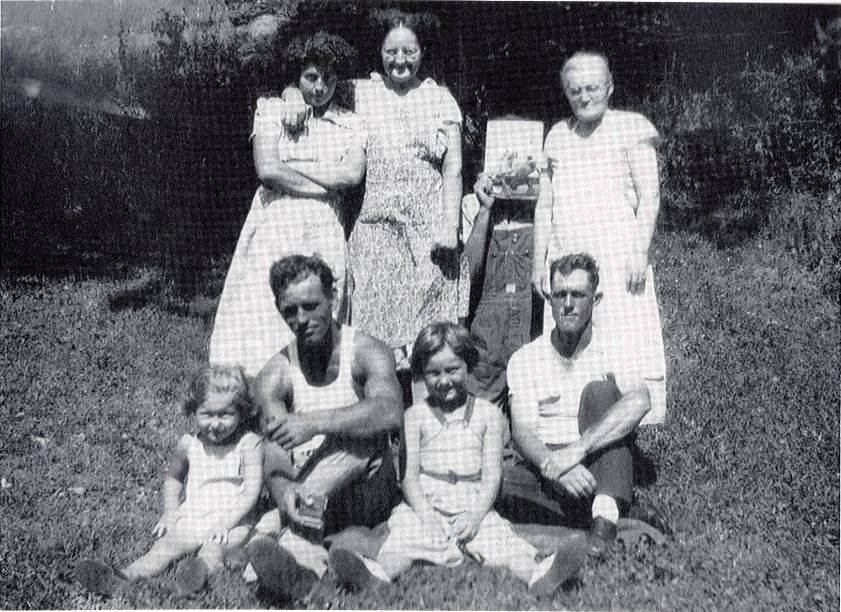 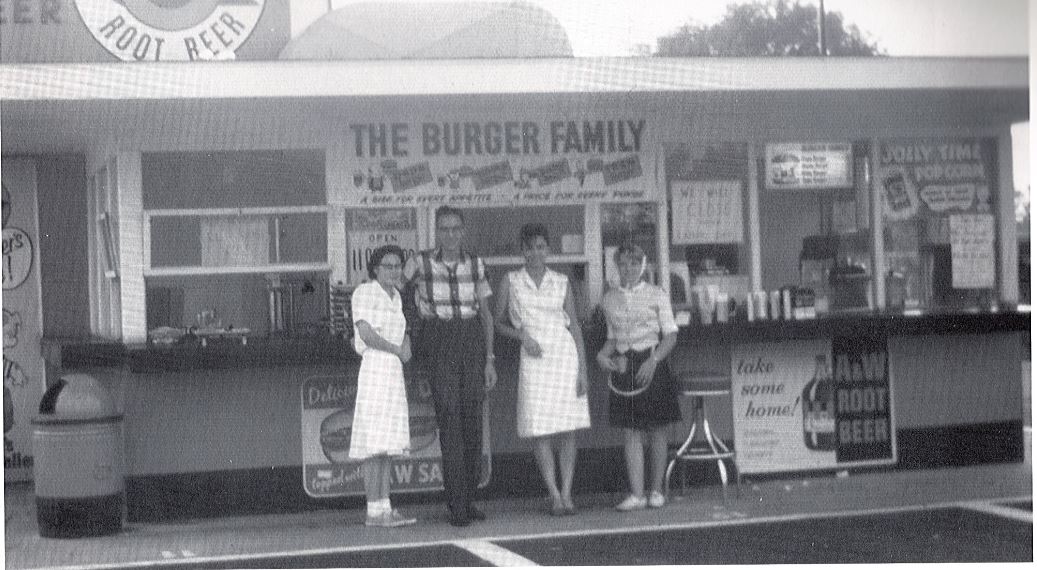 Louise and Dale Roenneburg, their daughter Lureen, and employee Mary Rundle pose in front of the Brodhead A&W in 1966.  Dale and Louise began operating the restaurant in 1966,  purchased it in 1967, and retired 15 years later.  Dale said about 120 young women worked as servers, or "carhops," for the business while he owned it. 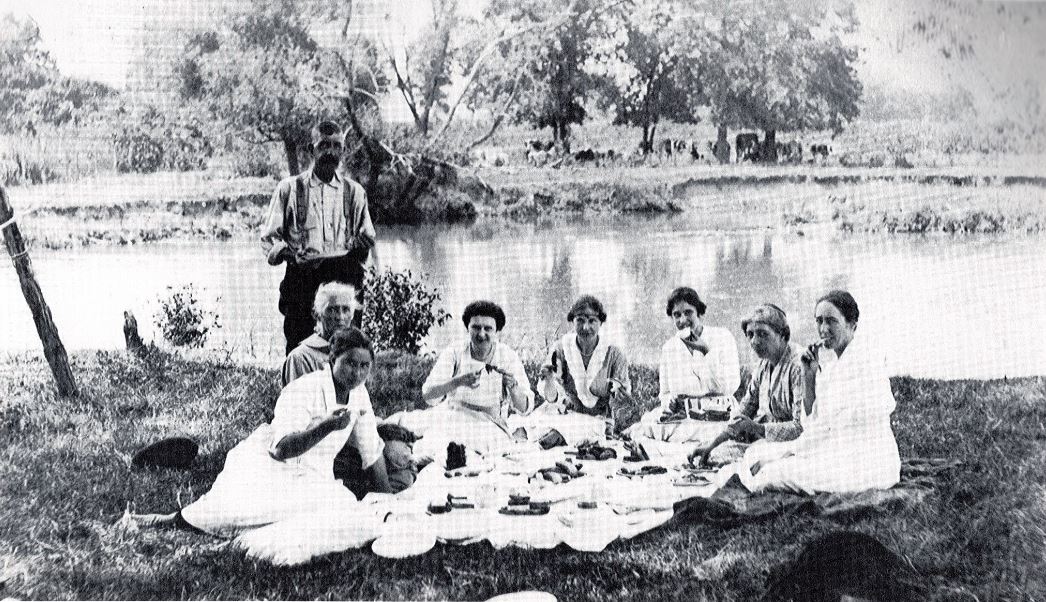 About 1920, this Belleville group enjoys a picnic by the Paoli Dam.  Standing is John Eith, with his wife, Catherine, seated in front of him.  In front of Catherine is Fannie Sweiger.  Right from Mrs. Eith are Mamie Miligen, Florence Swiger, Helen Eith, Mary Halfin, and Martha Eith. 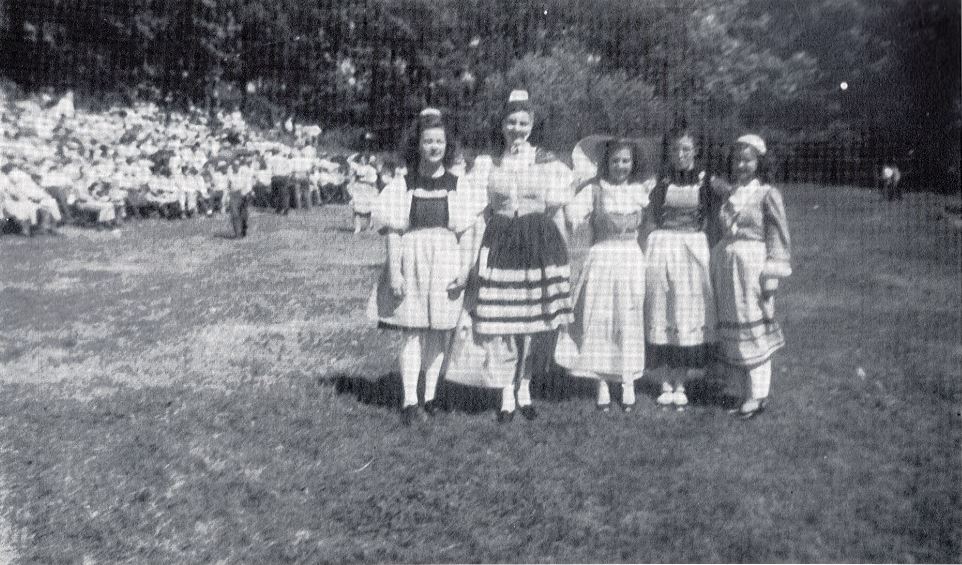 A young lady's role as an usherette seems to be a rite of passage when growing up in New Glarus.  This photo, taken about 1947, features (left to right):  Marie Zimmerli Guissberg, Betty Kneubuehl Vetterli, Phyllis Duerst Foster, Marian Zentner Streiff, and Jean Zweifel Retrum. 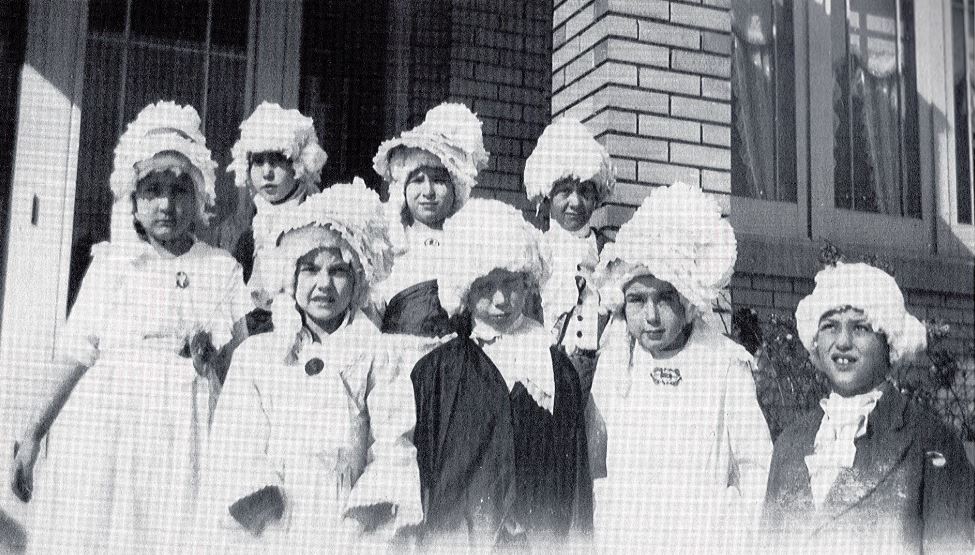 These elementary students pose in their fancy costumes sometime in the 1930s.  The special occasion was noted as "minuet" by Gerry Disch and the students were recalled as Gerald Disch, Harold Hoesly, Lois Thacker, Marion Schindler, Lila Kubly, Lucille Legler, Henrietta Opfermann, and Lorna Marty.  The location of the photo is the yellow brick home on 5th Avenue, across the street from the Old Schoolhouse. 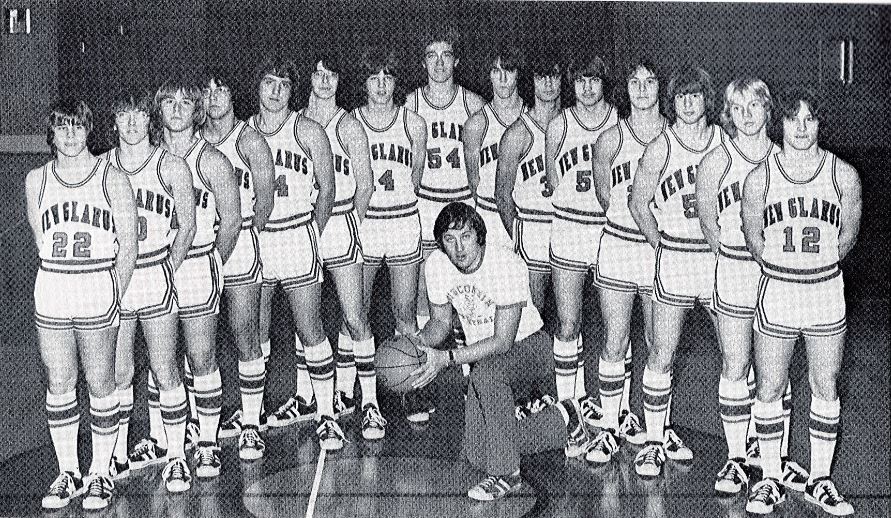 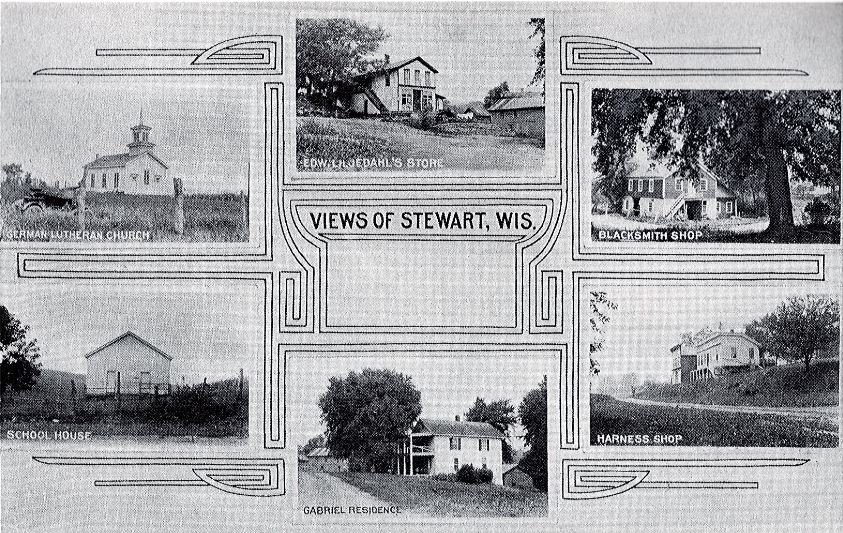 This postcard, entitled "Views of Stewart, Wis." was sent to local resident Mert Colney's grandmother, Matilda Hoesly.  It was sent to her by Herman Hoesly in 1916.  You may ask, "where's Stewart?"  Sometime after the production of this postcard, Stewart was renamed "Postville."  Why not take a country drive to Postville to see if any of these 1916 buildings still survive today?