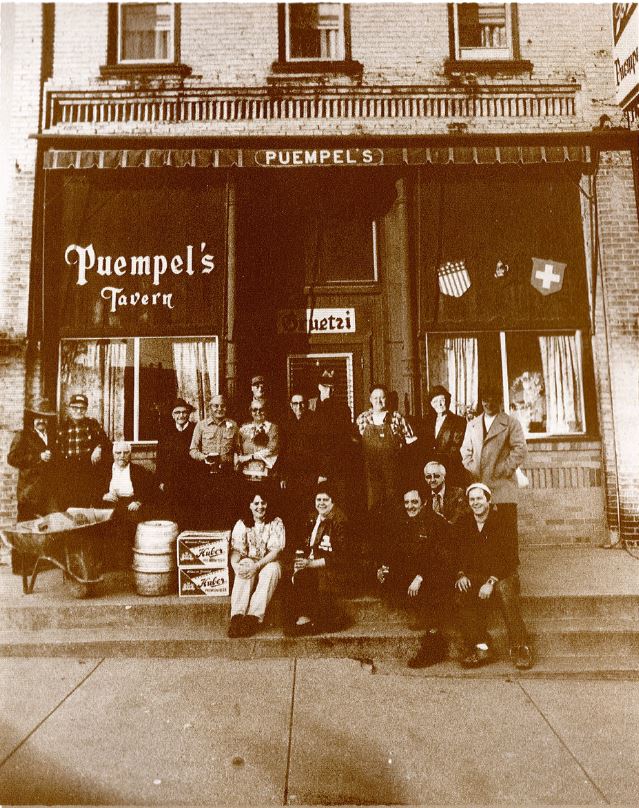 Puempel's Tavern, 1975.  Chuck Bigler (left, behind wheelbarrow) tells us that this picture was a spur-of-the-moment shot, based on an older photo on the tavern wall.  Chuck is the current owner of Puempel's.  Others in this motley crew were (left to right):  Fred Zuber, Toby Knobel, Josh Hoesly, Otto and Hazel Puempel (owners for 58 years), Clarence Itten, in back of Hazel is Palmer Knobel, Tim Ott, Les Bowers, Joe C. Hoesly, Fred Meyer.  Front row: Mary Bigler, Karen Fredrickson, Dave Hodgson, Harvey Ott, and Kent Anderson.  Otto died on Easter Sunday, March 31, 2002.  Hazel died in 1990.  After Otto sold the building in 1993, he could be seen almost every day strolling from his nearby apartment, checking things at Puempel's.  In the summer, you could see him hauling out the hand lawnmower from the basement, taking care of the flowers, mowing the lawn.  Otto was a fixture in the community, as is the tavern that bears his name. 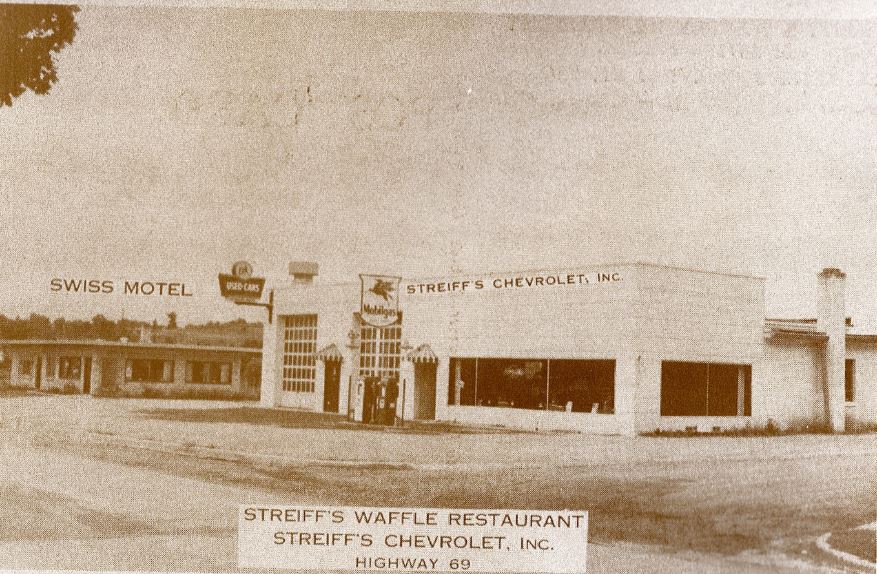 A big move.  In 1950, Fred Streiff moved his Chevrolet dealership from Fifth Avenue to a new building on South Second Street.  Alongside, he built a restaurant called Streiff's Waffle Restaurant.  This was then also State Highway 69, which ran through downtown.  Things change.  A few years later, in 1956, the state built a new Highway 69 to the east, and Second Street became a local road, but the dealership and the restaraunt survived.  Currently, New Glarus Motors, a Chrysler-Dodge dealership, occupies the spot.  The restaruant is now the Town Edge. 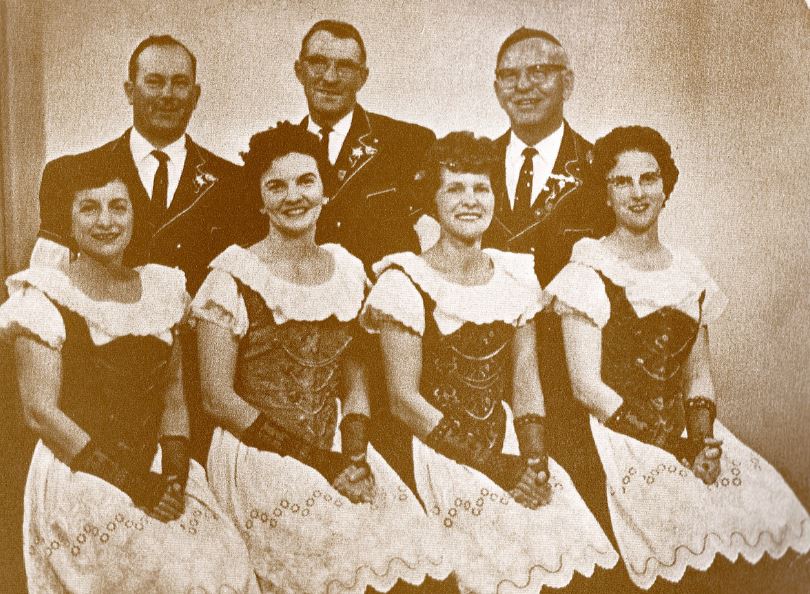 Edelweiss Stars.  In New Glarus, it's not unusual to see people in Swiss costume or hear Swiss music wafting from the homes, restaurants, and stores at any time.  Over the years, New Glarus has fostered many fine entertainment groups.  One prominent group was the Edelweiss Stars, a singing and yodeling group formed in 1950, which entertained thousands of audiences all over the country.  Shown here are (back row): Clayton Streiff, Ernst Zentner, Paul Grossenbacher.  Front row: Margaret Wild, Kathleen Elmer, Dorothea Ingwell, and Marian (Mert) Streiff. 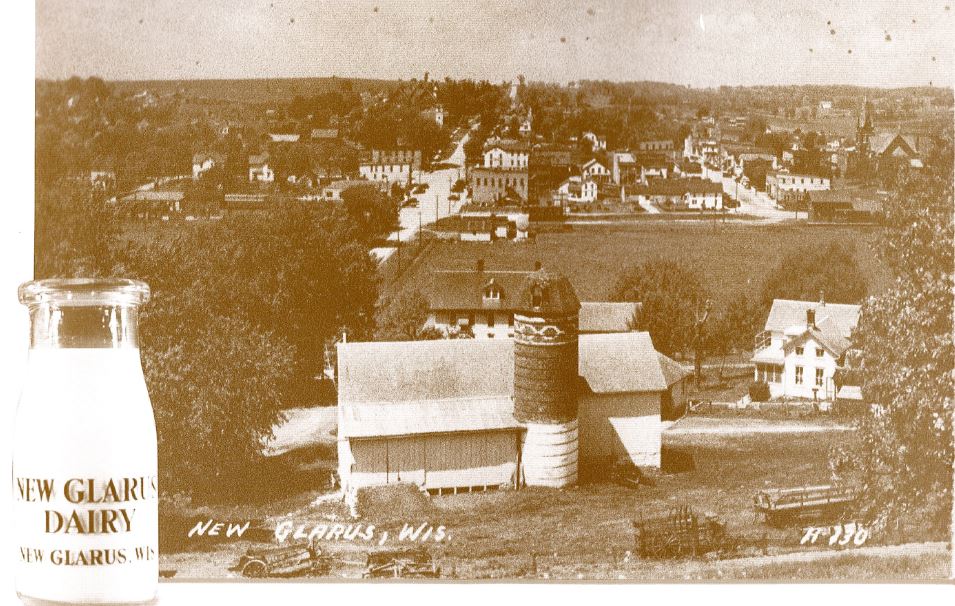 The Grossenbacher farm and New Glarus Dairy: Paul and Verena Grossenbacher bought this picturesque farm at the edge of New Glarus in 1945.  Paul operated New Glarus Dairy for many years.  When he retired, he engaged in a host of civic activities.  He was a yodeler, member of the Maennenrchor, the Edelweiss Stars Swiss singing group, and a longtime guide at the Swiss Historical Village.  They sold the farm to Tony and Esther Zgraggen in 1988.  Paul passed away in 1990.  The little farm is intact, at the intersection of Elmer and Kubly Roads.  Note that when this picture was taken, State Highway 69 had not been built.  It was an open field along the Little Sugar River. 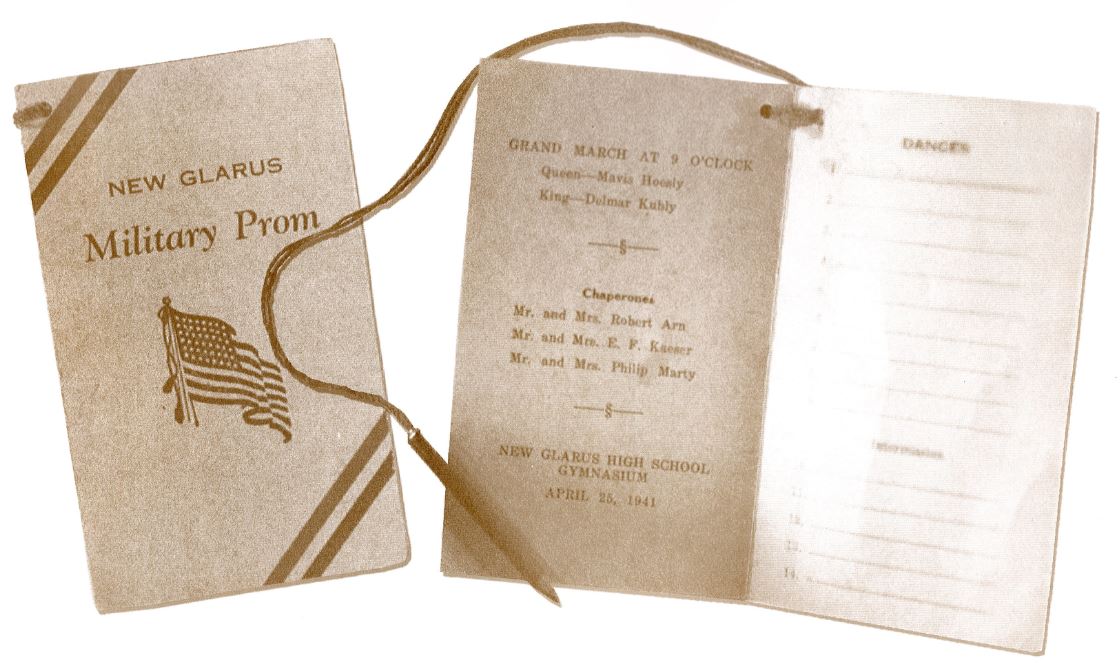 World War II was on in earnest and the New Glarus High School prom program from 1941 reflects this overwhelming fact. 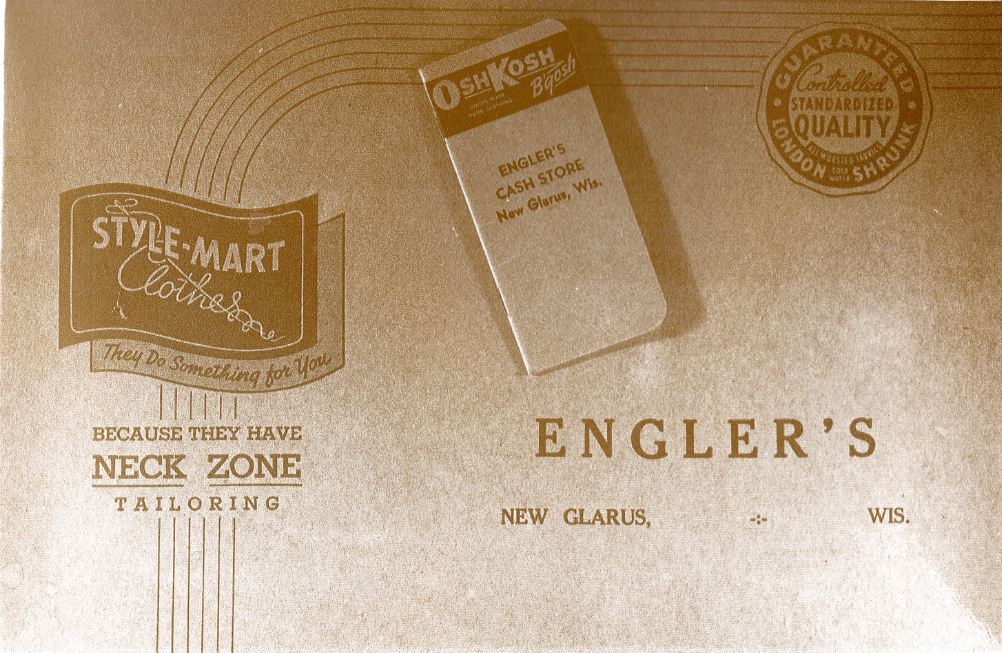 Engler's Cash Store or General Store was the Ben Franklin of its time.  Old timers tell us you could by  most anything at Engler's - food, live chickens, clothing, boots, whatever.  The large building stood on North Second Street.  The items reproduced here are an Engler's shirt box and notebook. 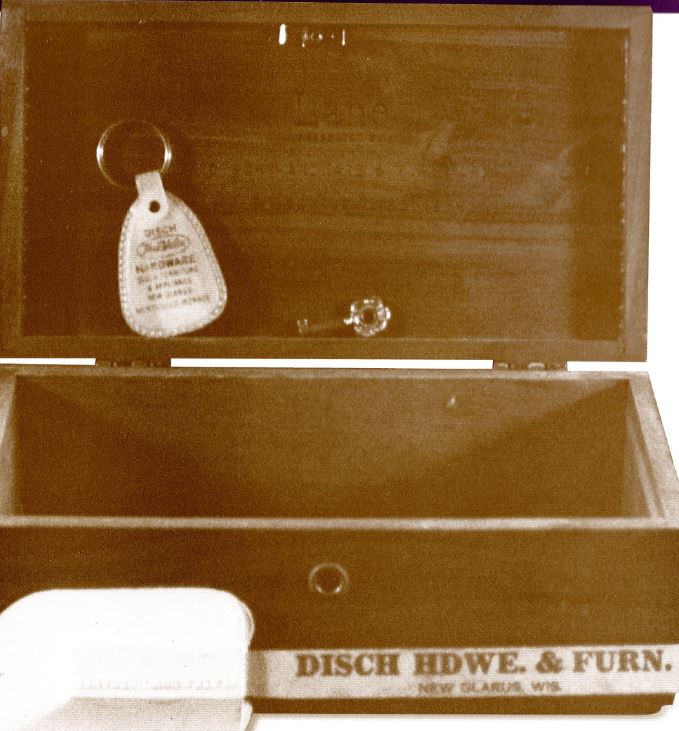 Disch Hardware: at one time, there were five hardware stores in New Glarus.  In the 1940s and 50s, the number dwindled to one.  Disch Hardware had two stores across the street from each other, a separate furniture and appliance retail store, and a plumbing/electrical service department.  Among the advertising items reproduced here are a cedar chest, key chain, and rubber spatula. 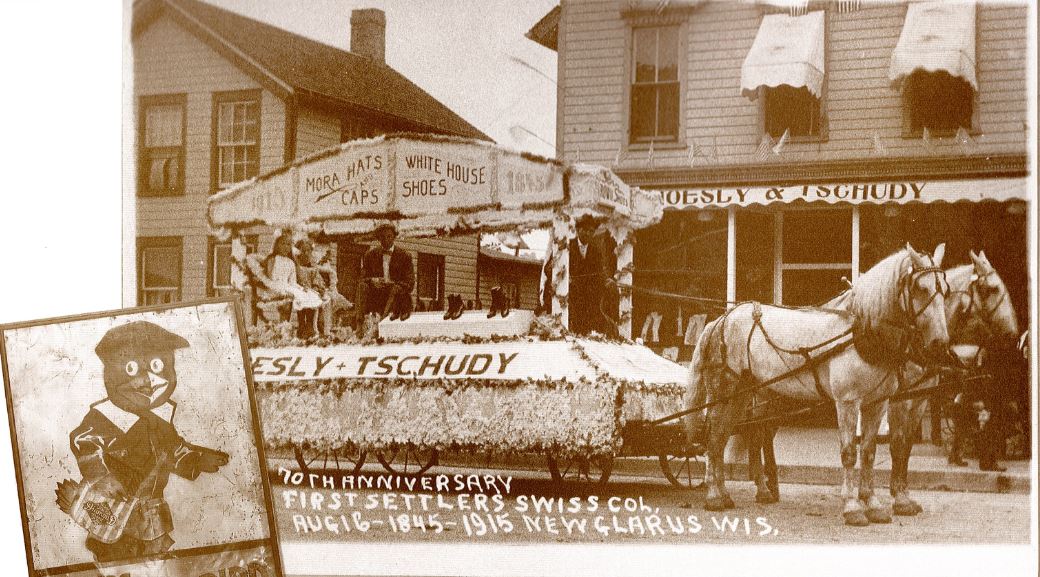 Swiss Parades: The first Swiss settlers founded New Glarus in the summer of 1845, and every decade thereafter parades and other festivities were held commemorating the founding.  Businesses and other organizations were represented in this 70th anniversary parade on August 16, 1915.  This photo was taken, appropriately so, in front of Hoesly & Tschudy's Shoe Store.  An original sign is reproduced at left.  The building, at 412 Second Street, is still there.

These are not from our current New Glarus Brewing Co.  A reproduction of this pennant and banner were from an earlier age.  As far as we can tell, a brewing company flourished in New Glarus as early as the 1890s.  Millard Tschudy's book, Mirror of Switzerland, reported that when the last decade opened, the village consisted of "one hundred fifty dwellings, plus barns and outbuildings, one brewery, one cheese factory, a stock yard, stores, shops, hotels, saloons, six hundred residents, one physician, one preacher, three school teachers, plus artisans, merchants, laborers." 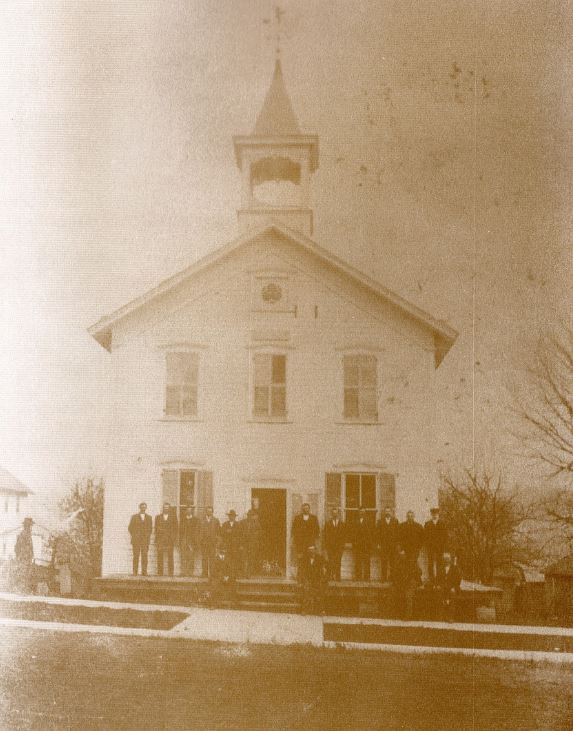 New Glarus Town Hall: Built in 1886, the town of New Glarus built this meeting hall in the Village of New Glarus on North Second Street.  Originally, it was designed for the town's monthly and annual meetings and elections.  During its life, however, the town hall has been used for many purposes, including the Boy Scouts, 4H, GUGG, Tell Guild, Yodel Clubs, and even a Haunted House for Halloween. 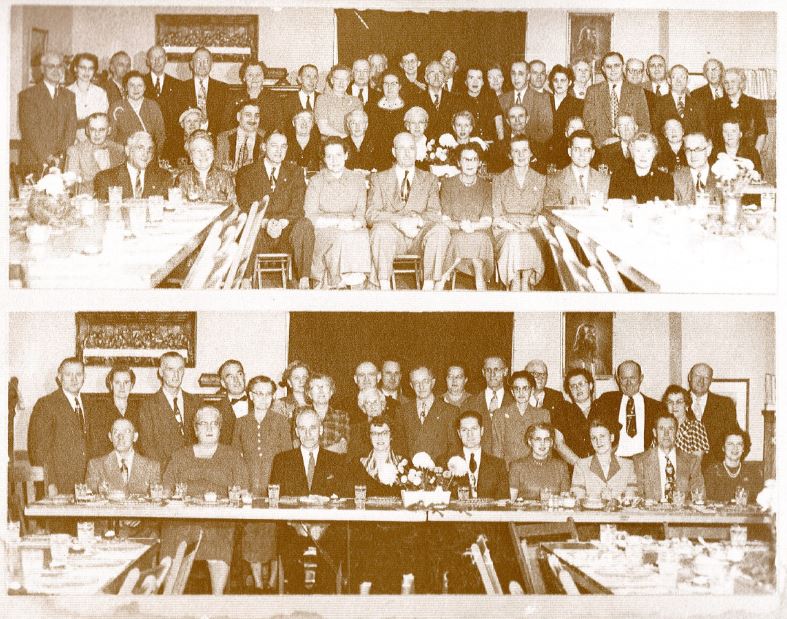 Pet Milk Banquet, December 1956.  This large group enjoyed their annual banquet in the basement of Zwingli House at Swiss Church.  There were several Pet Milk plants in a seven county area.  Pet Milk was a major employer in New Glarus, with a manufacturing facility that made tin cans and a facility that filled the cans with canned "evaporated" milk.  At its peak, the average volume of milk from Pet's seven milk trucks totaled a half million pounds daily.  After WWII, canned milk sales declined sharply.  1962 was a disaster to the New Glarus economy.  Pet Milk closed its plants in February, laying off scores of workers.