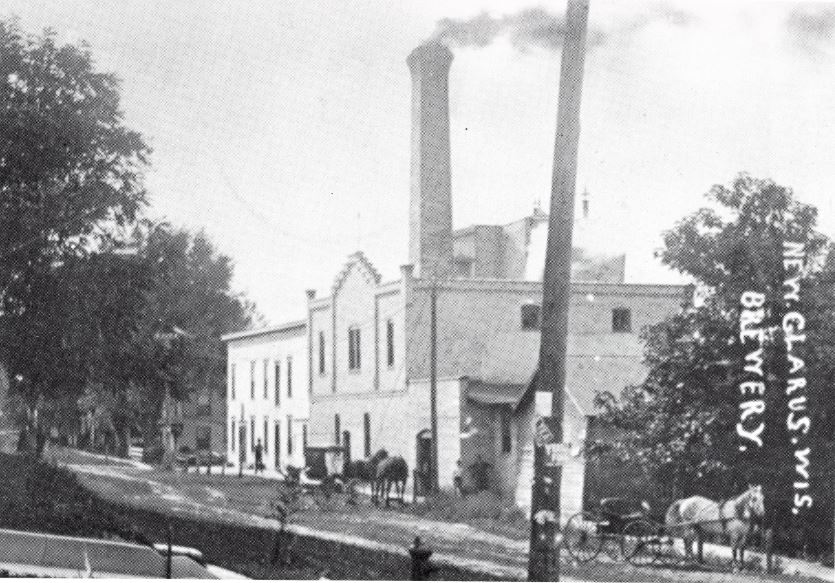 New Glarus Brewery in the horse-and-buggy days.  The brewery building near the corner of Fifth Avenue and Second Street has experienced many transformations.  This building has provided almost a century of use to the community.  A new brewery - The New Glarus Brewing Company - was established in the village in 1993 at a different site. 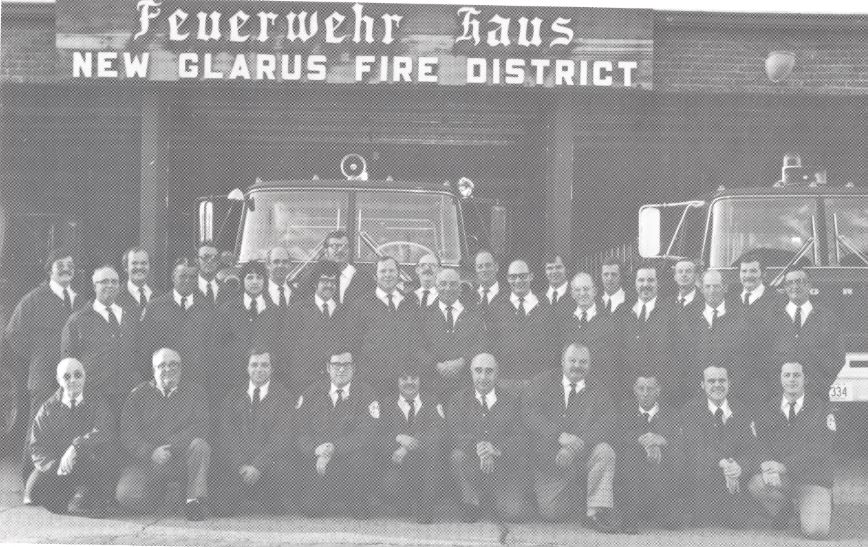 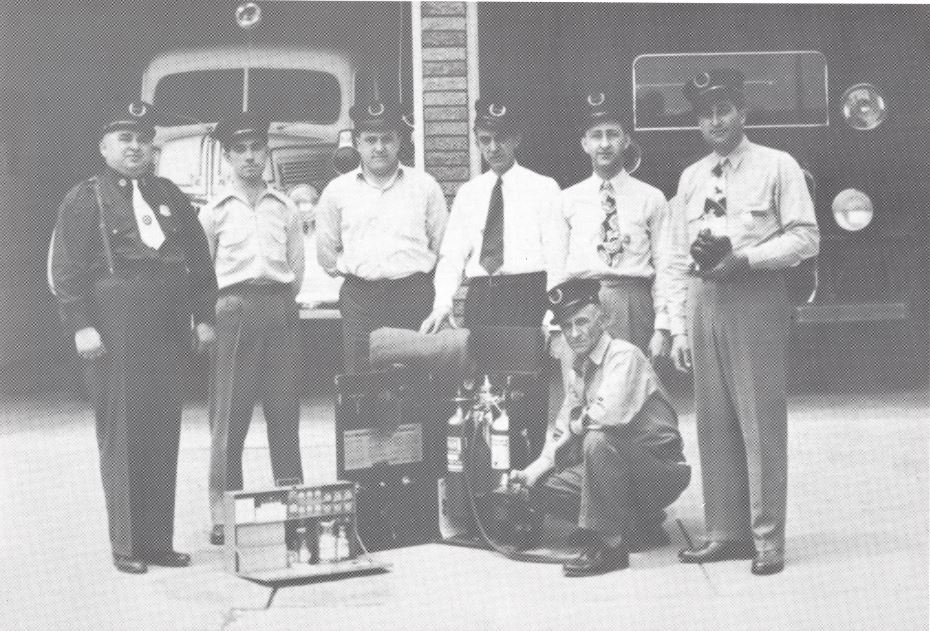 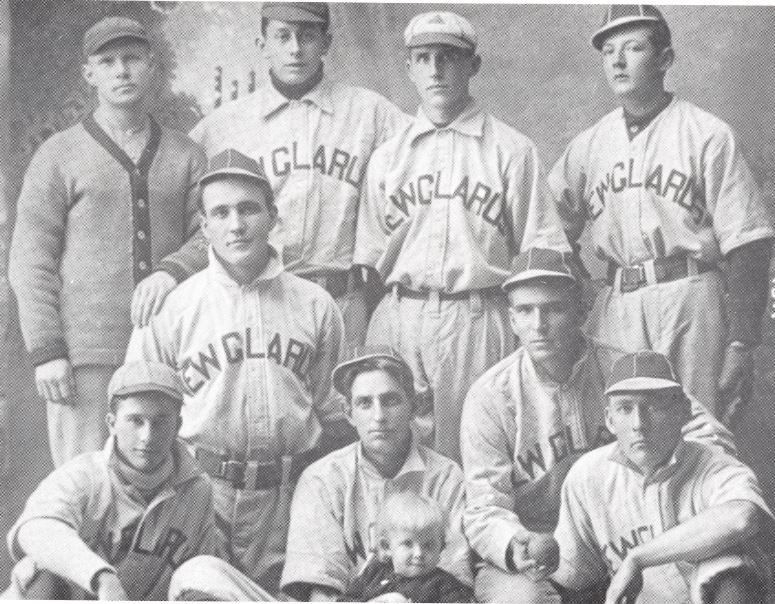 New Glarus 1911 Baseball Team: The names of this fine group of baseball players are lost to us.  We would love to get the names of these players to add to our history.  Anyone who recognizes any of them is asked to contact the library. 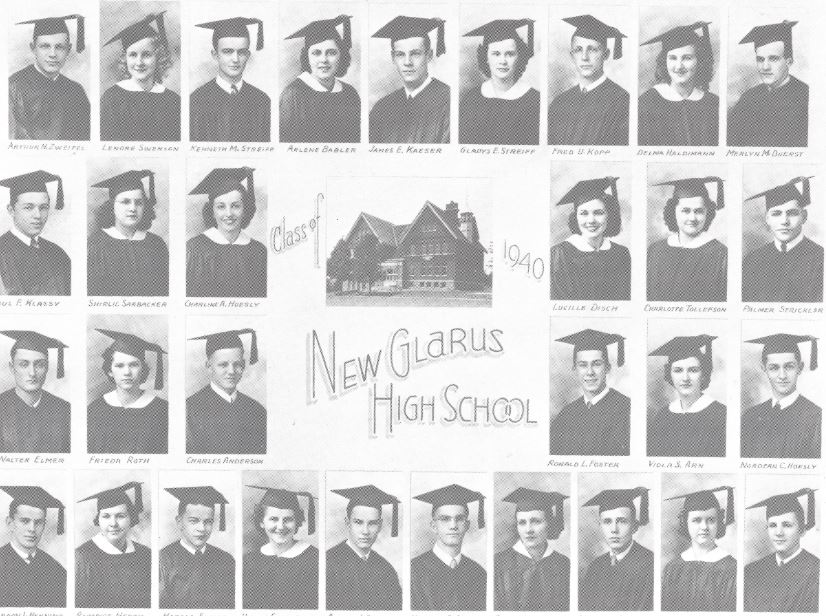 Class of 1940 graduated from New Glarus High School, which is now the Schoolhouse Apartments. 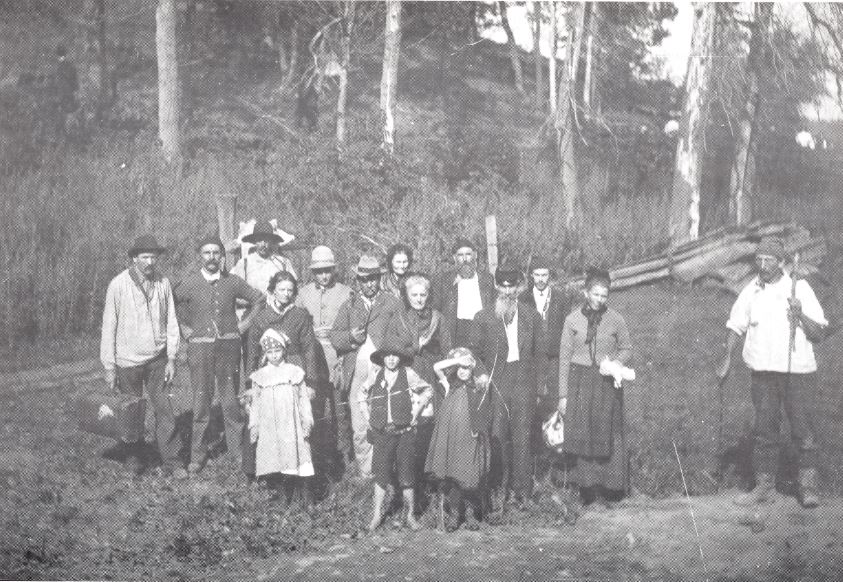 1906 - This precious old photo captures a group celebrating the 60th anniversary of New Glarus at the New Glarus Shooting Park.  We are told that the man with the luggage on the left is Herman Kubly.  Others in the photo include Mr. and Mrs. Joachin Duerst and daughter Margaret Duerst Wendli; Joe Steiner; Mr. and Mrs. Frick Kundert (Cora); Mr. and Mrs. Julius Elmer; Tony and Anna Yaeger; Mrs. Katherina and Antone Yaeger Sr.; and several people who aren't identified. 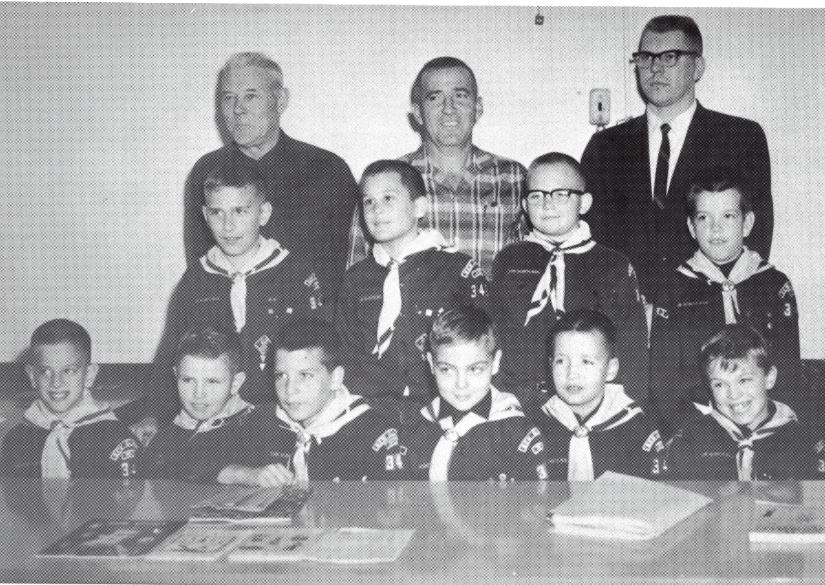 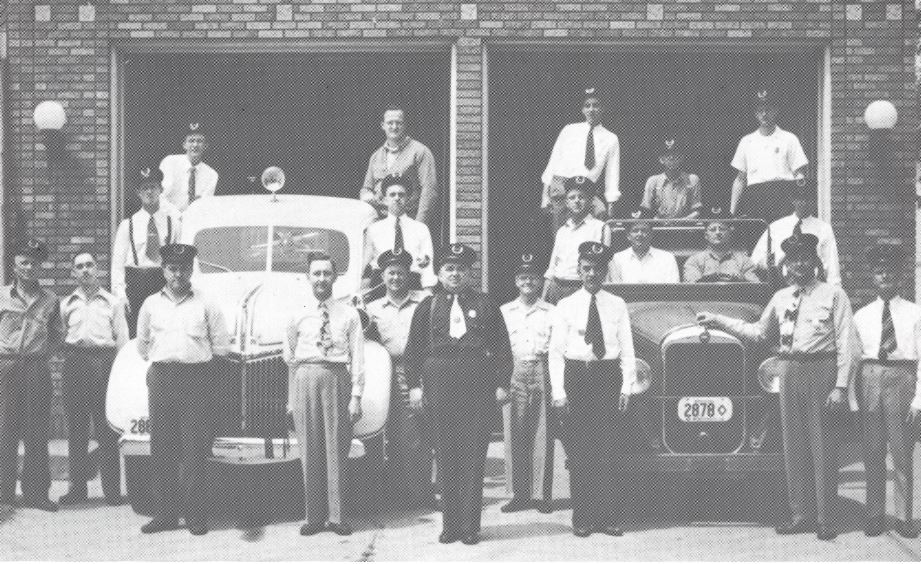 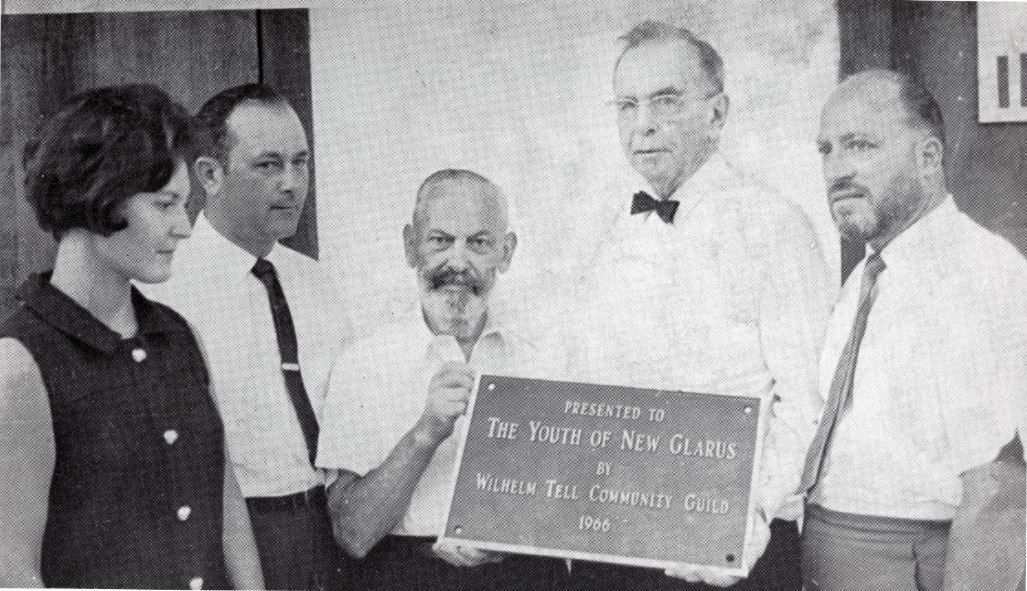 A gift to the community:  The Wilhelm Tell Community Guild has contributed much to the community and youth of New Glarus.  In 1966, they gave a $1,500 gift for dressing rooms at the New Glarus swimming pool.  Shown here presenting a plaque on behalf of the Tell Guild (left to right):  Pauline Grossenbacher Riggs, Clayton Streiff, Ernst Thierstein, Henry Schmit, and Ed Willi. 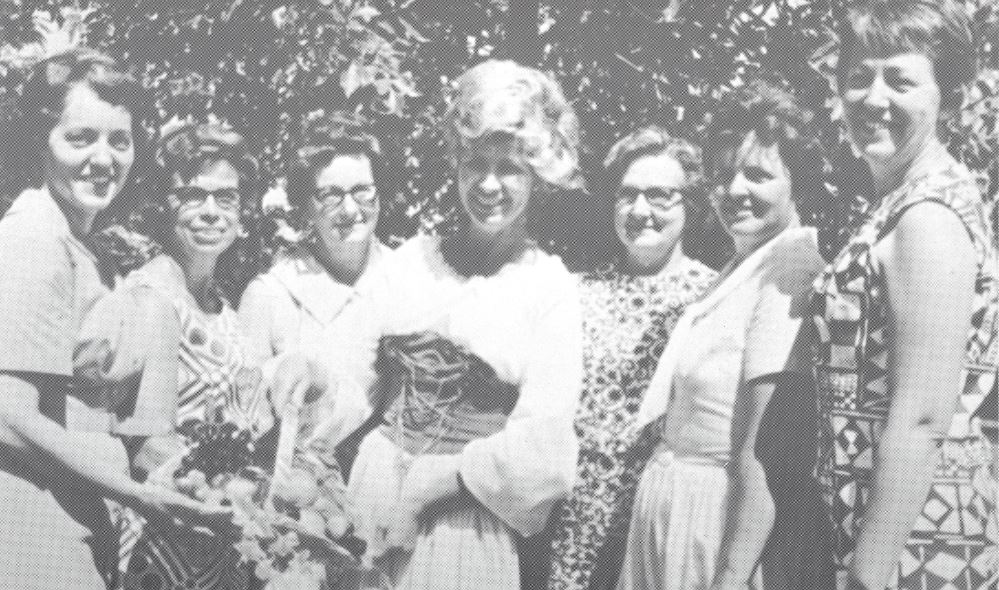 These dedicated women were responsible for dressing the cast as well as the care and preservation of the authentic costumes worn at the Wilhelm Tell Festival in 1964.  The wardrobe committee consisted of Donna Rupnow, Lois Wainwright, Agnes Rhyner, Shirley Disch, Ione Abley, Donna Nevil, and Virginia Henning. 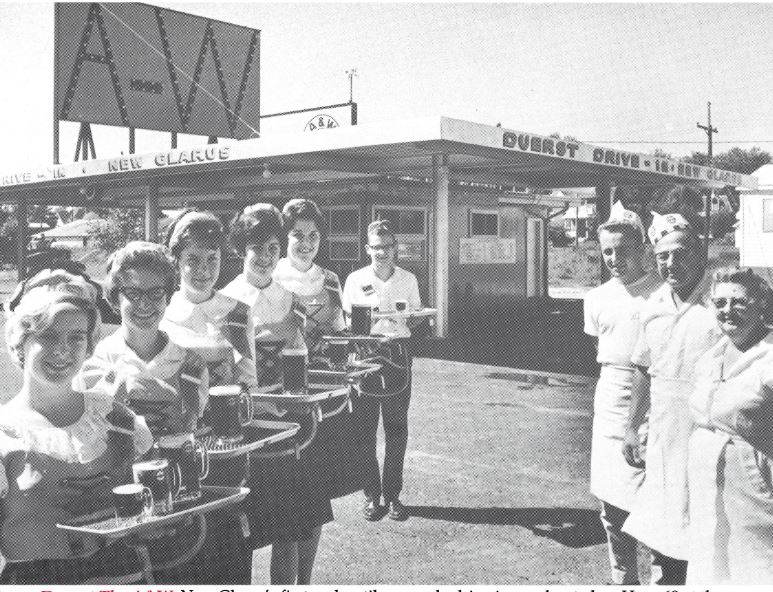 Happy Days at the A&W: New Glarus's first drive-in was located on Highway 69 at the current site of the Chalet Landhaus.  Pictured in 1964 was the snappy serving crew:  Sue Willi, Donna Yaun, Sandy Disch, Beth Marty, Judy Fahey of Belleville, and Steve Gmur.  The owners were Gilbert and Hilda Duerst (far right), with Gary Gmur alongside. 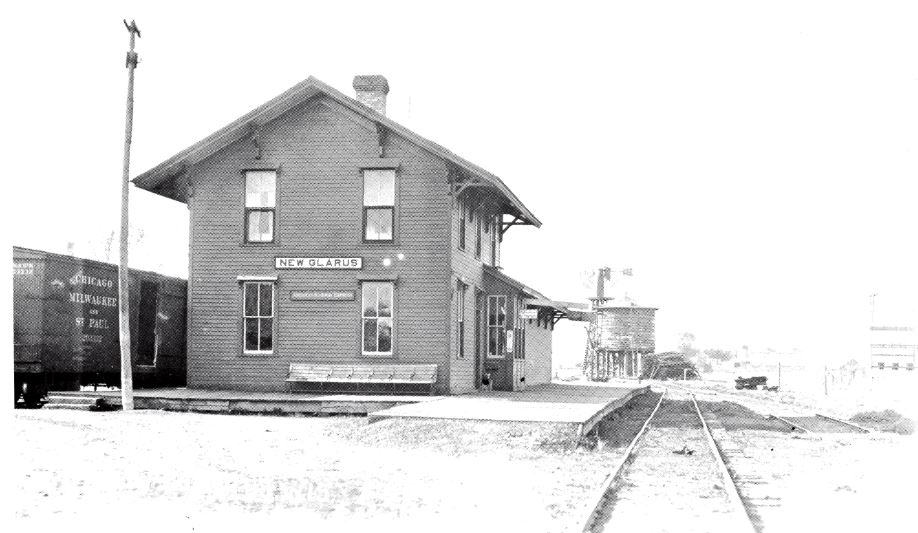 When this photo was taken (about 1929) railroads were in their heyday and the New Glarus branch of the Chicago, Milwaukee, and St. Paul Railroad was a busy place.  The train was called the Limburger Special and the boxcars were filled with cattle and other commodities.  When a major industry - New Glarus's Pet Milk plant - closed in 1962, this forced many locals out of jobs, and also caused the demise of rail service here.  After 85 years, the railroad abandoned service in 1972 and had a final run of three cars - two empty and one carload of lumber - was shipped to Tacoma, Washington.  But the depot has another life as the Sugar River Bike Trail headquarters, which was dedicated in September 1973.  The trail runs from New Glarus to Brodhead.