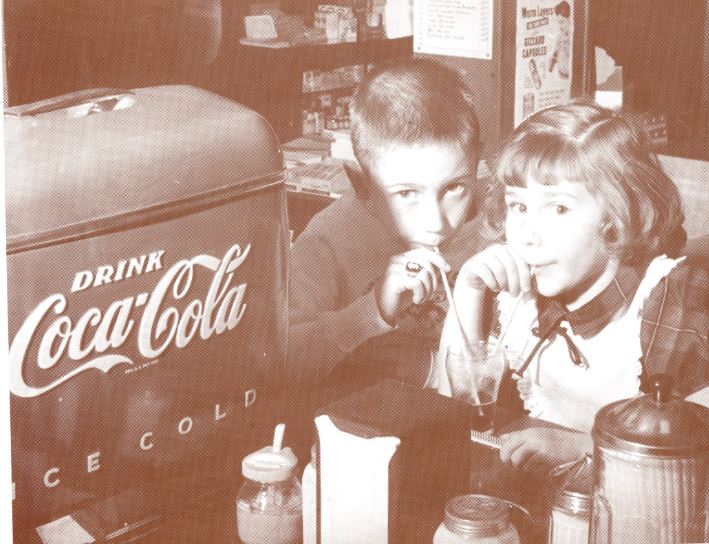 These cute little tykes were asked to pose for a Coca Cola magazine ad.  Jack and Jean Roberts are sitting at the Roberts Drug Store soda fountain around 1951-52.  Jack is a third generation pharmacist.  His grandfather, Arthur John, came from Chicago to open a pharmacy in Belleville.  His son, James H. Roberts, was also a pharmacist who attended the University of Wisconsin.  At one point, the senior Roberts sold the Belleville store and returned to Illinois.  But in 1946, Dr. Hicks of New Glarus contacted Arthur about starting a pharmacy in New Glarus, which he did.  Meanwhile, son Jim had completed college and joined Arthur in New Glarus.  Jack also attended UW Madison in pharmacy and joined his dad in the family business in 1971. 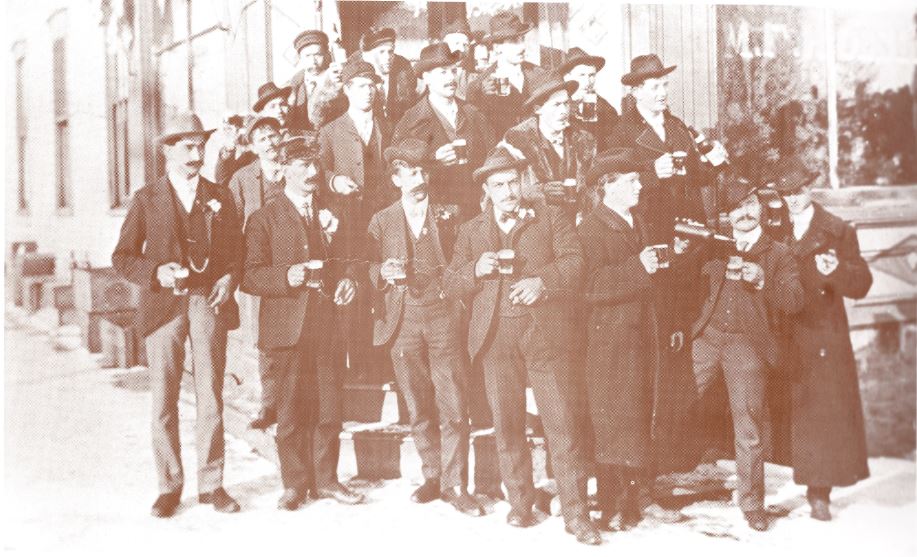 Cheers!  This dandy group of men in front of the M.F. Hoesly Saloon (now Toffler's) is toasting to some happy event.  We haven't been able to find out what the event was, and only some of the men in the front row are identified.  From left to right:  unknown, unknown, unknown, Jake Trachsel, father of Ethel (Albert) Elmer, unknown, Casper and Fred Heimann, cousins of Arnold Kehrli, from Monroe.  Notice the man in what looks like a train conductor's uniform, sporting a large boutonniere.  Mark F. Hoesly bought the saloon from Peter Zweifel in 1872 and converted it into a hotel. 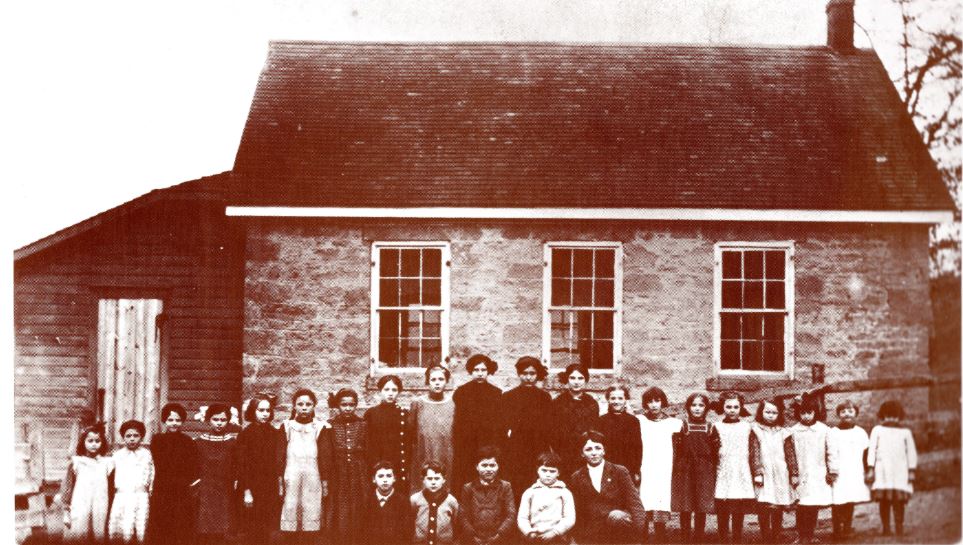 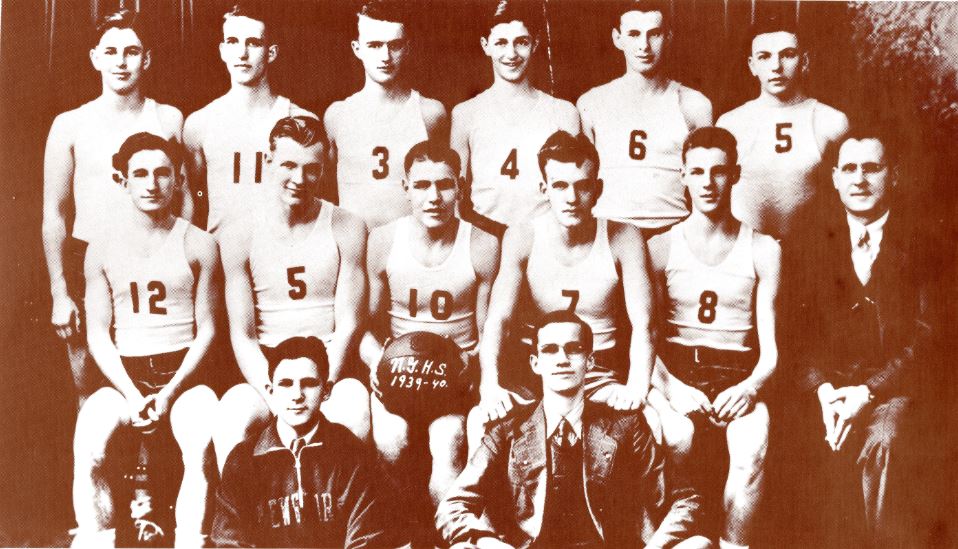 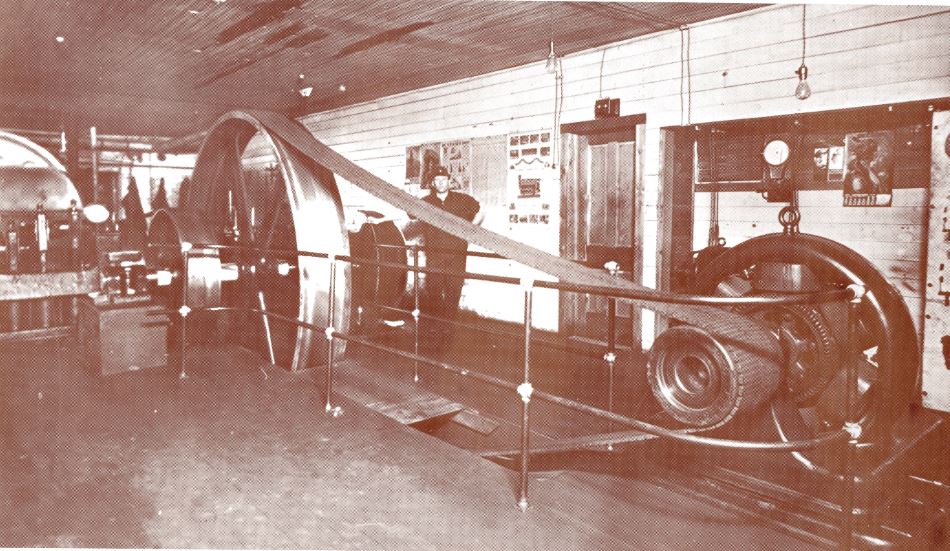 In the summer of 1902 the village purchased a coal-fired generator to run an electric plant.  On the left is the boiler and engine which generated steam to run the wheels that produce the electricity.  The engine was located in the back room of the present Light and Water Department.  1920 was the end of this method of producing electricity.  From that time on, electricity was available 24 hours a day.  Prior to this, the light plant quit generating at 11 PM unless a wedding dance was going on.  If the party needed lights, the wedding couple paid light employees extra money to keep operating. 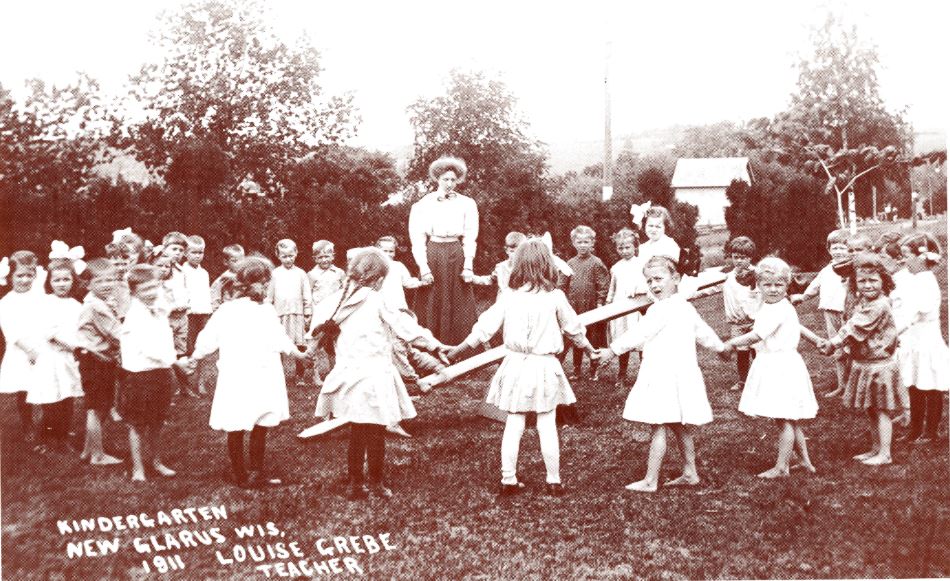 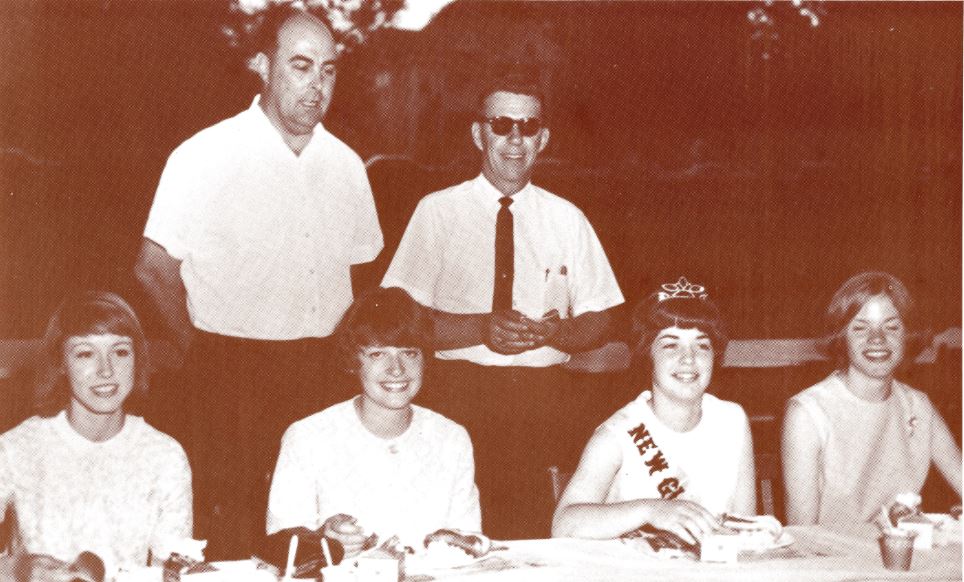 The crowning of the New Glarus Dairy Queen has always been an important event.  The 1965 Dairy Queen JoAnn Hoesly will be handing over her reigns to Bonnie Hustad.  Front (left to right):  Bonnie (Hustad) Whalen, daughter of Rollie and Betty Hustad; Beth (Luchsinger) Sandlin, daughter of Willis and Lennys Luchsinger; JoAnn (Hoesly) Aebly, daughter of Bob and Olga Hoesly; Trudy (Elmer) Pulver, daughter of Alvin and Mavis Elmer.  Back row:  Emcees of the event were Mert Colney and Marsh Ingwell. 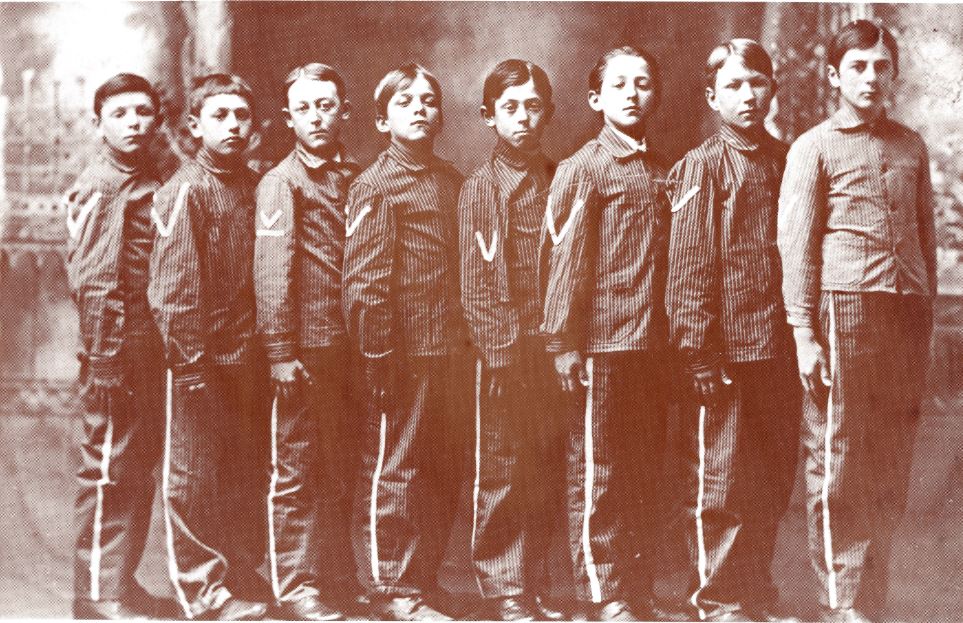 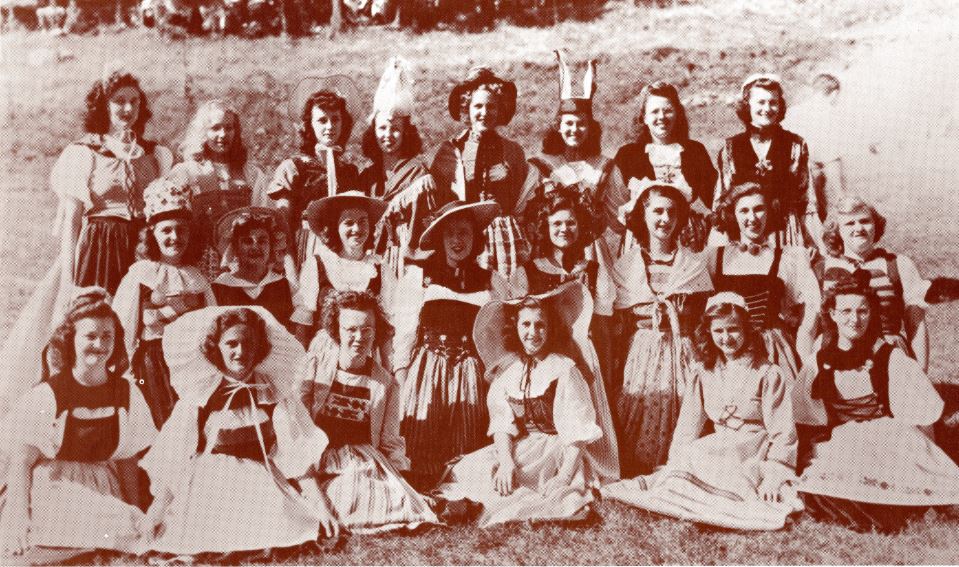 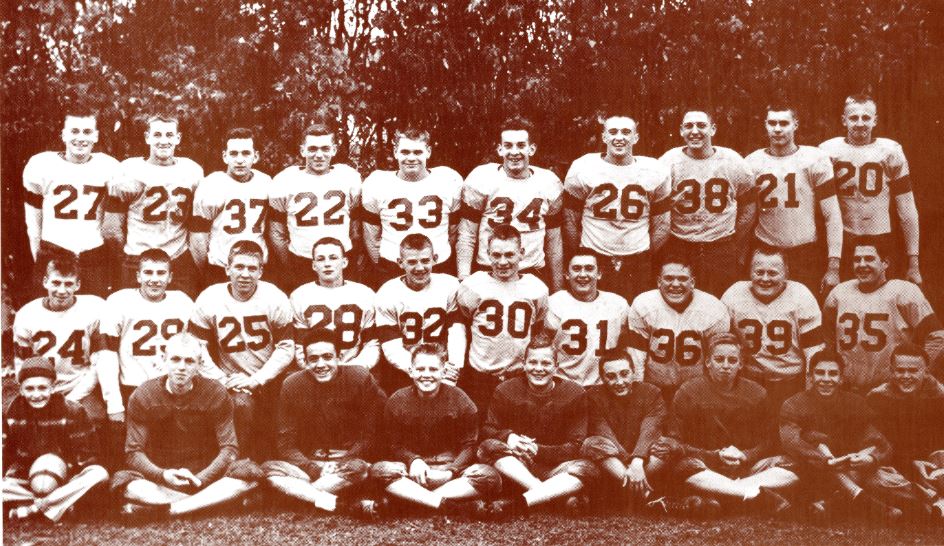 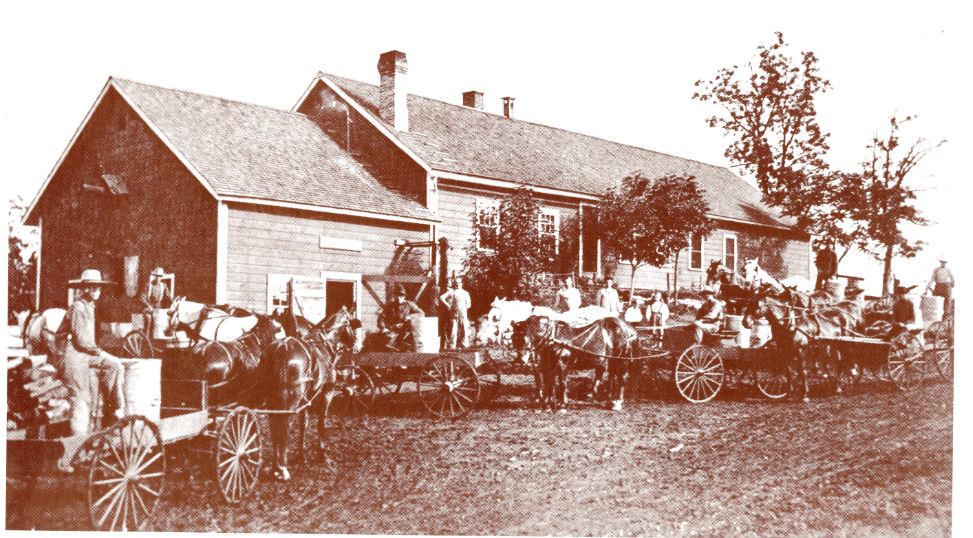 Six farmers with wagons are lined up waiting to leave their day's milk at the Apple Grove cheese factory at Postville.  Viola Truttmann's grandparents, Mr. and Mrs. Jacob Alder, are standing next to their children, Pauline (Viola's mother) and little Eddie Alder.  The Alders made cheese here for 17 years and this picture is believed to have been taken around 1905. 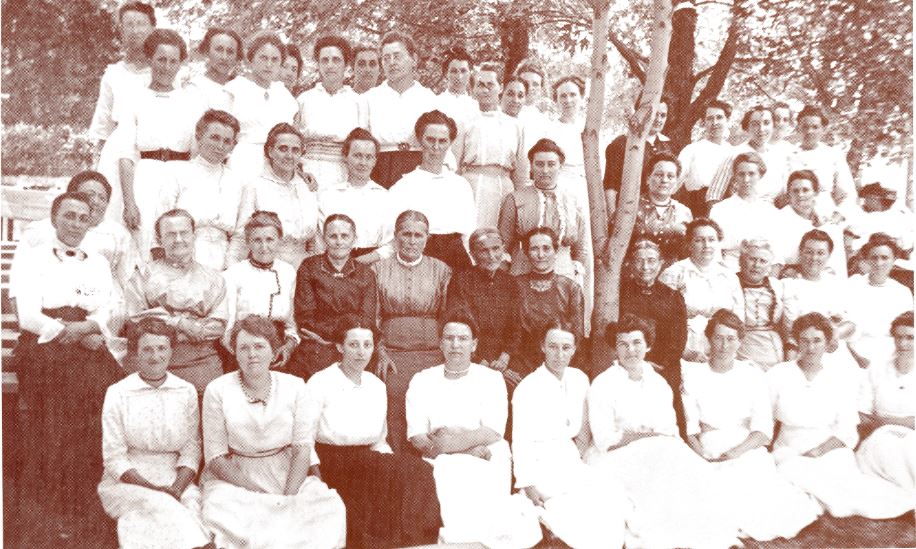 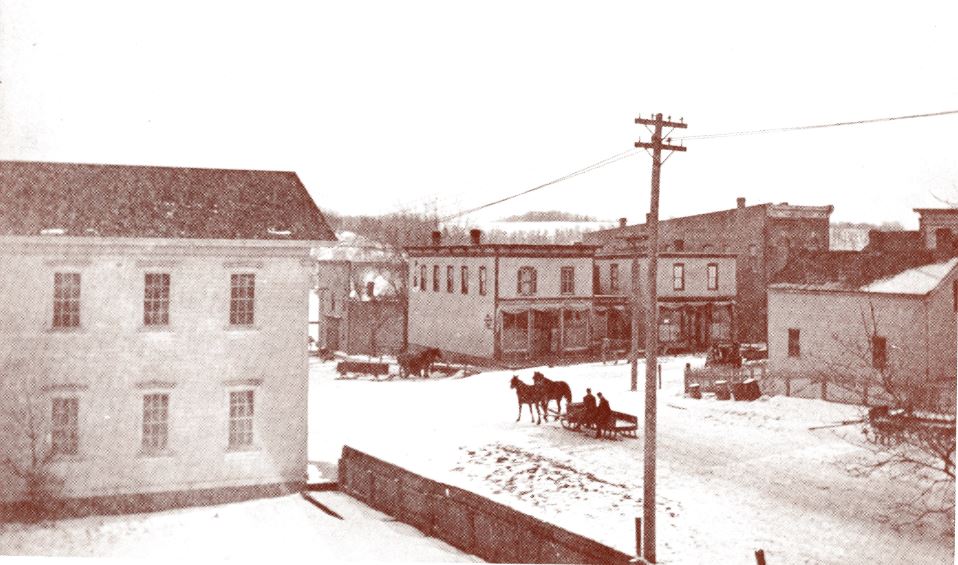 Listen closely and you'll hear the sleigh bells ringing.  The white two-story on the left was a school built in 1866 or 1868 at the cost of $1500 (now The Bramble Patch).  We know this picture was taken after 1901 because the Salomon-Stuessy building (now the Glarner Stube) was built before The Bank of New Glarus was built on the corner in 1910.  The school had already been abandoned for the new brick school on the hill in 1896.