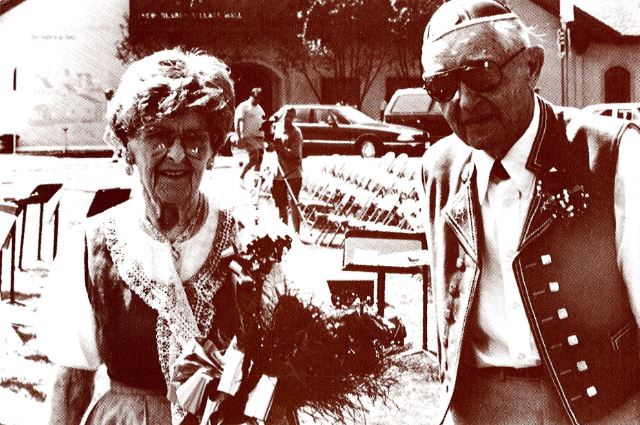 Herman and Lilly Burkhardt were chosen as the marshals for the Sesquicentennial parade held on August 13, 1995.  Herman and Lilly were the oldest living immigrants from the Canton of Appenzell, Switzerland.  The couple met while attending the same school in their native country.  Herman, born in 1904, came to the United States in 1923.  Lilly was born in 1902 and travelled on the ship Aquitania across the Atlantic in 1926.  Herman took a train from Monroe to New York to bring Lilly to his home in Belleville.  When he reached Janesville, he learned that her ship had been hit by a bad winter storm and would be 50 hours late into New York.  Herman had been told not to take too much money with him, as he might be robbed, so when he returned home he had just 5 cents in his pocket.

Herman was a cheese maker, and after several years in Belleville they moved to Minnesota, where Herman made cheese for 10 years, then returned to Wisconsin near Fond du Lac.  After WWII, Herman and Lilly came to New Glarus where they have resided since 1949 in the house Herman built.  New Glarus has been fortunate to have the Burkhardts.  Herman joined the Maennerchor and both he and Lilly put on plays for entertainment.  They were involved in the Wilhelm Tell Guild for over 25 years and both became history buffs and worked for the New Glarus Historical Society. 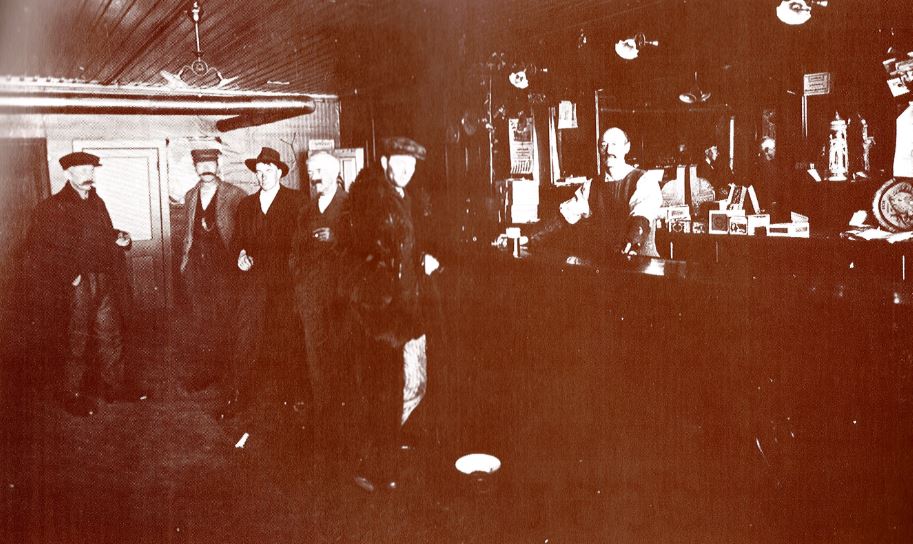 Kehrli's Saloon in 1925 or 26.  Arnold Kehrli Sr. (behind bar) operated Kehrli's Saloon from 1911 to 1946 when he sold it to his son Arnold Jr.  Somewhere along the way, the name was updated to "tavern."  The building at 526 First Street has had an interesting past.  It started out as a general store on the opposite side of the street.  About 1906, the building was moved across the street and the back of the building became the front.  (Left to right): Unknown, John Kehrli, John Leuenger, Jake Mani, and Sam Mani. 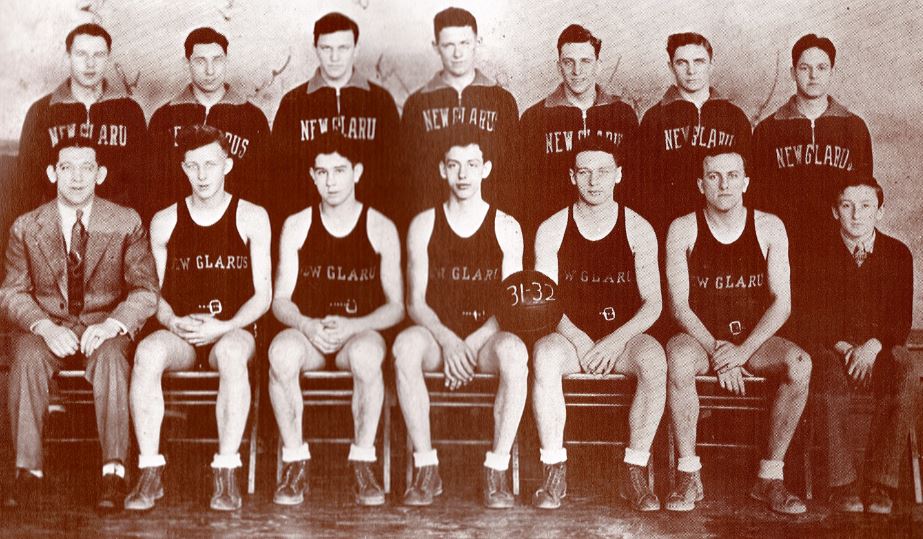 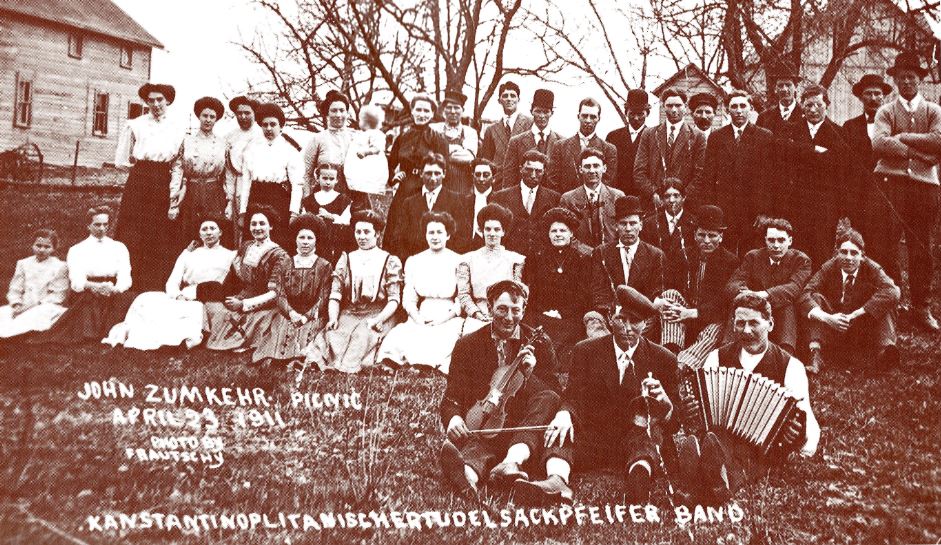 Kanstantinoplitanischertudelsackpfeifer Band!  (Don't ask us how to pronounce it.)  The back of this photo, dated April 23, 1911, simply read "a whoopie party."  This fun group got together on the Ed Zumkehr farm on Exeter Crossing Road.  The three musicians are (left to right):  Henry Baker, Arnold (?) Zumkehr, and Oscar (?) Gross. 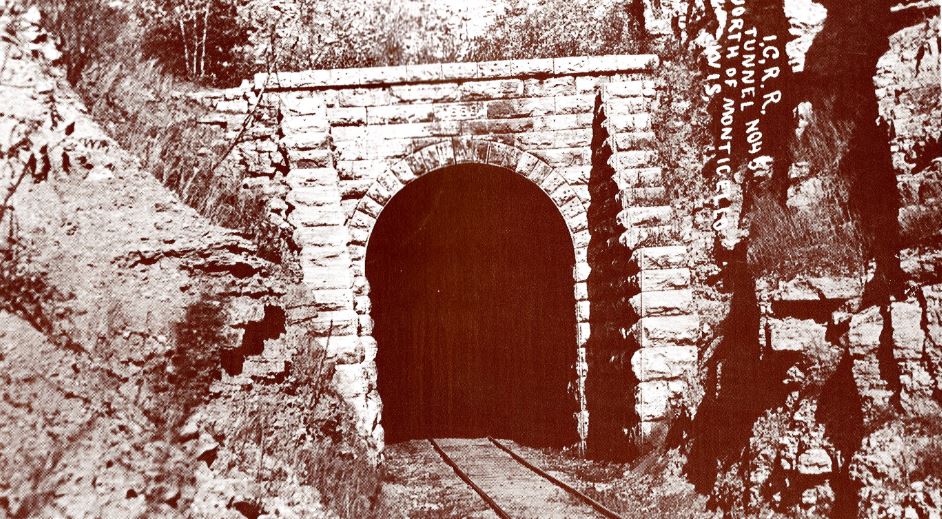 Railroad Tunnel in Exeter Township.  Started in 1887 and completed the following year, this railroad tunnel about five miles east of New Glarus was probably the largest construction project ever undertaken in Green County.  The tunnel is 930 feet long and over 100 feet underground at its deepest point.  It was built by the Chicago, Madison, and Northern Railroad (later the Illinois Central) for a rail line from Freeport to Madison. 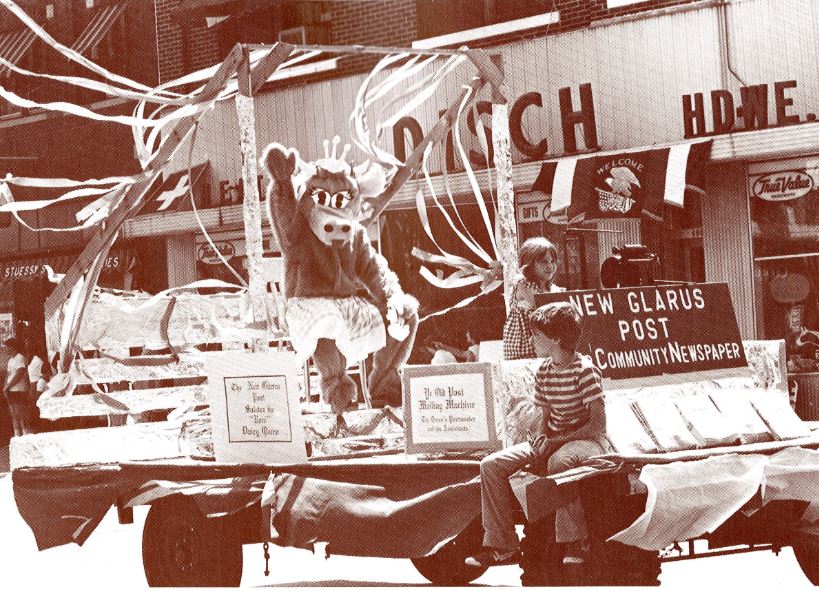 Dairy Days in New Glarus, 1979.  Bill Capellero looks very fetching in the cow costume as the New Glarus Post's entry in the annual countywide dairy month parade.  Bill and his wife Helen published the paper at that time.  Two of their children, Jennie and Mark, are on the float. 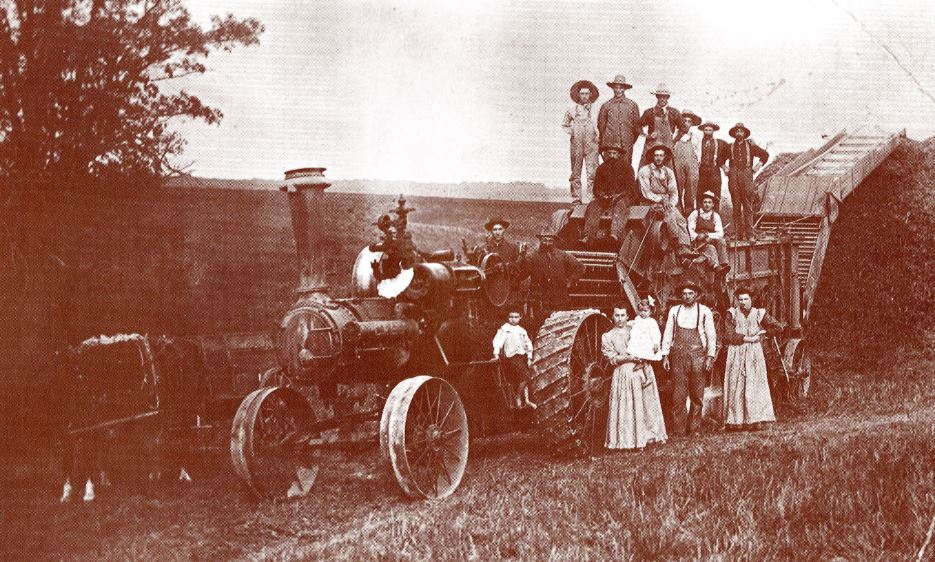 Threshing on the Dave and Berene (Zimmerman) Hustad Farm, 1907.  Farming wasn't easy, but family and neighbors like the Duerst brothers, Heftys, and Rhyners pitched in.  The Zimmerman family had 10 children of their own; one daughter, also named Berene, was Oliver Hustad's mother who married in 1913.  This steam engine was powered by wood or coal.  One man hauled or pumped water from the creek.  The binder cut the straw, shocked it into bundles, and pitched it into the threshing machine.  The grain would come out one end and the straw the other.  The farm is now the Donald Hustad property on County H. 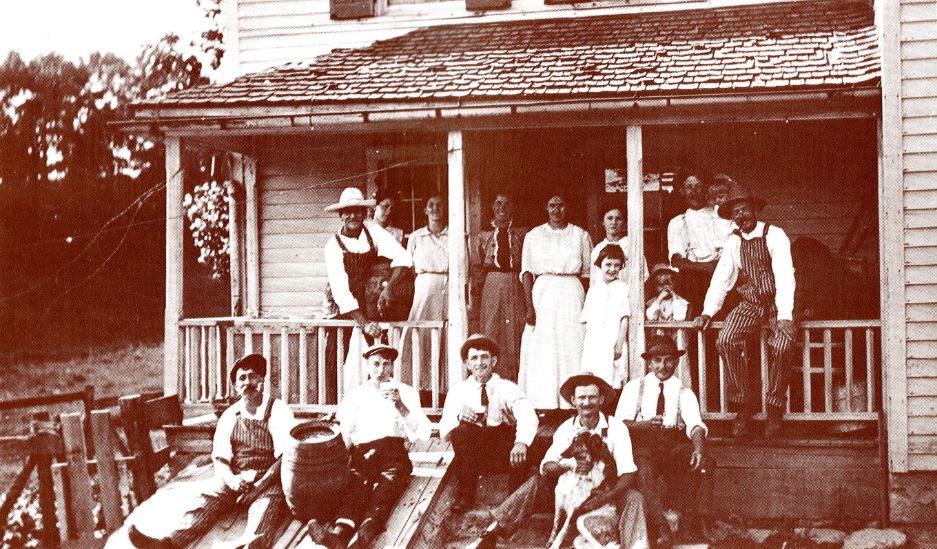 When summer turned sultry, the two kegs of homemade beer (or was it homemade something else?) were brought up from the springhouse.  Arnold Kehrli doesn't know where or when this picture was taken, but it was about 1920.  Some of the group in the front row are (left to right): Jake Isley, John Leuen, unknown, August Fiez, unknown.  In the back row John Kernen (second from right) is holding a child. 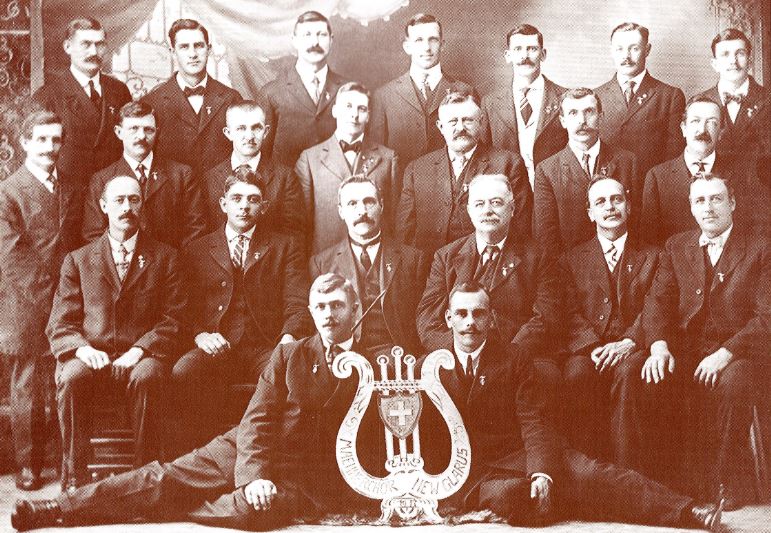 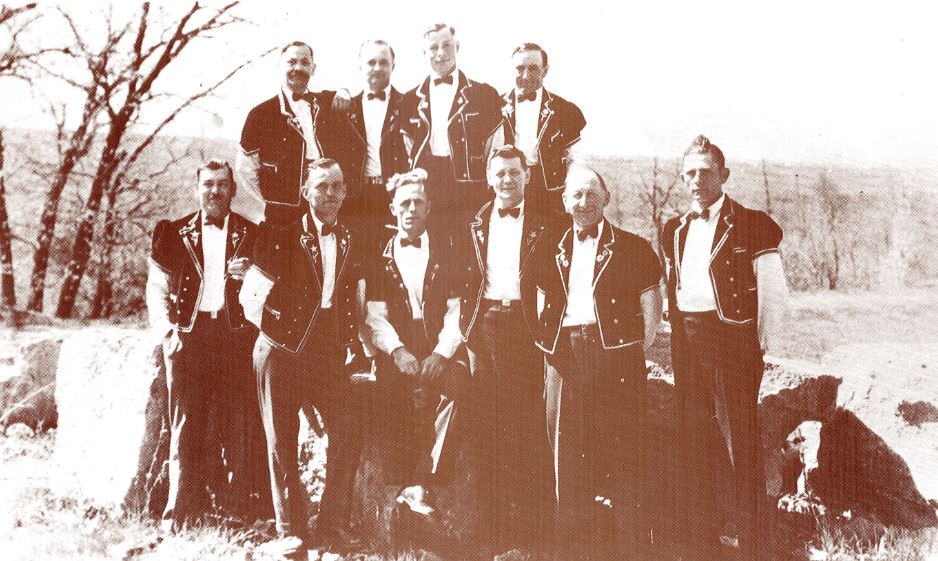 Up to the 1970s, the corner of Sixth Avenue (Highway 39) and First Street in New Glarus was Gasoline Alley.  Both this service station on the northeast corner and the one pictured below served motor vehicle customers, but also were hangout spots for teenagers.  This station was operated by a number of owners, among them Eldon Braur, Chester Stuessy, Ken Blum, Freddie Goecks and Heinz Minick, Chuck Bigler, and in its last years, Chuck and Brian Zweifel.  This picture shows it was a Shell station.  Later it became City Service, and then Citgo.  In 1981, the last gas was pumped and the building was converted into the Schoco-Laden, a specialty food and wine shop.

Louis Ubert's DX service station was another favorite hangout.  It was located on the corner of Highway 39 (Sixth Avenue) and First Street.  The station was under the ownership of the Mid-Continent Oil Co. when Louie moved here from Monticello in 1941 to run it.  Shortly after, he was drafted into the U.S. Army for 2 years, then returned in 1944 and continued to operate the station until an illness in 1968.  Louie died two years later.  They mostly pumped gas and sold and repaired tires on their new tire changing machine.  Palmer Duerst delivered gas with the DX truck.  Several local people operated the station before the building was purchased by Hans Lenzlinger and transformed into a chalet-like structure about 1981.