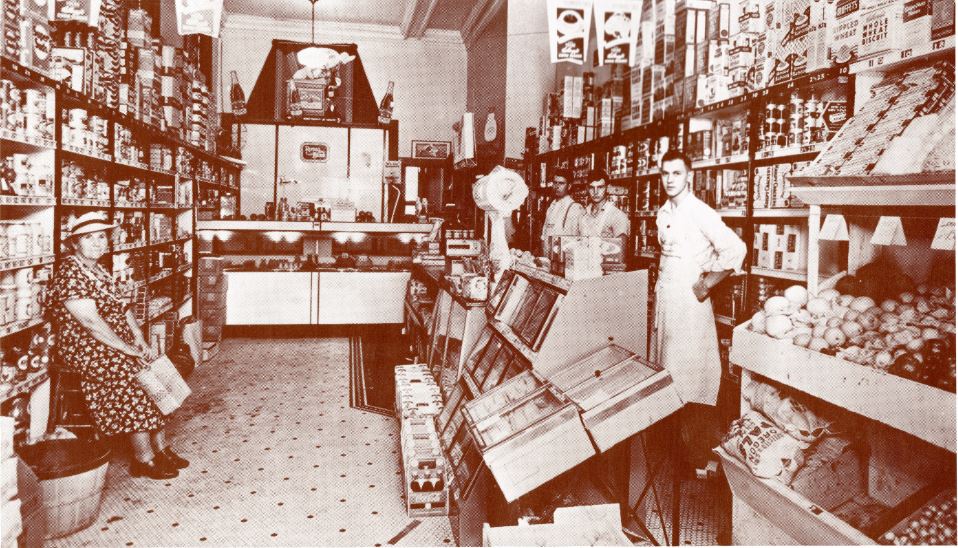 In 1937, "Grandma Heller" (left) could walk into Bergdorf's Royal Blue store, hand the store clerks her family grocery list, and visit while her shopping was done for her.  The clerks were (front to back) Don Regez, 17-year-old William Kuenzi, Sr., and Ted Schmidlin.  The store was located in the former Citizen's State Bank building at the corner of Second Street and Fifth Avenue.  Hoesly's Insurance Office was also in the building.  In 1960, the building housed Ziltner's Market, owned and operated by Werner and Darlene Ziltner. 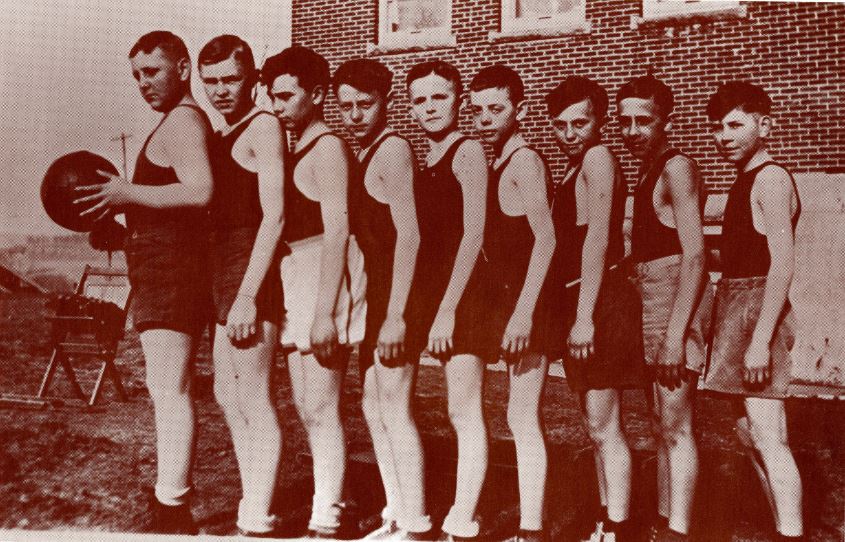 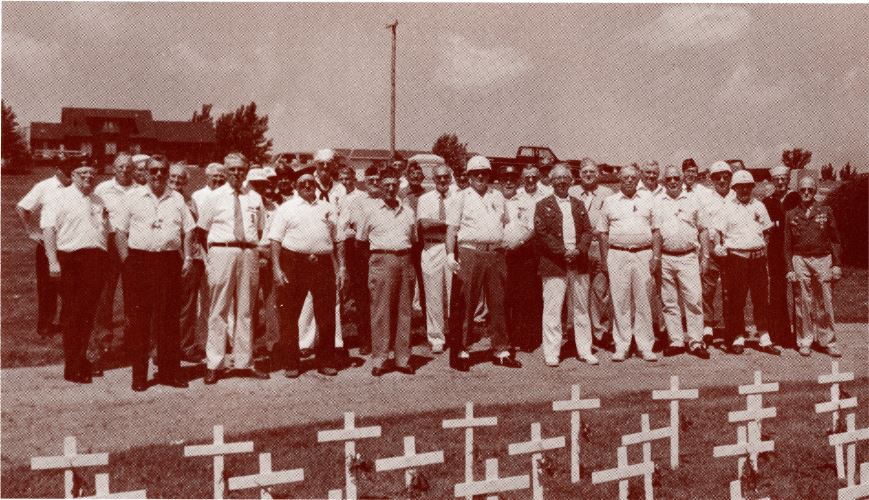 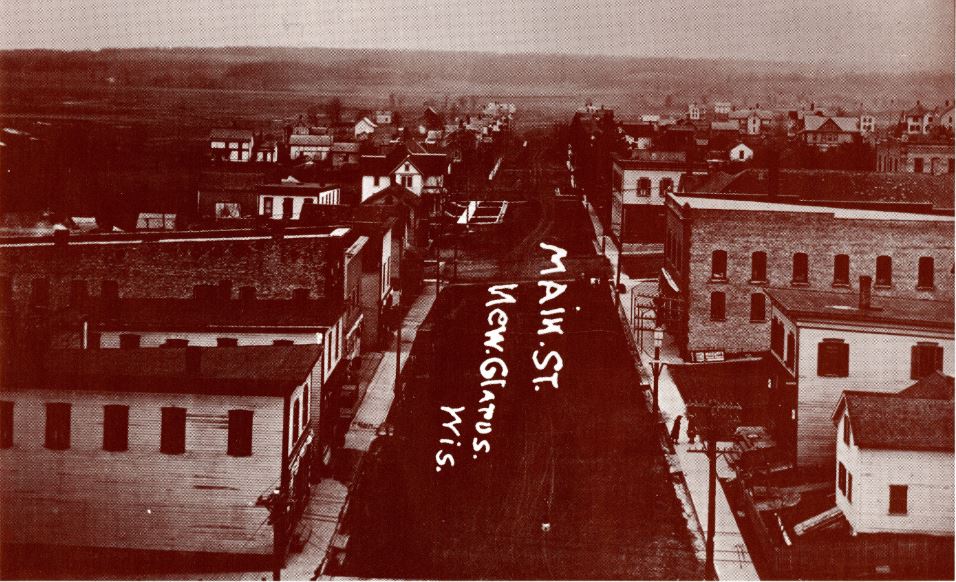 This view taken from the new Swiss Church steeple shows Main Street (First Street) around 1906, before the Bank of New Glarus building replaced the two frame buildings on the right in 1910.  Electric poles and lamps line the street and hitching posts were still needed - the "horseless carriage" had not taken over completely. 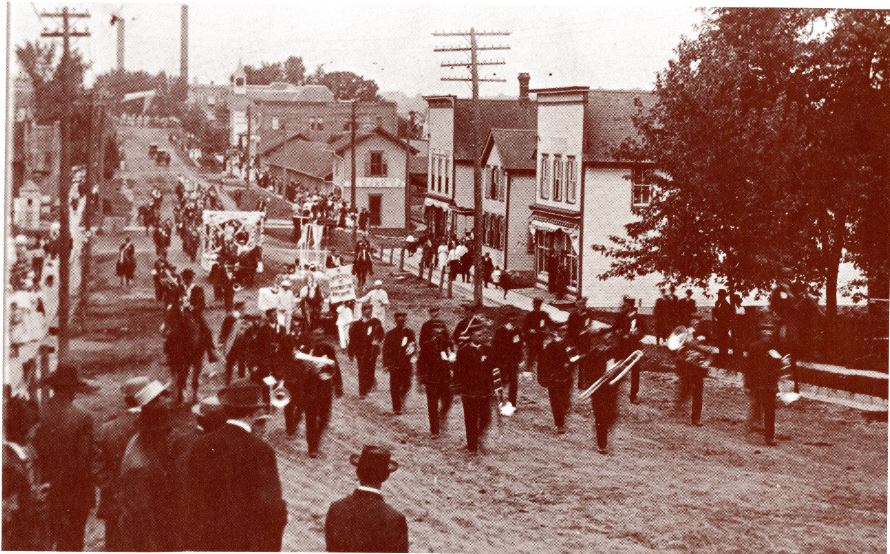 Everybody loves a parade!  Judging by the many photos of them, New Glarus seemed to have lots of parades in days gone by.  Folks in their Sunday best are watching what is likely the New Glarus Imperial Band in their new uniforms.  The right side of Second Street shows the new Citizens Bank building on the corner, built in 1910, which dates the picture somewhat.  The lot where the former Zweifel Motors garage building now stands was still vacant.  Notice the lumber yard buildings where the village park is now located. 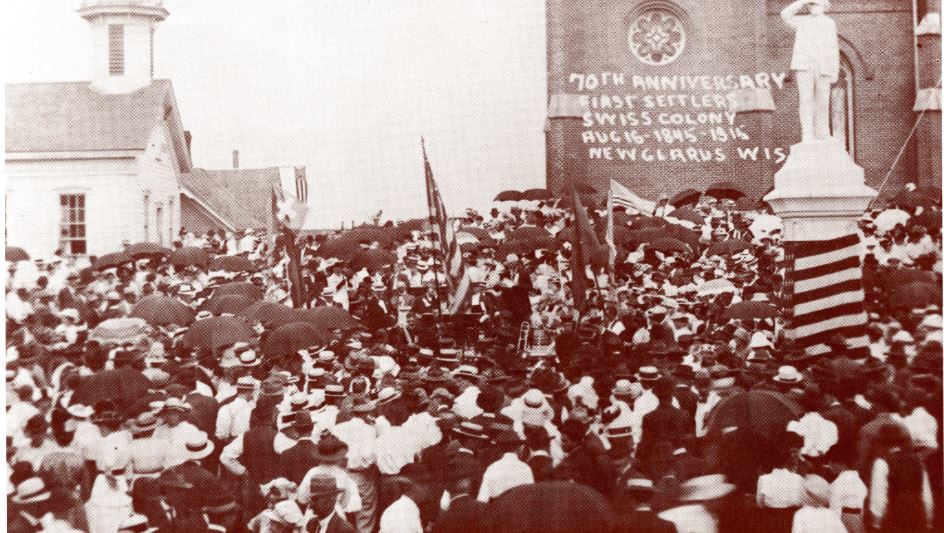 In 1915, a huge crowd gathered on the Swiss Church grounds for the 70th anniversary of the town, the highlight of which was the unveiling of the Swiss Settlers' Monument.  It was August 16 and the picture shows the crowd in their Sunday best, many of the men in coats, ties, and straw hats, the style of the day.  Eight living pioneers, all babes in arms when they arrived in New Glarus, were honored guests.  The monument is caught by the photographer in the act of being unveiled.  In the center, you see the band and the platform with the dignitaries. 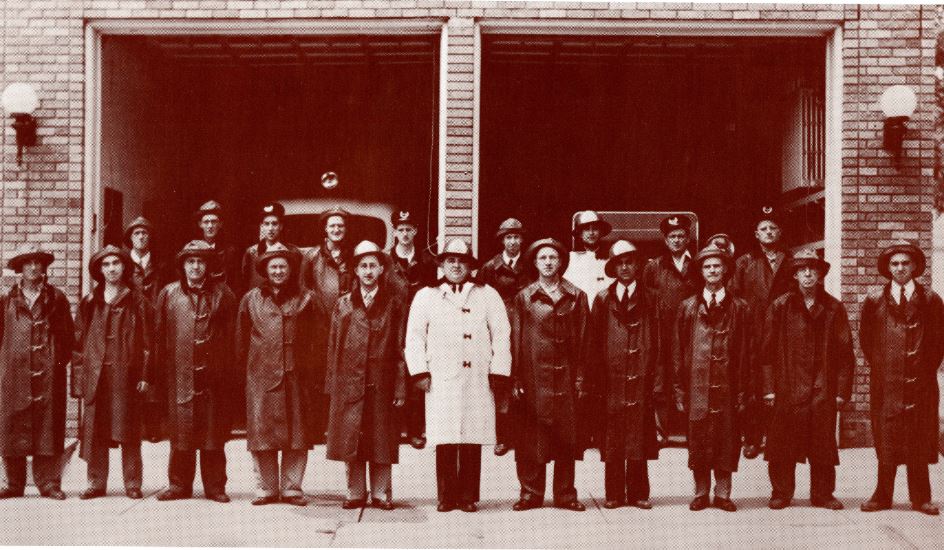 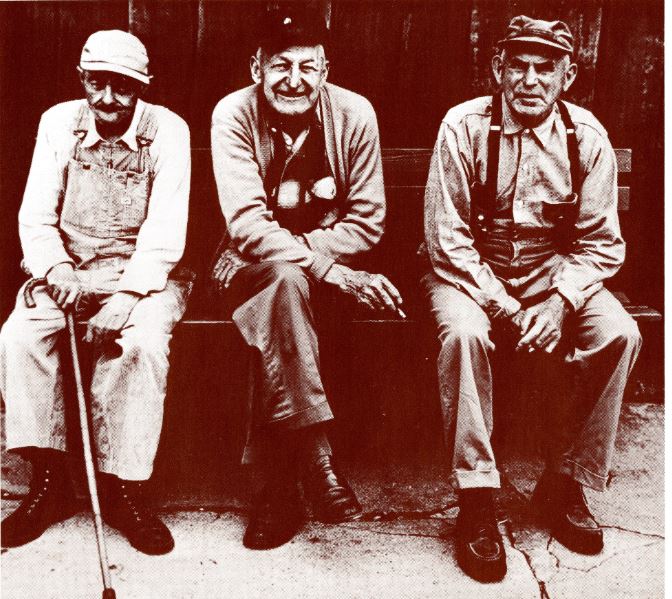 Parked on this bench are some old-time examples of New Glarus' melting pot.  This 1967 photo is of Sebastian Theodore Schiess, Henry Klassy, and Fred Krauss.  Schiess was an Appenzeller, Klassy a Glarner, and Krauss said he was "German but the Swiss messed him up."  Wouldn't it be interesting to take a trip back in time and listen to the combined dialects? 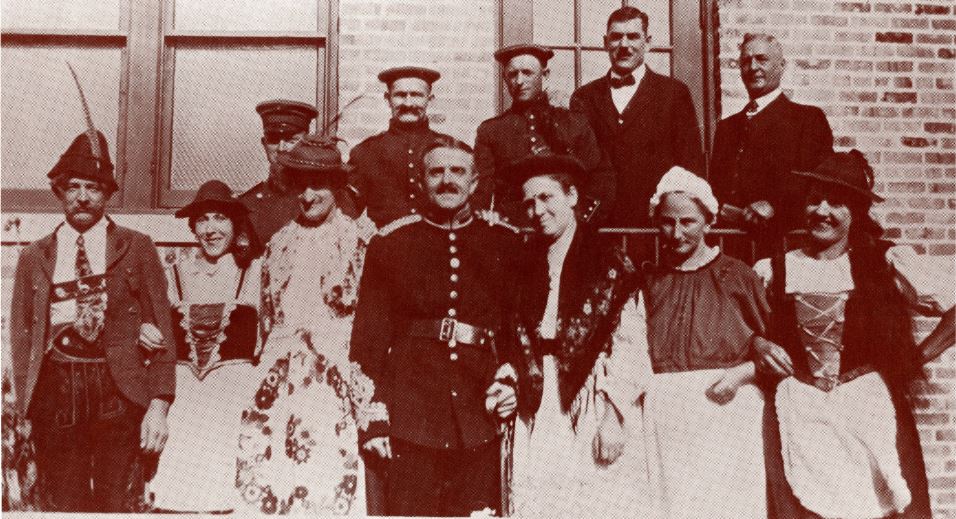 Karl Mueller, one of the original members of New Glarus' first Mannerchor, provided us with the information about this picture.  He believes it was taken in 1933 or 1934.  A mixed choir group used to get together for their own entertainment.  Why they're in somewhat unusual garb, we don't really know.  The people we can identify are (front row):  unknown, ? Neuenschwander, Rosie Rufenacht, Rudi Voldenwieder, unknown, Hedwig Voldenwieder, unknown.  Back row: unknown, August Fiez, Alfred Fuchser, Ed Voldenwieder, and Mel Schiesser. 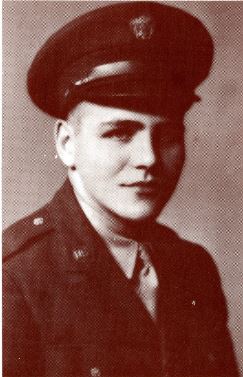 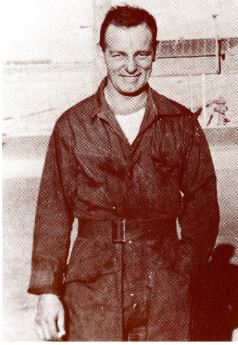 Left:  Palmer "Butch" Strickler served in the infantry in the European theater of war.  His service took him to Normandy, Northern France, the Rhineland, and Central Europe. He was awarded European, African, and Middle Eastern theater ribbons and four bronze stars.

Right: Rudolph Schneider, who passed away in 1970, served in the Army Air Force from June 1938 to January 1941.  He was drafted back into the service shortly after the war started, in 1942.  He attended Air Force mechanics school and served until his honorable discharge in November 1945. 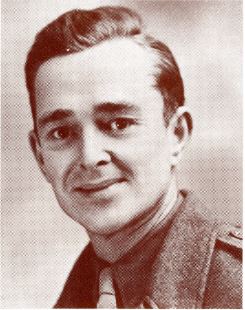 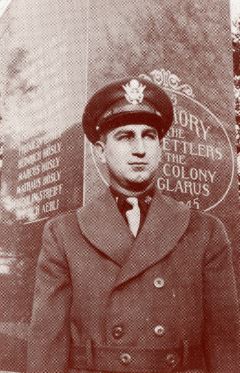 Left:  Bill McFadden also served in the European theater.  He served in Nazi-occupied Belgium, and fought in the Battle of the Bulge, the war's largest single battle, where he won a bronze star.

Right: Eugene Stuessy entered the U.S. Army in September 1941.  He served in the Medical Corp, then entered Officers' Candidate School at Edgewood Arsenal, Maryland, and graduated with a commission in 1943.  After training in chemical warfare, he joined the action in the Pacific theater.  He took part in the invasion of Guam in July 1944 and the October invasion of Leyte Island in the Phillipines, where he won the bronze star.  In March 1945, Gene was involved in fierce fighting on a small group of islands near Okinowa and was 100 yards from the famous  war correspondent Ernie Pyle, when Pyle was killed by a Japanese sniper.  On April 30, 1945, Stuessy was severely wounded at the fortress of Shuri Castle in the invasion of Okinowa.  This ended his combat role in the war.  He was commissioned a Captain at the time. 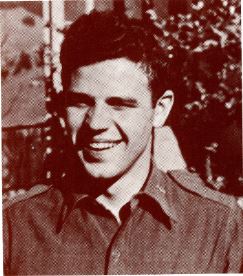 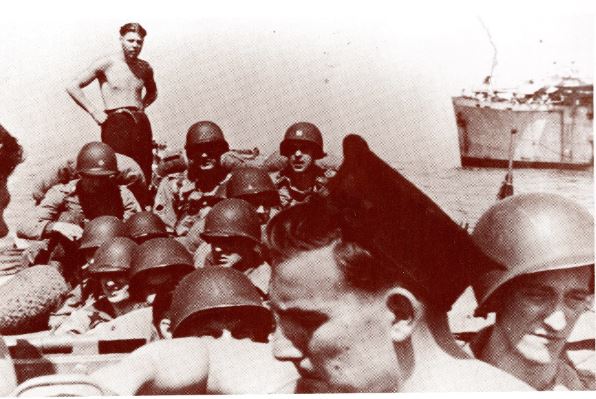 Left: George Hartman was an Air Corpsman who served 40 months as a co-pilot in the European theater.  His plane was shot down and he survived in a prisoner-of-war camp in Switzerland until war's end.  He was discharged a first lieutenant.

Right:  Millard Tschudy is the young man at the very right of this picture.  It shows him aboard a British Navy landing craft with a U.S. Army Intelligence TEam, heading for Omaha Beach in Normandy.  Tschudy served in the U.S. Army Signal Corps. 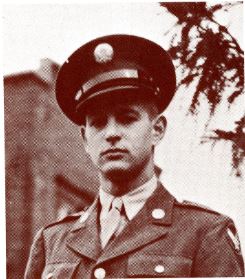 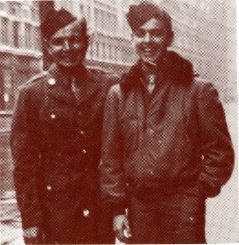 Left:  William E. Kuenzi, Sr. served for 35 months in the Air Corps.  He was discharged as a staff sergeant.  His overseas duty was in the Asiatic theater.

Right:  Dorral (left) and Gordon Gmur served in the Air Corps.  THey are shown here in London for what was a brief get-together during their war years.  Dorral served with a fighter squadron and Gordon was a gunner with a heavy bomber squadron, both in the European theater of operations.