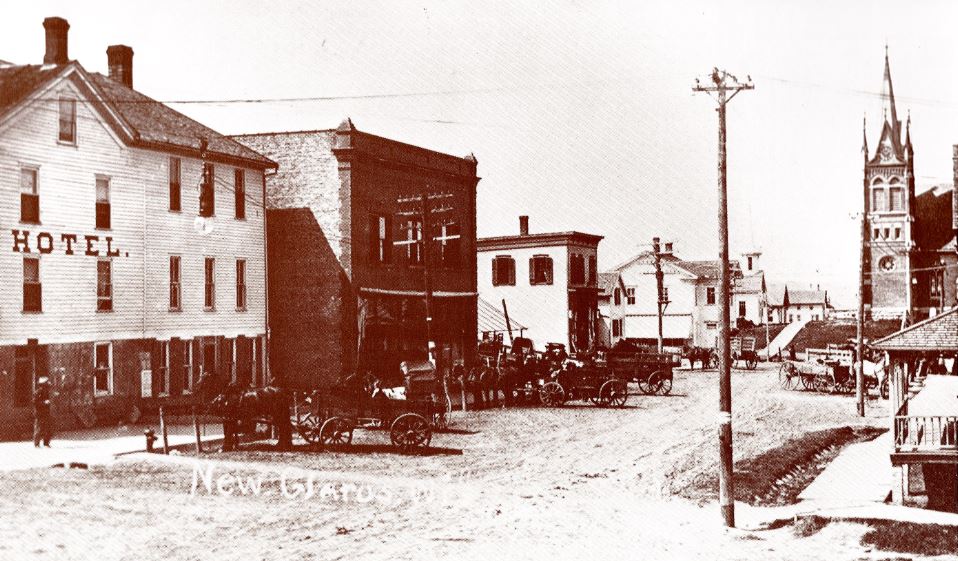 The actual date is unknown, but we do know that the picture was taken at 10:10 AM, if the clock atop the Swiss Church was working that day.  You're looking at the West side of the 500 block of First Street, sometime after the construction of the church in 1901, but before the motor car became a common sight on the still-unpaved streets of New Glarus.  Notice the Hotel before the balcony was added.  The two buildings at the end of the block where the bank is now were Hoesly's Hardware and the Henry Duerst house.  It looks like wooden sidewalks were still the fashion on Main Street at that time. 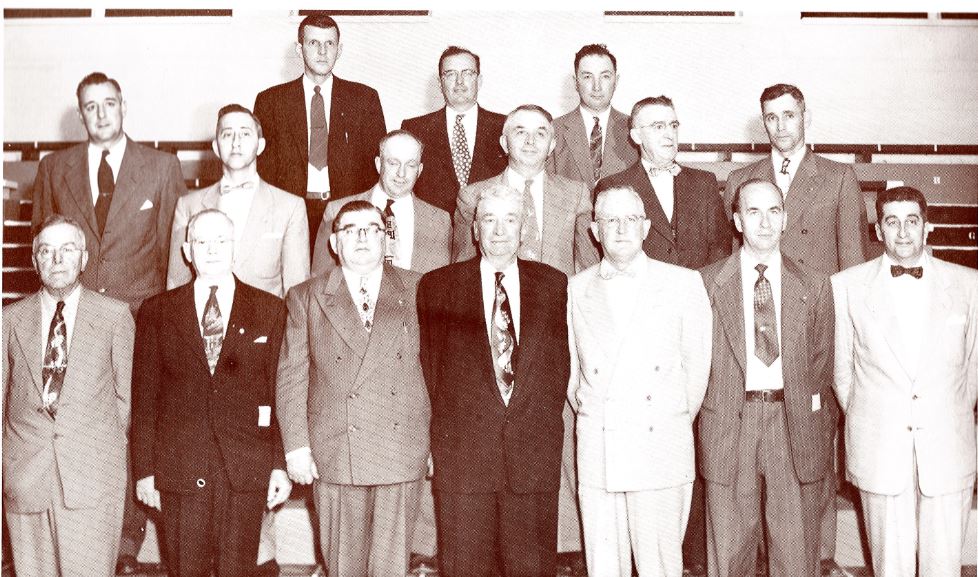 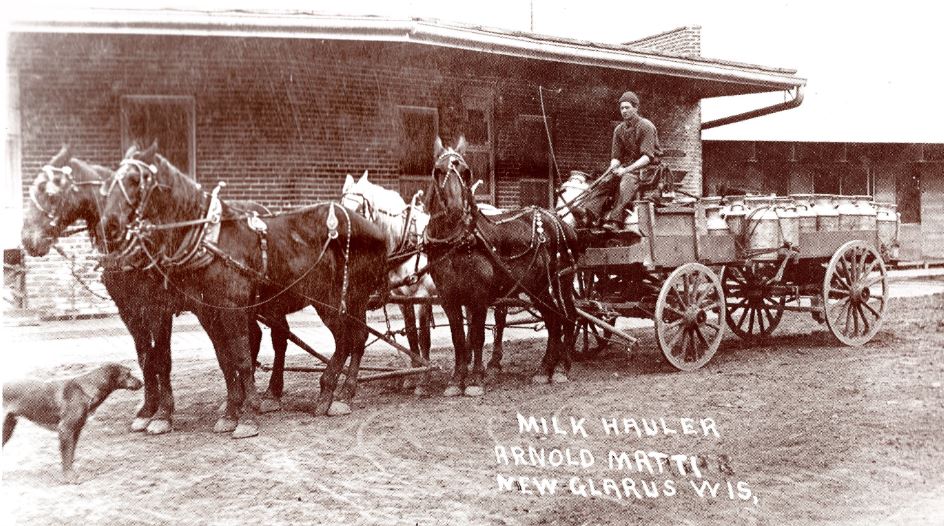 Milk haulers didn't have those huge, shiny tank trucks in the early days of dairying in Green County.  Up until about 1910, they'd be hauling their cans to the milk and cheese plants by horse-drawn wagons.  The driver of this team is identified as Arnold Matti and the scene is the New Glarus Pet Milk plant on Second Street, a busy place and one of the community's largest employers until it closed in February 1962, leaving 80 workers without jobs. 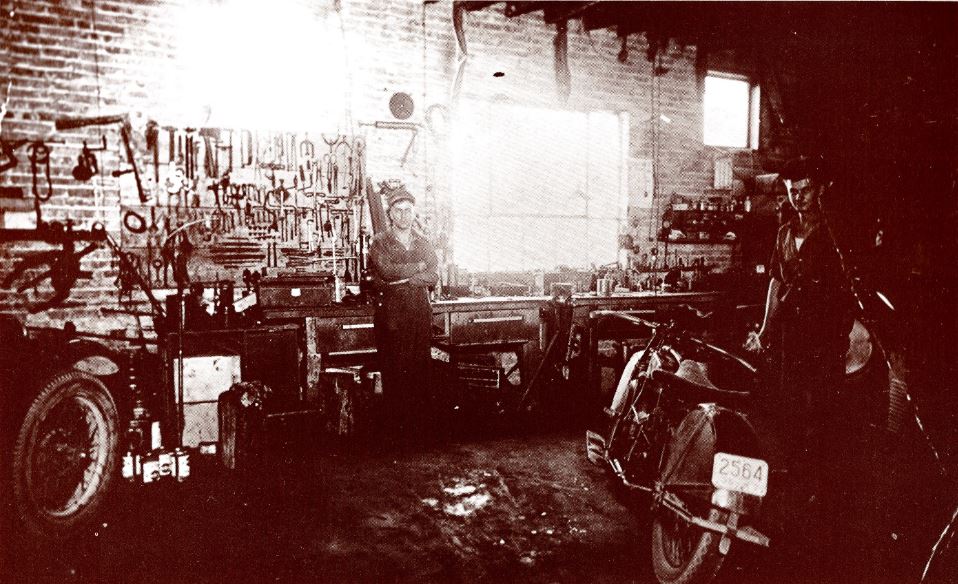 Surrounded by the tools of his trade and leaning against his workbench is Alfred (Alfie) Eggimann.  The other gentleman is Melvin Lindgard.  Eggiman's Garage served the mechanical needs of the Mt. Vernon/New Glarus area.  This photo was taken in 1935.  Eggiman's shop repaired farm machinery, cars, trucks, tractors, and, obviously, motorcycles.  Alfie was the father of Lillian Bigler. 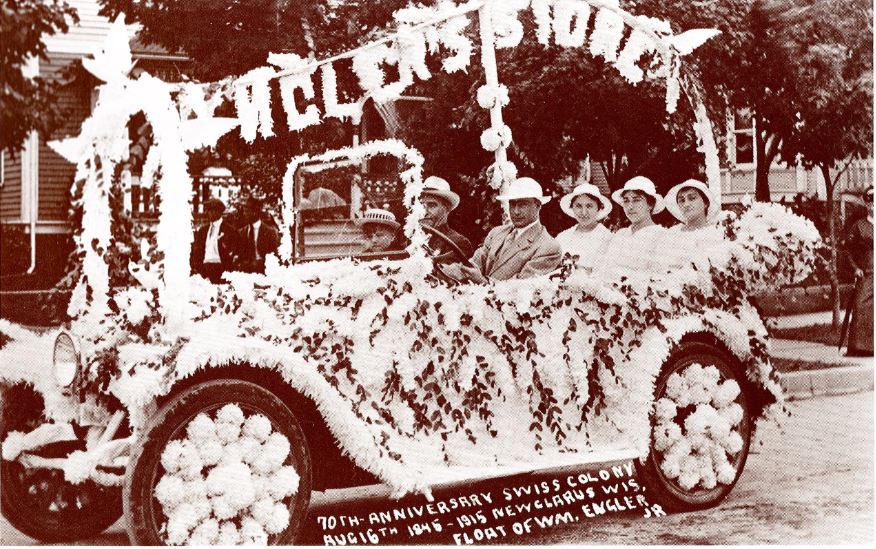 In 1915, Engler's float was part of the parade marking the village's 70th anniversary celebration, which also included speeches, music, and the unveiling of the pioneer monument on the Swiss Church lawn.  The intricate float would be hard to duplicate today.  Store owner William Engler Jr. is holding a young man on his lap.  The driver is unidentified.  Two of the ladies in the back seat are tentatively identified as (left to right): Mrs. Clara (William) Engler and Lena Engler, with the woman at right unknown.  Engler's was a popular variety store selling everything from groceries to shoes to clothing, and they would take your fresh eggs in trade. 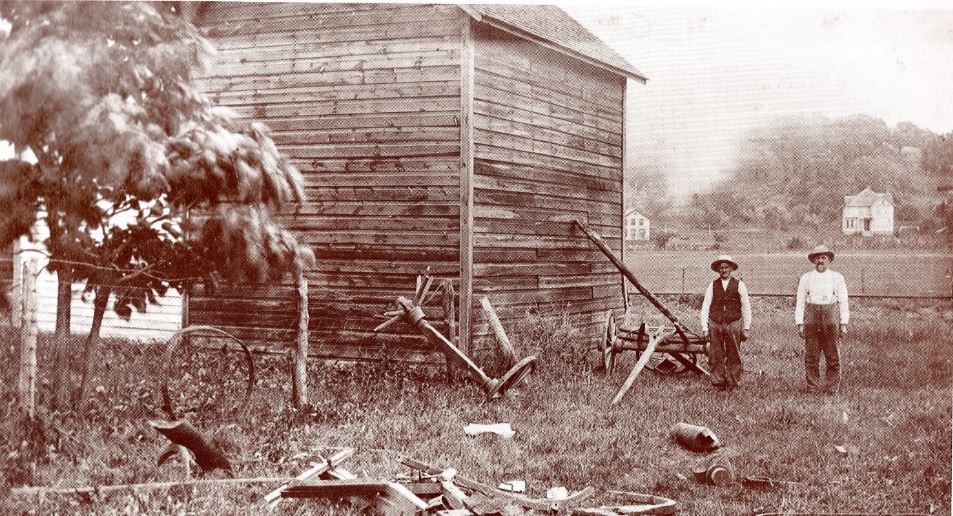 New Glarus once had two cannons, one being a longtime fixture in front of the elementary school.  Shown here are the remains of New Glarus' other cannon, which blew to smithereens one Fourth of July.  Both cannons were forged in England, had apparently been used in the U.S. Civil War, and were shipped to New Glarus in 1900.  In August 1993 the Swiss Village Museum purchased the remaining cannon, with plans to use it as a monument to all veterans and for demonstrations throughout the Midwest.  Details on the demise of cannon number two are sketchy, but the remains of the cannon and its carriage are scattered in front of Fridolin Streiff and Ulrich Kubly.  The building in the background is the Elmer house, behind Roy's Market.  The cannon apparently blew up near Railroad Street during a ceremonial shooting, a regular part of the community's Fourth of July celebration.  This marked its last and biggest blast. 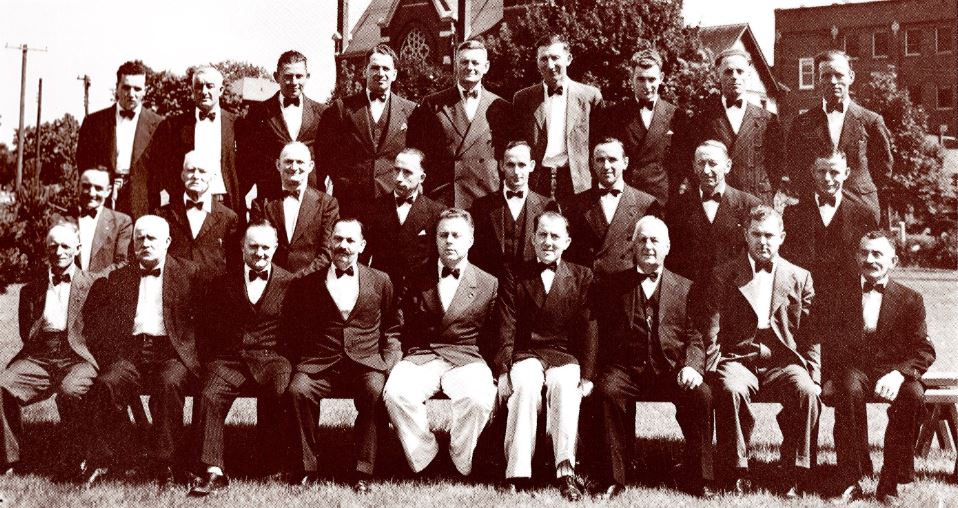 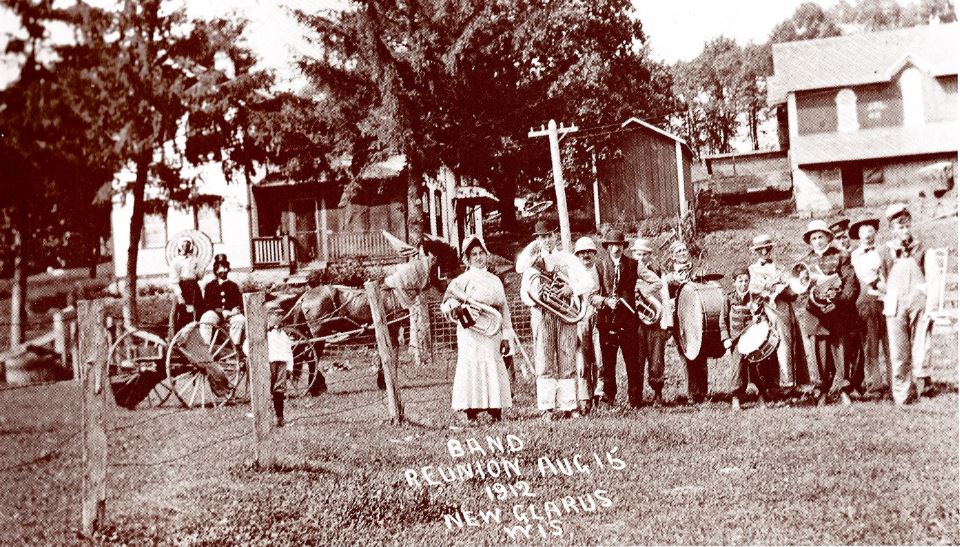 The hobo band provided lots of fun and entertainment.  Popular tunes at the time were "Down By the Old Mill Stream" and "Take Me Out to the Ball Game."  No one seems to know who the people in disguise were, but the picture was taken in front of the Held farm.  The Helds were known as a family without much musical talent.  Some of the farm land was eventually sold to the New Glarus Home and the Baptist Church.  The house is now Paul and Julie Jennrich's on Fifth Street.  The barn belonged to the adjacent Luchsinger farm. 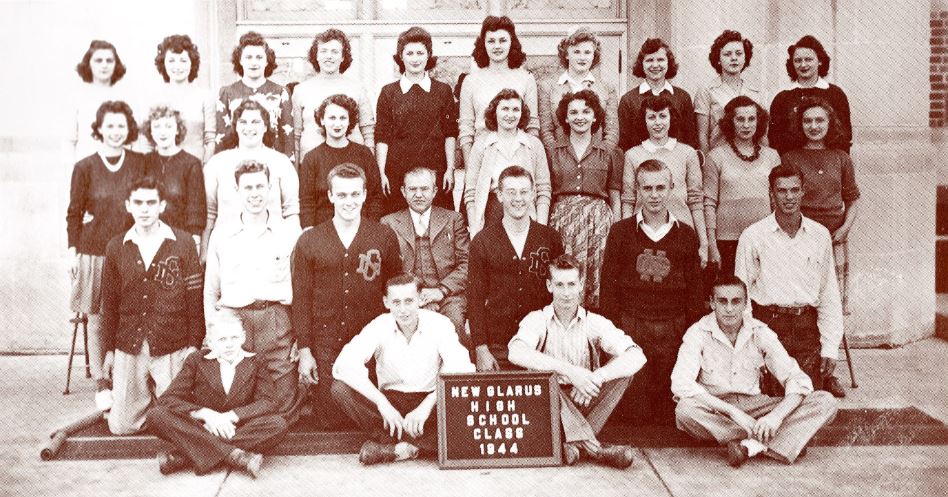 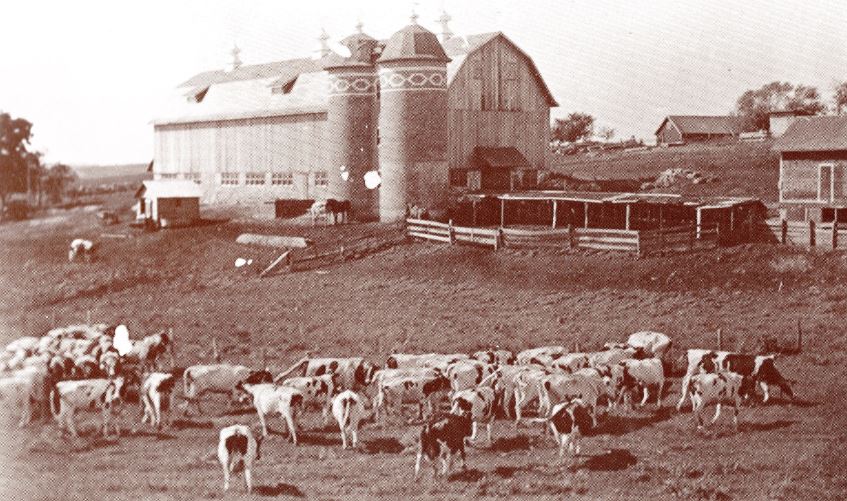 These nationally-recognized holsteins were well tended by the Elmers on this family farm.  Ralph Elmer owned and operated the farm on Farmers Grove Road until 1971.  Ralph's dad, H. Otto Elmer, was born here in 1895 and and married Esther Hoesly in 1918.  The couple took a wedding trip to Monroe and a four-foot snowstorm confined the newleyweds to relatives there for a week.  A railroad crew of 10 men shoveled the track clear so they could return home.  Upon reaching New Glarus, the crew "shivaried" them and Otto bought them a keg of beer.  Real life began.  They borrowed money for groceries, the farm, and the new barn.  This 1920 photo shows the barn before it was painted.  Two hundred hardwood logs were cut by hand and hauled to the Postville sawmill to make the lumber.  Nine carpenters and four stonemasons were boarded at the farm during the week while construction was underway.  Otto and Esther died in 1973. 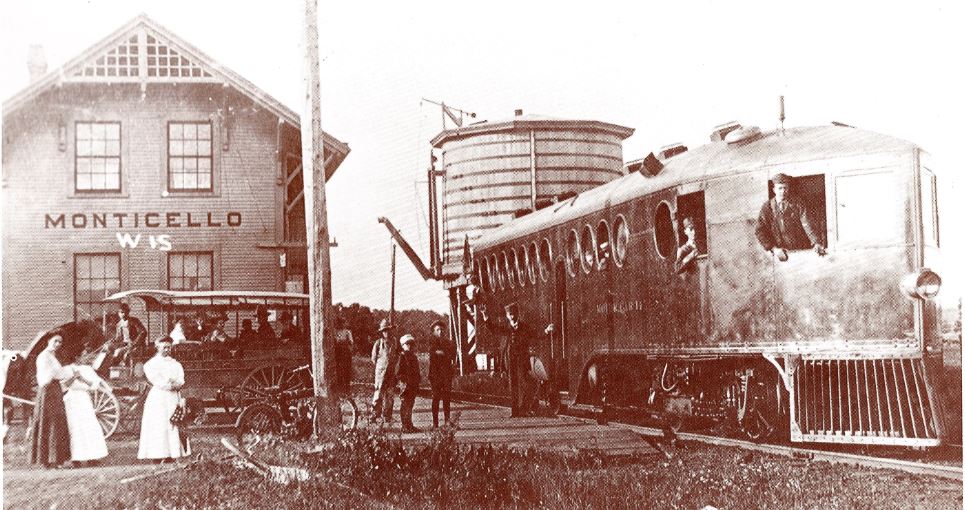 The good old days at the Monticello Depot - The year is unknown, but it was the 1890s or early 20th century in the horse-and-buggy days.  The Illinois Central had a one-unit motor car passenger service, called the "pocket train," which ran from Freeport to Madison.  This line bypassed New Glarus.  Passengers were able to board at Monroe, Monticello, Exeter, Belleville, and possibly other stops along the rail line.  Between Monticello and Belleville, they passed through the long tunnel near County CC and Tunnel Road in Exeter Township.