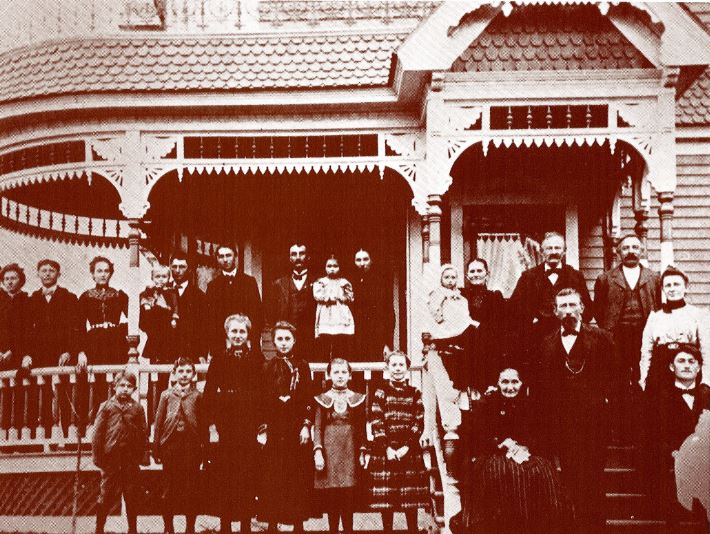 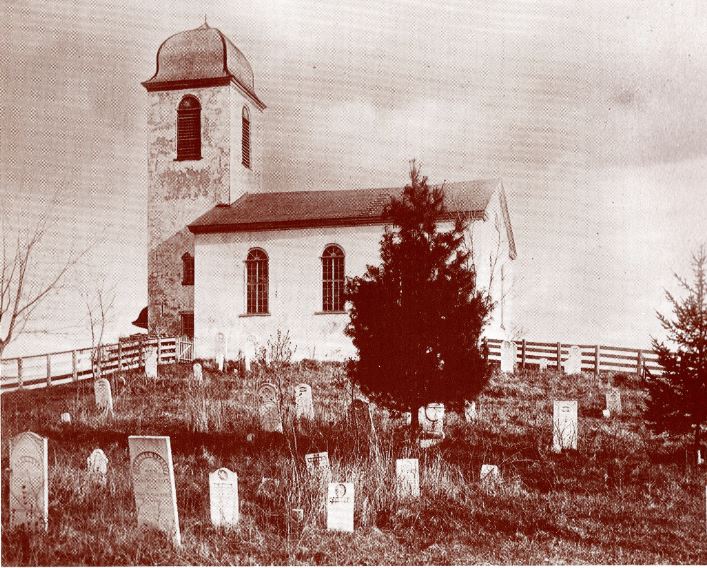 This beautiful stone building, completed in 1858, replaced the original log Swiss Reformed Church.  Volunteer labor built the church for $1,950.  Some years later, members decided the location of the cemetery on the church grounds had been a mistake, and they purchased land for a new cemetery for $250.  The new cemetery was dedicated on January 25, 1874.  Some of the tombstones and grave markers were removed during construction of the present brick Swiss Church in 1900 and stored in the basement of the new church until they were placed near the replica log church at the Swiss Historical Village in 1952. 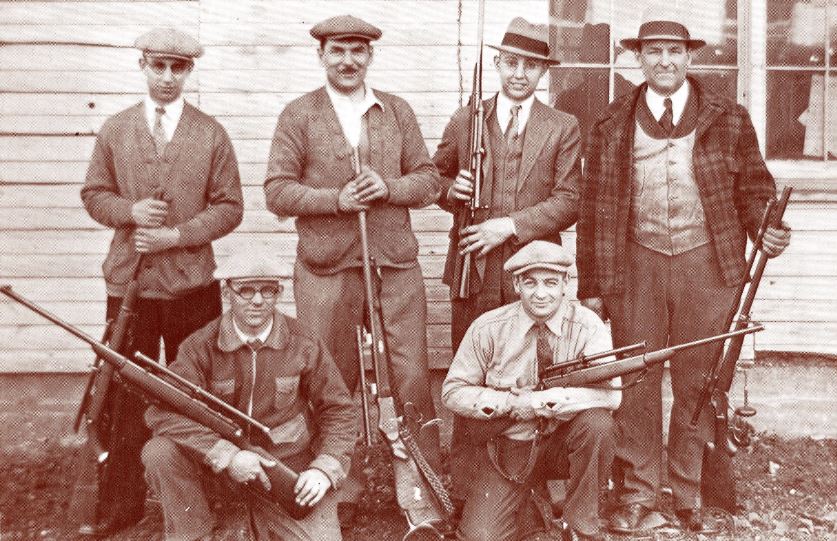 These fine gentelmen belonged to the New Glarus Rifle Club in the 1930s, and had recently returned from Madison, where they won first place in the State Rifle Club competition at Camp Randall.  The New Glarus club met in the basement of the Jack Hauri tavern.  Members wore attractive red corduroy with the club insigina on the back.  Meets were held as far away as Dubuque, Rewey, and Brodhead.  The team pictured here are (back row): ? Maurer of Monroe, Edward Vollenweider, Fred Burki, Dr. Henry Hoesly.  Front row: Leamon Gross, Dr. Clifford Bartle.  Some members not pictured were Scott Hilton, Fred Haldiman, and Milo Hoesly. 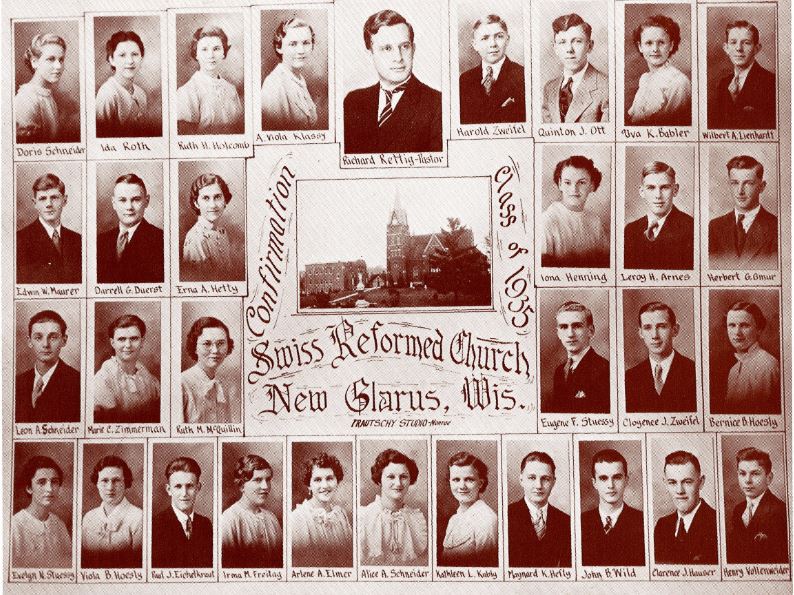 Listen closely and you may hear the echoes of this "angelic" group, the class of 1935.  They were confirmed by Swiss Church Pastor Richard Rettig, who served the church from 1928  to 1942.  With nary a hair out of place and in their Sunday best, don't they all look so happy at the finale of confirmation classes! 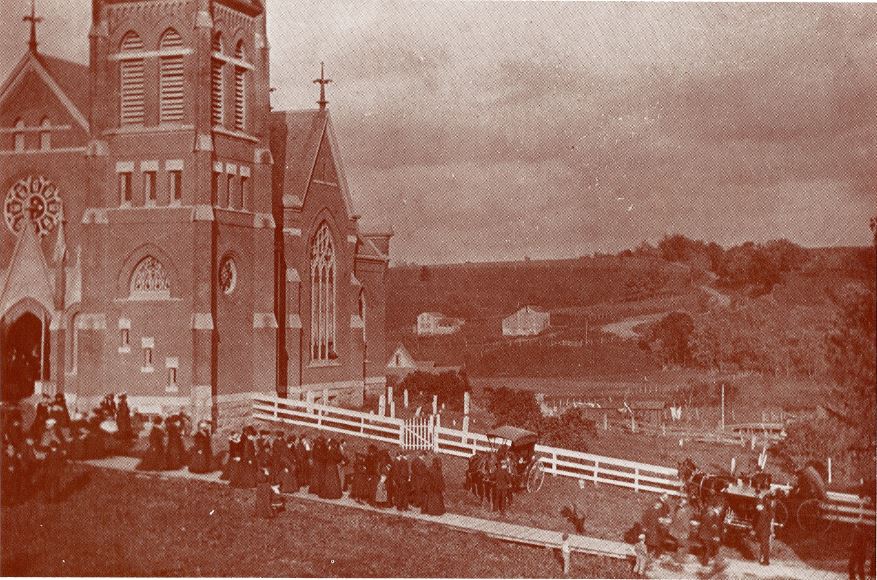 In 1903, family and friends dressed in their best black attire to follow Fridolin (Fred) Kundert's casket down the boardwalk to the horse-drawn hearse, having attended the funeral in the almost brand-new Swiss Church.  Fred was "grandpa" to Paul Klassy Sr. and Velma Hershberger.  Kundert was one of the founding fathers of the Bank of New Glarus and its first president. 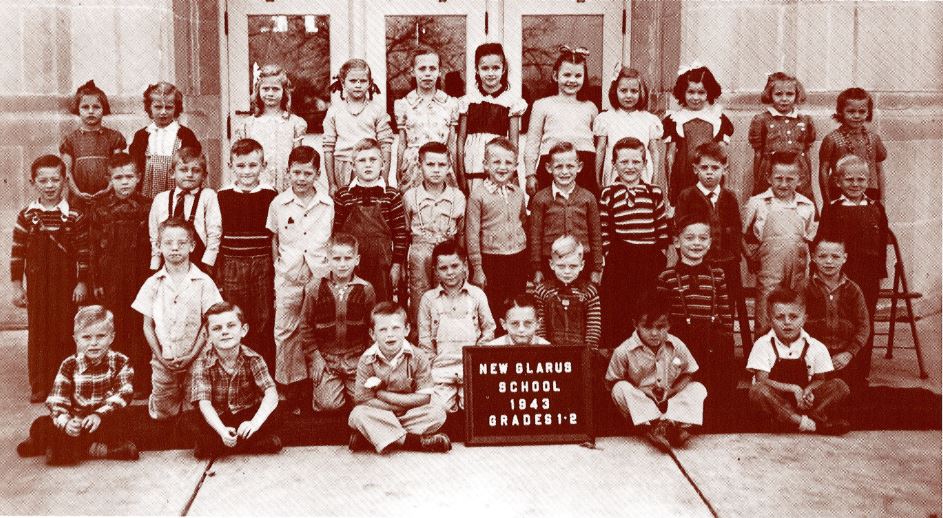 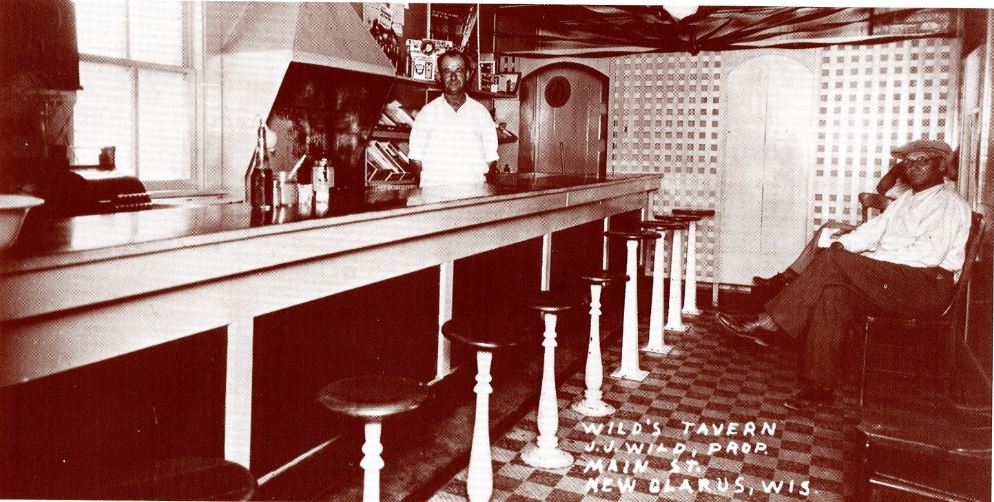 Wild's restaurant, shown in this picture from around 1930, was operated by J. Jacob Wild (behind the counter), Dave Wild's father.  We haven't been able to identify the customer in the chair.  The business was located in the Hinderstaetli (Backtown) across from what is now Flannery's Wilhelm Tell restaurant on Second Street.  The wood frame building and a house behind it were later torn down and replaced with the New Glarus theater, built by Fred Lienhardt in 1950.  The theater closed in 1967 and the building was sold to Roy Ziltner who operated his grocery store there.  It later became the Buyer's Mart.  Wild's moved across the street in 1937.  Old-timers remember that Wild's advertised "the biggest 5 cent hamburger in town."  Beer and liquor were not "officially" sold in the years of national prohibition from 1920-1933, but some old-timers remember (but will not officially admit to) obtaining beer and hard stuff from various unidentified sources during those years. 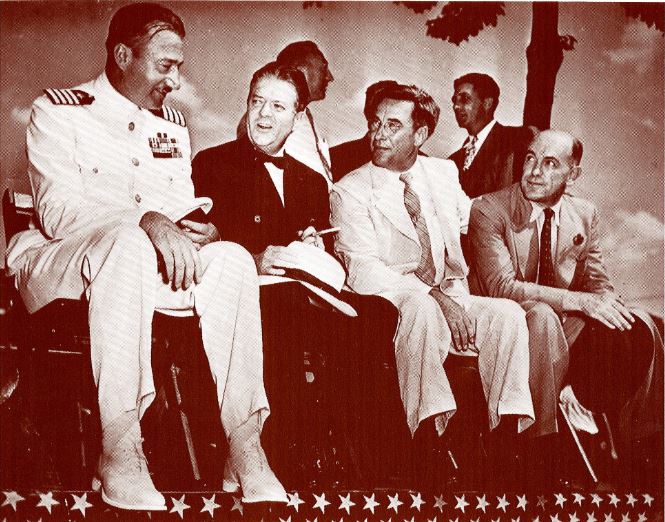 New Glarus celebrated its centennial in 1946,  one year late because of the war.  As usual in major anniversary years, there was a big parade.  Sitting on the parade reviewing stand (second front left) is U.S. Senator Bob LaFollette Jr.  This was LaFollette's last year in office, ending a period of 40 straight years in which a LaFollette (Sr. and Jr.) served Wisconsin in the Senate.  The Senator is talking with New Glarus' highest-ever ranking military personage, Vice Admiral Walter Schindler, a much decorated aerial gunnery officer in the Pacific theater of WWII who went on to hold a high naval post in Washington D.C. after the war.  Admiral Schindler passed away in 1991 at his retirement home in Sarasota, Florida. 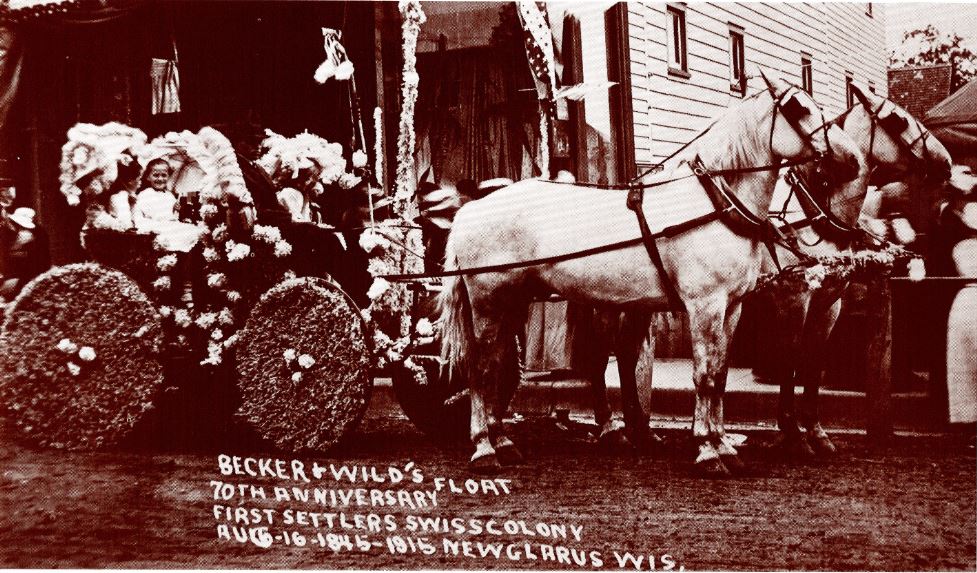 This float in New Glarus' 70th anniversary parade was sponsored by Becker & Wild's, a grocery in the village.  The building in the background was the store.  It had been operated as S.A. Schindler's for many years before it was taken over by Melvin Becker and Matt Wild. 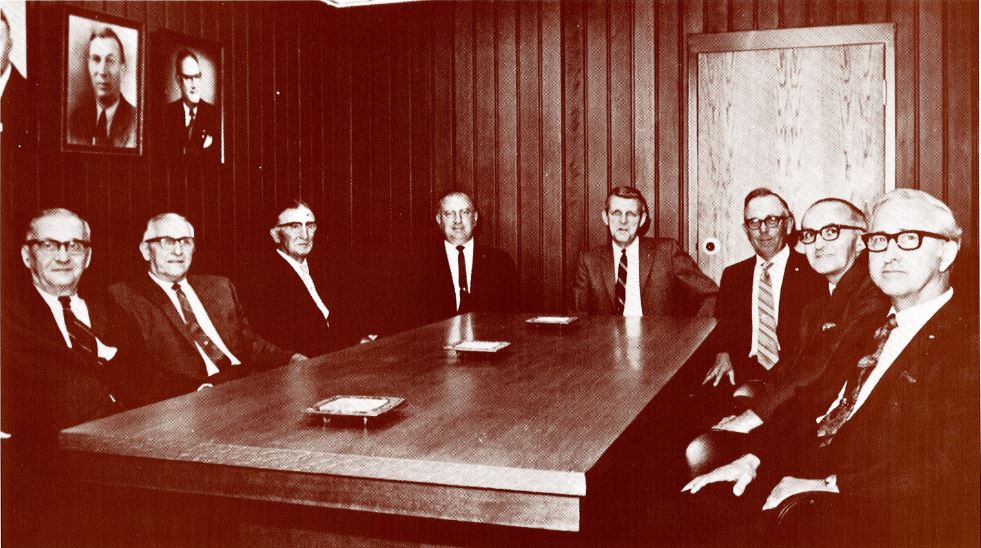 (Photo from the Bank of New Glarus archives)

1970 was a big year in the history of the Bank of New Glarus.  On June 21, the bank moved in to the present building at 501 First Street, after having temporary offices in the old fire station while the new building was under construction.  The 1970 directors posed for a picture around their new board room table.  (Left to right): Jacob Urben, Joshua Hoesly, H. Otto Elmer, Eugene Stuessy (secretary), Waldo Freitag (president), Quinton Ott, Gerald Disch, and Harvey Ott. 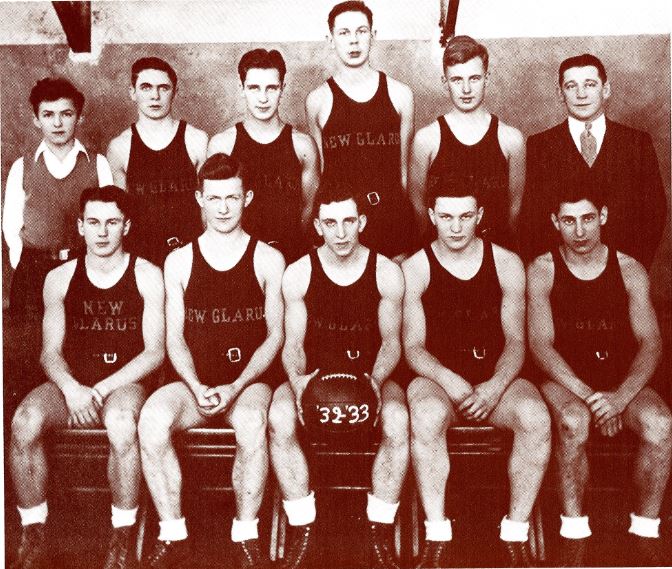 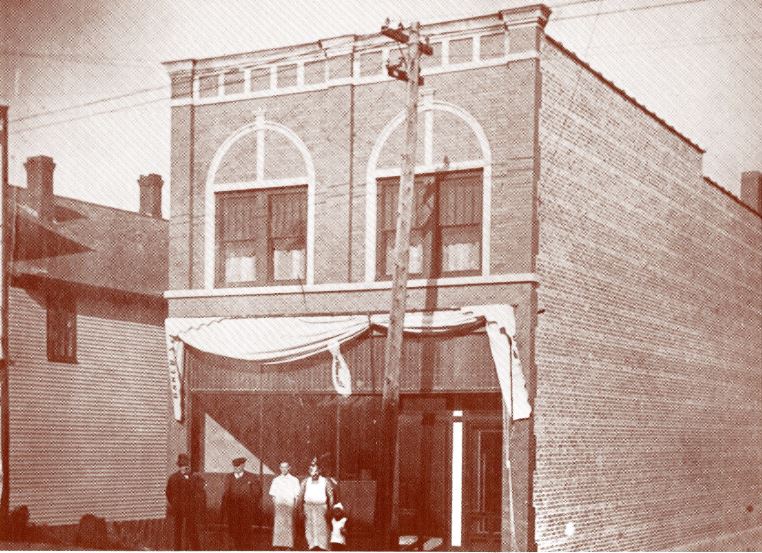 The tiny tyke in this picture (holding the loaf of bread in his arm) is none other than Otto Puempel, who retired in 1992 as owner and operator of Puempel's Tavern.  Otto is standing next to his dad, Elbert Wolf, owner of the New Glarus Bakery at that time.  Gottlieb Matzinger, a bakery employee, is next to Ebert, and two salesmen visiting the bakery are also pictured.  Note that the butcher shop had not yet been constructed next to the bakery.  This picture must have been taken around 1917 or 1918.  Otto was born in the bakery building in 1913.  His mother, Rosina, died in 1917, and Ebert died in the flu epidemic of 1918.  Otto was then adopted by the Otto Puempels and moved to his new home above the tavern, where he lived for 74 years until he sold the business in 1992.