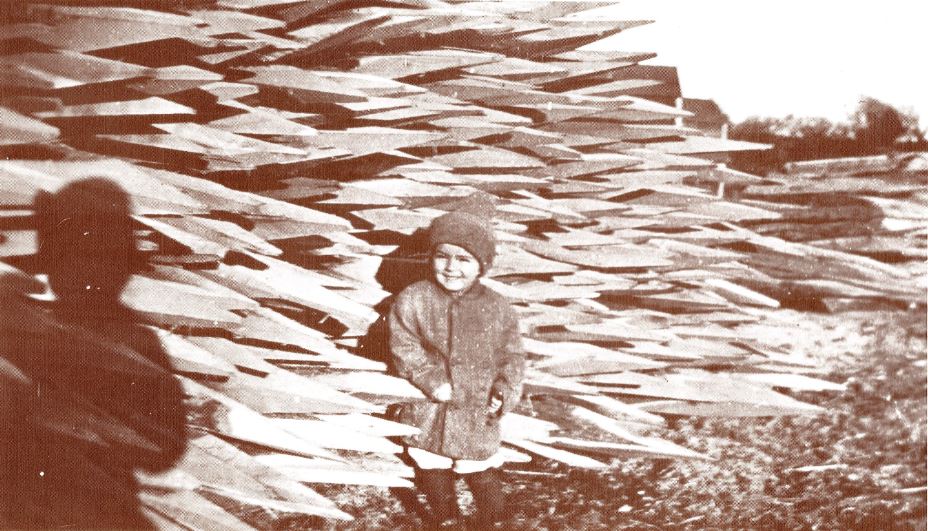 Imagine the pleased expression on the face of the woman who took this picture of a very young Gerry Disch.  Fence posts like these were cut from new oak on a saw which might have been mounted on the front of a tractor and powered with a belt drive.  This pile probably took several days to prepare, first by splitting the oak, then sharpening the post ends.  Driving the posts in our rocky terrain was another chore joyfull sought after by the youngsters of each farm family. 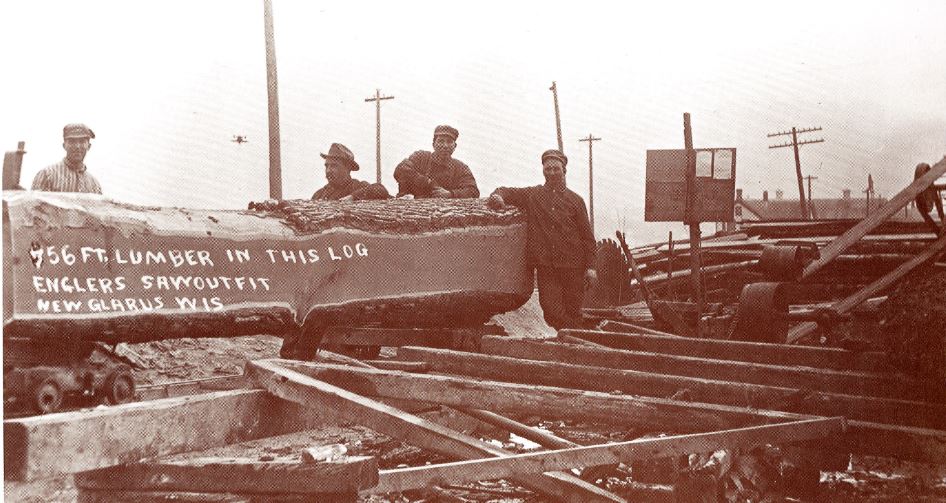 Hardwood logs still come out of the woods around New Glarus, and we still have a few operating mills in the area.  If our information is correct, this lumber mill was set up about where the village swimming pool is located.  The building in the background might be the older apartment house on Hell's Flats - now better known as Fifth Street and Sixth Avenue.  At one time that apartment house was located on the site where the Kramer Hardware building now stands. 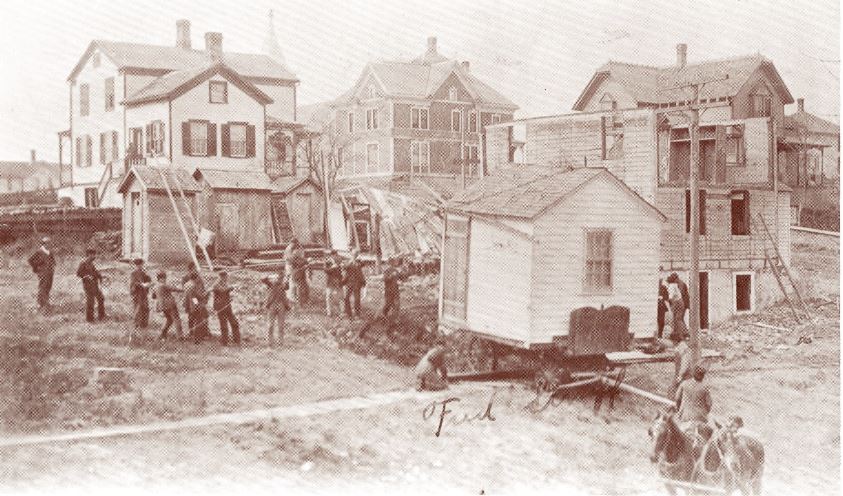 The moving of buildings was not uncommon in New Glarus.  This elaborate operation took place near the corner of Fifth Avenue and Second Street, where Kristi's Restaurant is now located.  Many hands hold the building while the horses are hooked to the whiffletree.  Helen and Bill Capellero's house is located across the street with the gingerbread detailing on the roof line long since removed.  The actual building being moved appears to be located in this picture about where the old bank building now stands on the northeast corner. 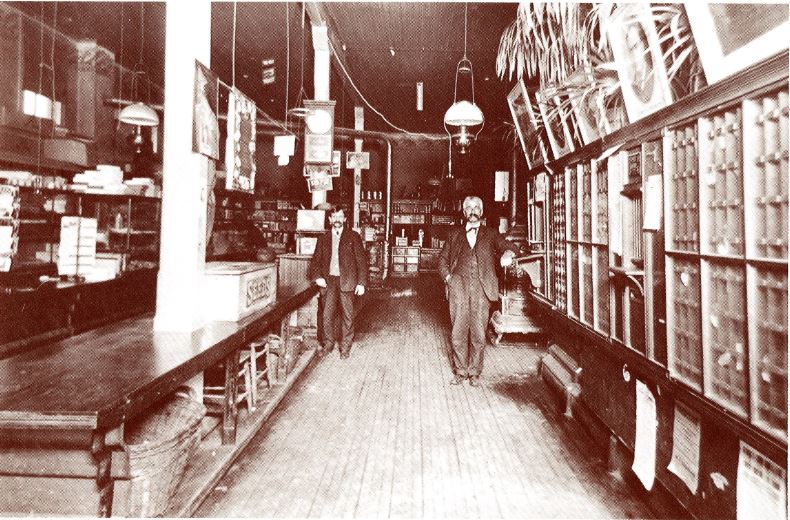 The interior of the store and post office of B.A. Kundert's looked like this on April 29, 1909.  The building stands today across from the New Glarus Hotel.  It was originally the Bank of New Glarus building, and after being Kundert's store, became the telephone company quarters.  The postal clerk, Nic Elmer, stands to the left, and B.A. Kundert, proprietor, is at the right.  The trim near the ceiling was probably stenciled.  The free-standing stoves added a touch of class. 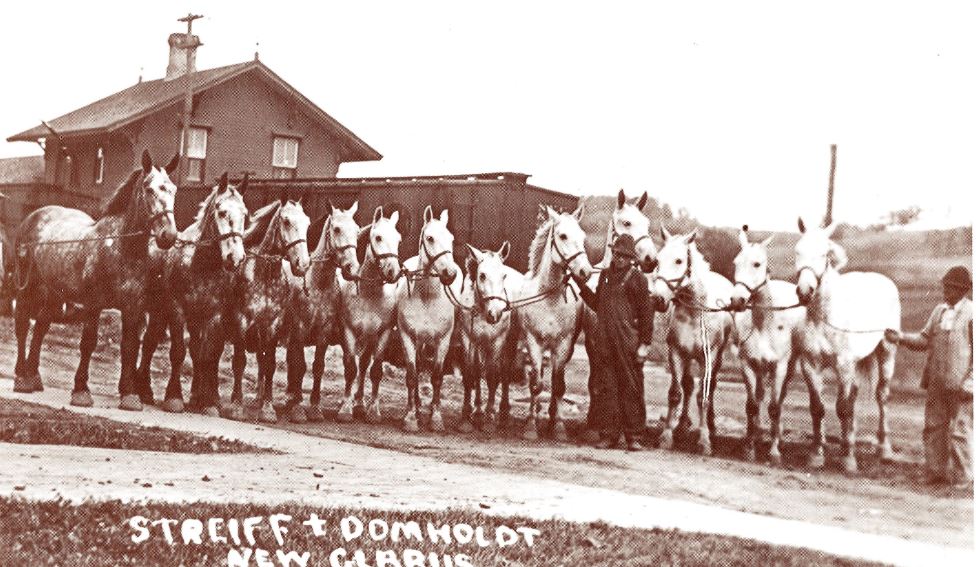 The Streiff-Domholdt stables were located near Railroad Street and Fifth Avenue.  This good dozen were matched for color and seemingly ranked by size. 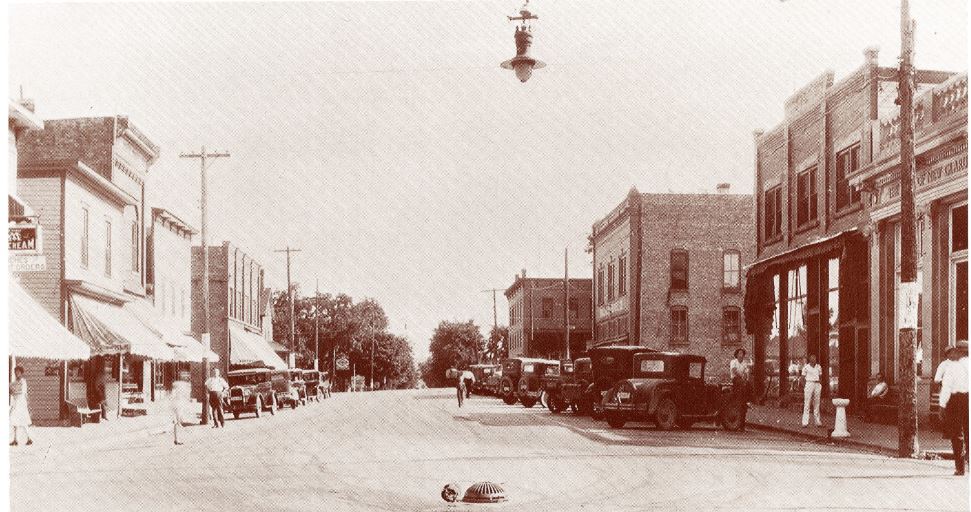 This picture, at first glance, is just another New Glarus street scene.  But something is hapening here.  Most of the people are looking up and to the right.  What can it be?  Pictures like this were taken in the 1930s by firms that specialized in small town street scenes. 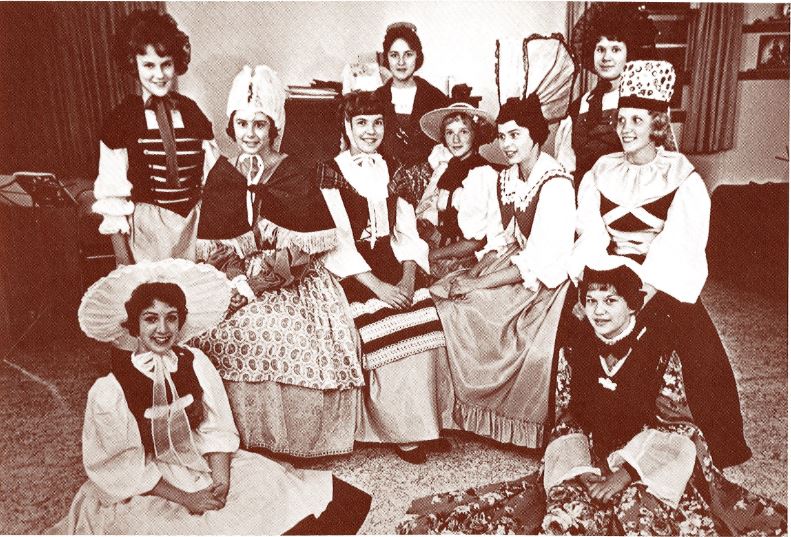 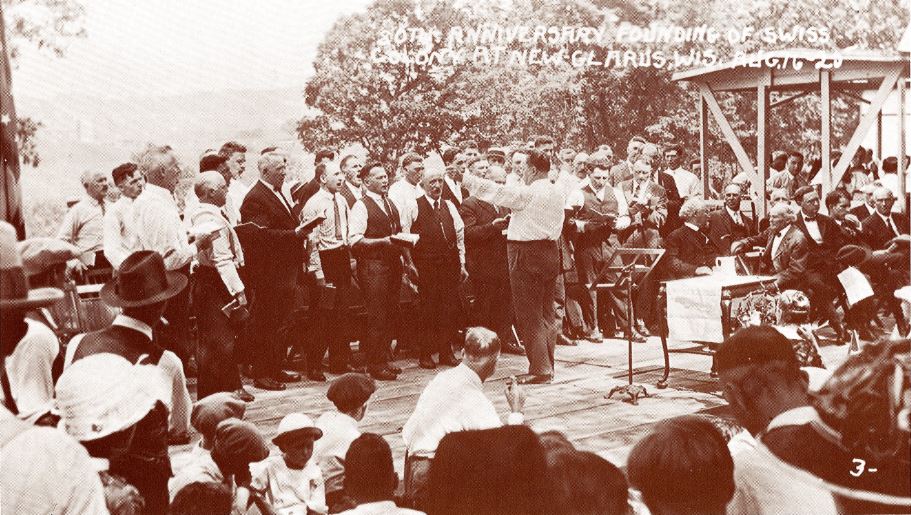 Volksfest, on the first weekend in August, celebrates Swiss independence - the coming together of the first three Cantons, Uri, Schwyz, and Unterwalten in 1291 to overthrow the Austrians.  The present-day Maennerchor sponsors and performs at the local celebration of this event as did the men of the village in 1925.  Volksfest takes place at the Village Shooting Park, where the original structures pictured here still stand.  Among the little-appreciated inventions of modern times is the decidedly cooler short-sleeved shirt. 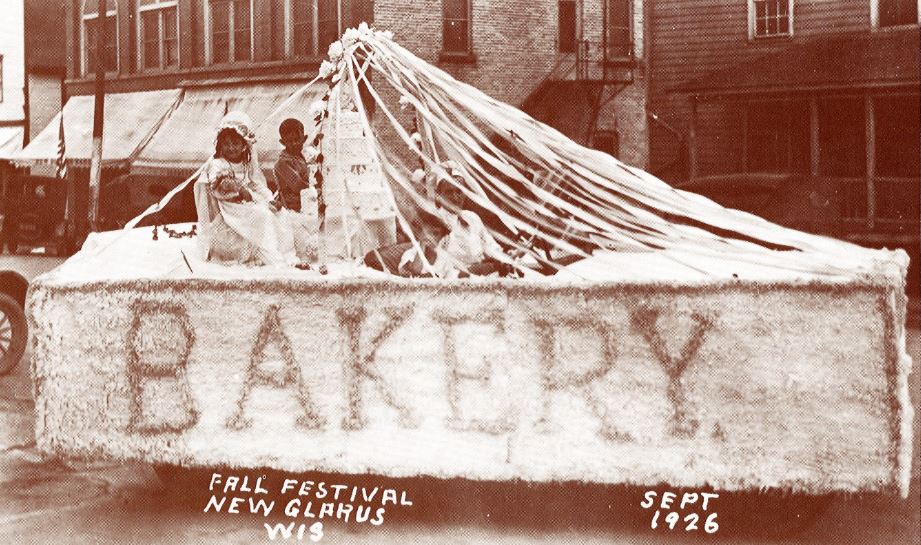 This slice of cheesecake with bride and groom is just turning the corner at Sixth Avenue and First Street.  The picture includes the building then and now occupied by the bakery, as noted on the awning at the left rear behind the American flag. 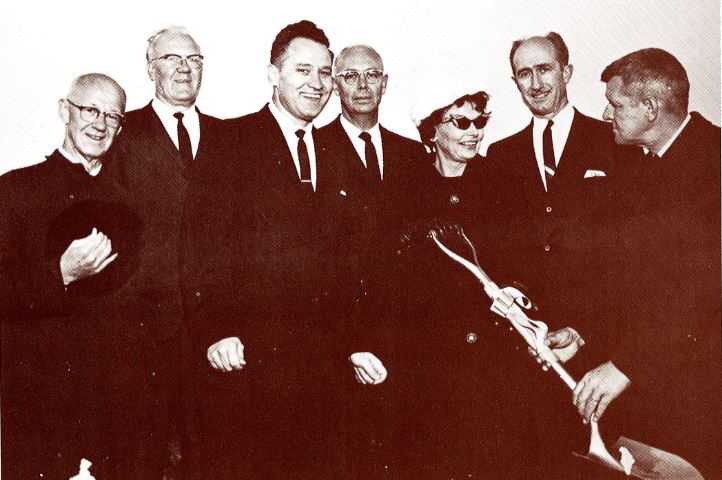 The groundbreaking for the New Glarus Home took place on October 4, 1964.  The four gentlemen in the back, all associated with the United Church of Christ, are (left to right): Norman Schowalter of West Bend, Rev. Arnold Schultz of Milwaukee, Dr. Clarence McCall, and Rev. William Schultz of Madison.  In the foreground is Rev. Linus Wierwill, then pastor of the Swiss Church.  Holding the shovel is Waldo Freitag, then Mayor of New Glarus and later President of the Bank of New Glarus.  And saving the star till last:  Ann "California Shades" Disch. 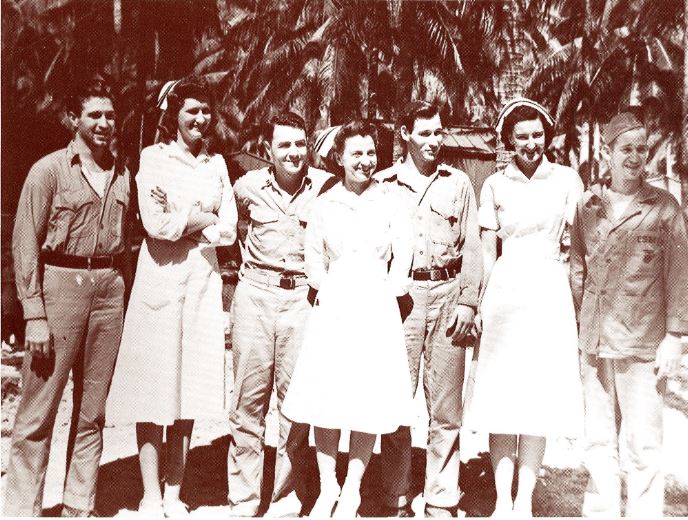 The "Wisconsin Club of the South Pacific" in WWII was how this picture was described in this official U.S. Marine Corps photo, which ran in the Milwaukee Sentinel in December 1945.  Third from left is then Navy Lt. Palmer B. Kundert, son of Rudolph Kundert.  Now retired, Dr. Kundert is also the grandson of Fridolin Kundert, one of the five founding partners of the Bank, founded in 1893.  The photo caption notes that "Tiny 60 inch Miss Glaesser insisted on standing on a piece of coral." 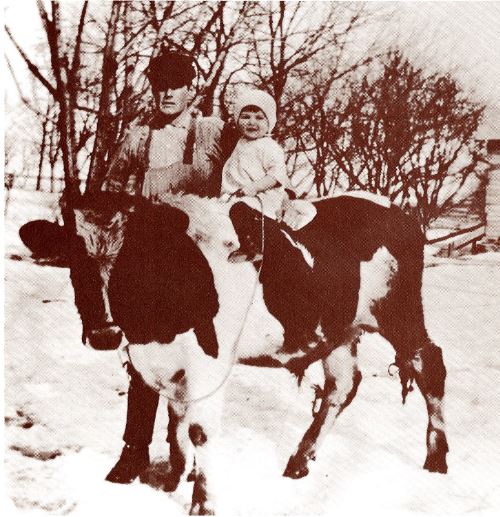 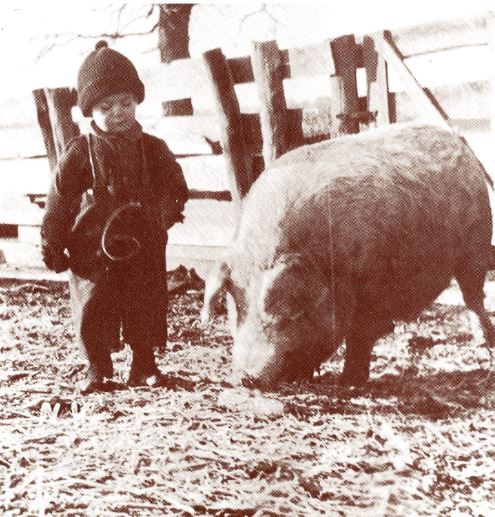 In the photo at left, one-year-old Herb Kubly is shown riding a bull with his father, Nic, in charge of security.  This was one of several efforts by Nic to interest his son in farming.  In the photo on the right, little Herb gives some additional thought to a career choice.  Herb went on to become a prominent fiction and non-fiction author and National Book Club award winner.  His closest association with the food industry turned out to be his popular "Dining Out" column, a series of restaurant reviews published by the Milwaukee Journal.