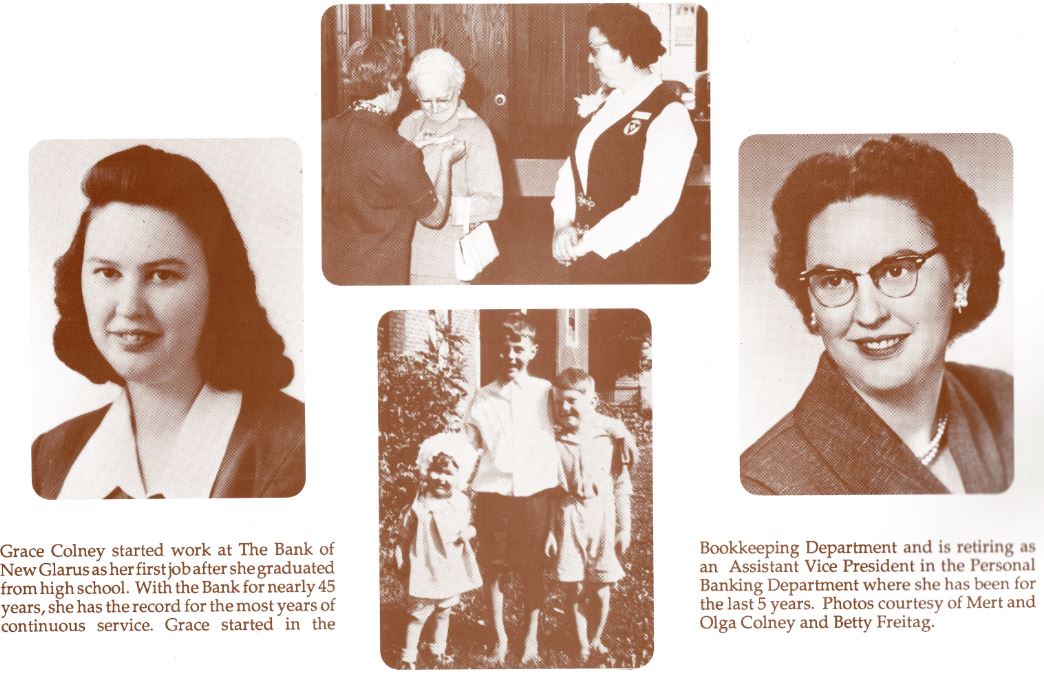 Grace Colney started work at The Bank of New Glarus as her first job after she graduated from high school.  With the Bank for nearly 45 years, she has the record for most years of continuous service.  Grace started in the bookkeeping department and is retiring as an Assistant Vice President in the personal banking department, where she has been for the last 5  years.

In 1956 Herb Kubly won the National Book Award for American in Italy, his first book.  Then-Senator John F. Kennedy addressed the literary and publishing crowd gathered for the event on February 7th at the Commodore Hotel in New York.  Following the ceremony Senator Kennedy met with the writers (left to right): W.H. Auden for poetry, John O'Hara for fiction, and Herb for non-fiction.  Senator Kennedy and Herb had met four years earlier when both worked together at the Adlai Stevenson headquarters during the Democratic National Convention in Chicago in 1952. 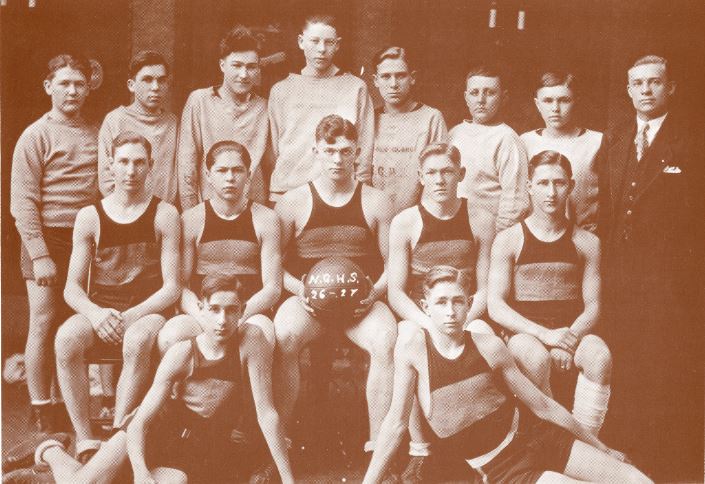 This is the 1926-27 basketball team.  Starting in the upper left corner are players Milton Babler, Clarence Marty, Elmer Hoesly, Ambrose Landmark, Jacob Streiff, Walter Kammer, Reginald Duerst, and Coach Herman Becker.  In the middle row starting on the left are Orville Jorenby, Robert Bartlet, Earl Zweifel, Edwin Alexander, and Harvey Ott.  "Babe" Luchsinger and Phillip Andrews are in the foreground.  The next year New Glarus won the Stateline League Championship, the first year of the league's formation.  In those days there was a jumpball after each score so a player as tall as Earl Zweifel could dominate the game by controlling that jump. 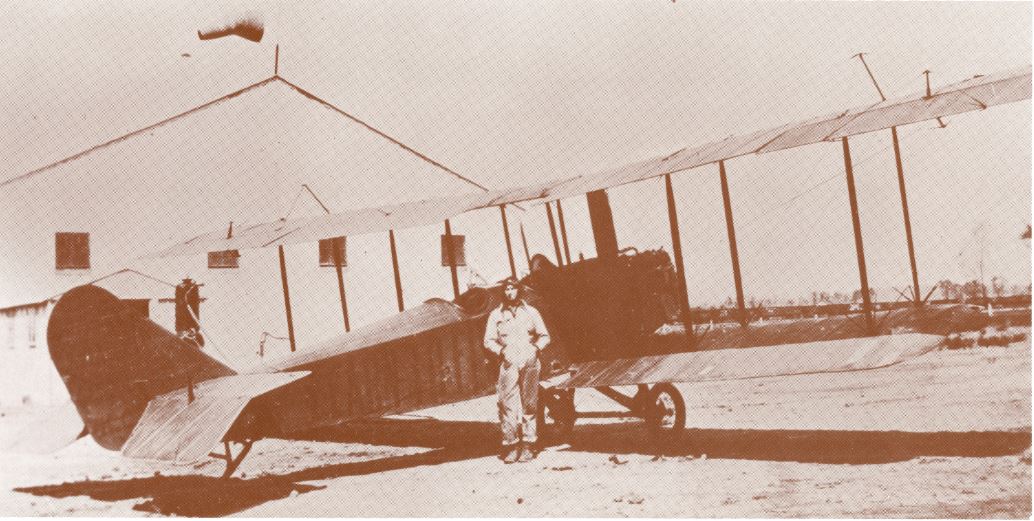 This photo was taken of Herman Lufi in Kansas City just after World War I.  There was no autopilot in those days.  He was mechanic, ground crew, navigator, and pilot.  In New Glarus, coming home late, Herman would buzz the town, asking people with flashlights and cars to light up his runway on Airport Road. 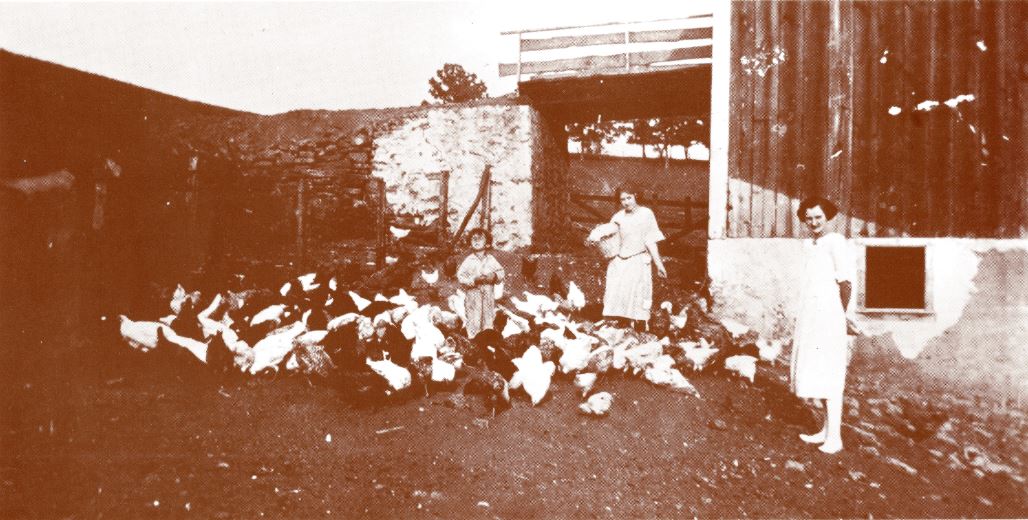 "A Bunch of Chickens"  The photo was taken at the Jacob Disch farm and features Jerry Disch, Edna Streiff, and Bertha Disch.  The farm was located on Argue Road. 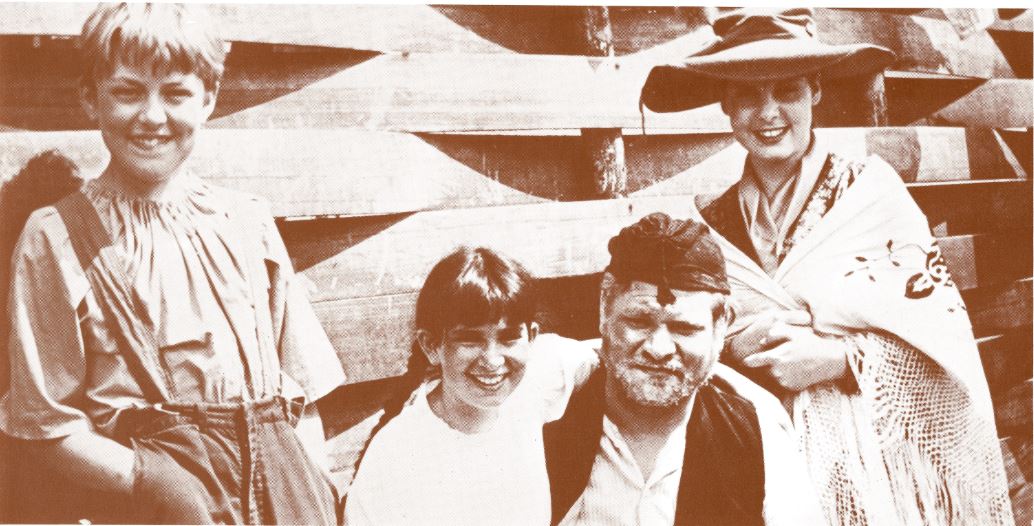 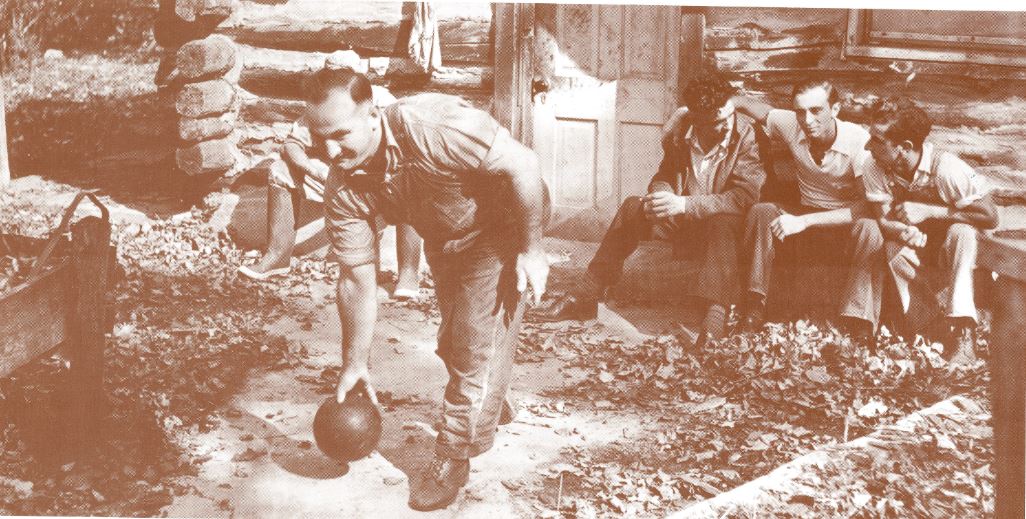 (Photo courtesy of the Historical Society of Wisconsin)

A rare picture of outdoor bowling.  This "alley" was located at the Gottlieb Gmur farm in New Glarus township.  As this photo and the next show, it was fine recreation after the week's work was done.  In this photo taken in 1934 are John Gmur, with the bowling ball, and left to right seated on the bench are Hugo Gmur (no related of John and Herb), Ken Stuessy, and Herb Gmur.  John and Germ were sons of Gottlieb. 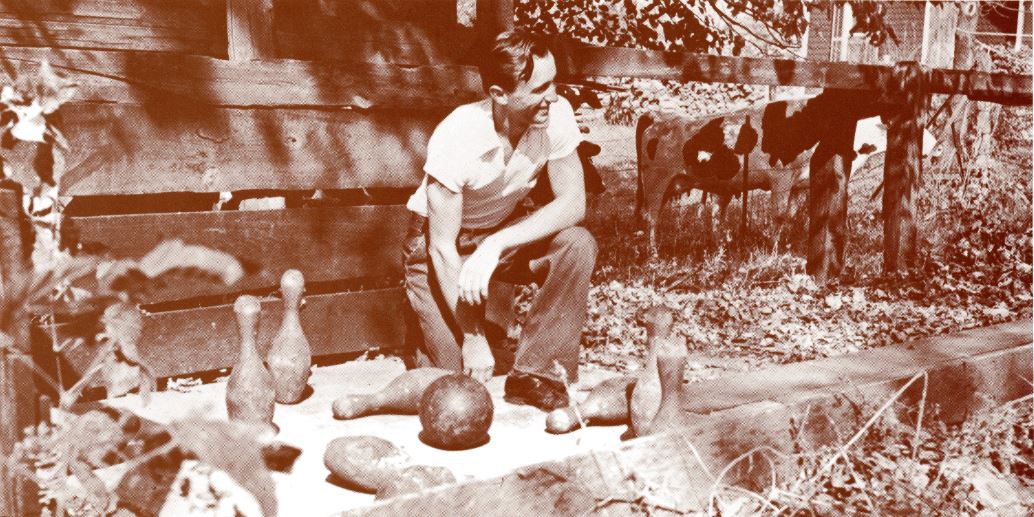 (Photo courtesy of the Historical Society of Wisconsin)

Ken Stuessy is setting up the pins after a nasty split.  The bowling alley was a single board with was splashed with water prior to use.  Herb Gmur tells us it was standard 10 pin bowling, with a nearly standard length.  This picture appeared on the front page of the Milwaukee Journal, probably in 1934.

Paul Grossenbacher immigrated to New Glarus in 1929 and married Verena in 1931.  The Grossenbacher home, just across the Sugar River on Kubly Road, was both home and dairy for many years.  He played Gessler in the first Wilhelm Tell drama in 1938 and continued in that role until 1962.  This picture was taken in 1958 with Christian Gaffner playing Rudenz. 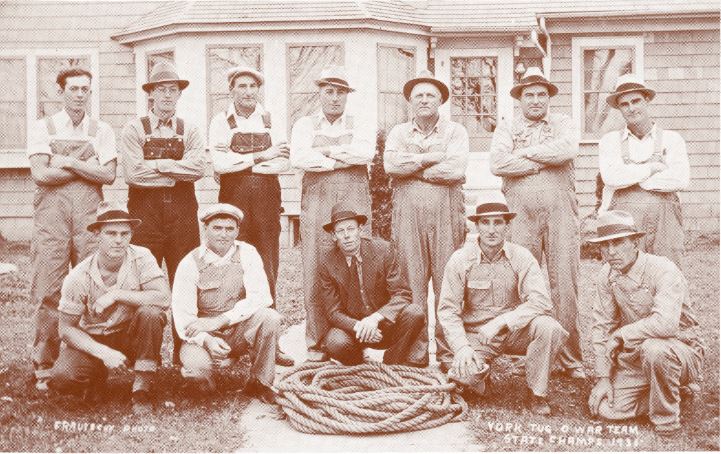 York Township's State Champion Tuggers.  These twelve men won the State Championship in 1935 by "out pulling" the Sun Prairie team at New Glarus for the championship title.  The pull lasted 1 minute and 40 seconds, a long time for that kind of effort.  Members of the team are, from left to right, starting in the back row: Carl Herrli, Lester Bleiler, Werner Haldiman, John W. Elmer, Stanley Hamilton, Peter Disch, and Robert Strahm.  In the front row: Rudi Heske, Peter Klassy, Town Chairman Elmer Vamstad, Otto Elmer, and Oscar Paulson.  This team averaged over 200 pounds per man. 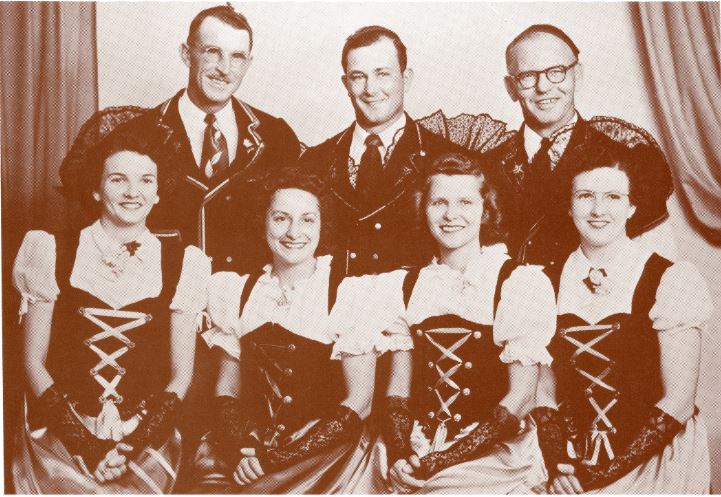 (Photo courtesy of the "Edelweiss & Betty")

This Edelweiss Stars photo is from 1950, the year the group was founded through the Order of the Eastern Star.  The original "cast" consisted of two sets of sisters: Margaret Widmer Wild and Dorothea Widmer Ingwell pictured in the center, and Kathleen Zentner (Ingwell) Elmer, left, and Marion Zentner Streiff, on the right.  Ernst "Red" Zentner, now deceased, the uncle of Marion and Kathleen, is pictured on the left; Clayton Streiff, Marion's husband, in the center; and Paul Grossenbacher on the right. 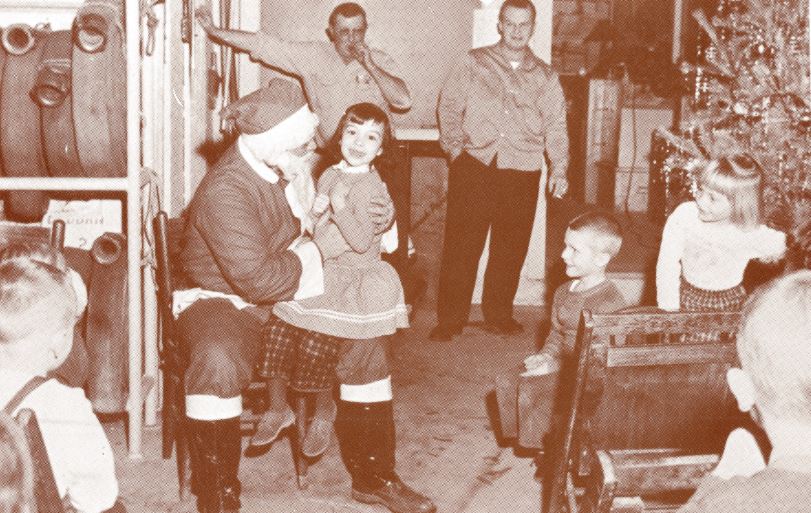 In about 1960 the Fire Department sponsored Santa's annual trip to New Glarus.  From left to right are: Margaret Schindler, on Santa's knee; against the wall, Louis Ubert and Don Ott; waiting expectantly, Gary and Gloria Boll.  Does anyone know who played Good Saint Nick?