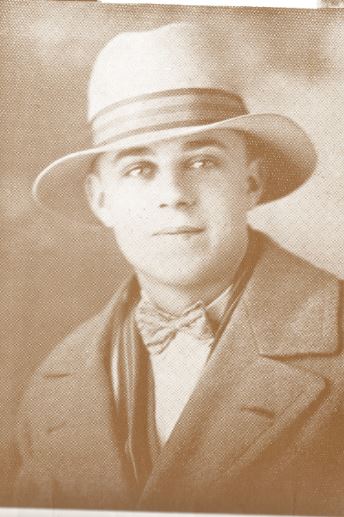 The Lufi Twins - Ernest (left) and Herman (right).  We are especially indebted to Ernie and Herman Lufi, who made their scrapbooks available to us for use in the 1989 historical calendar. 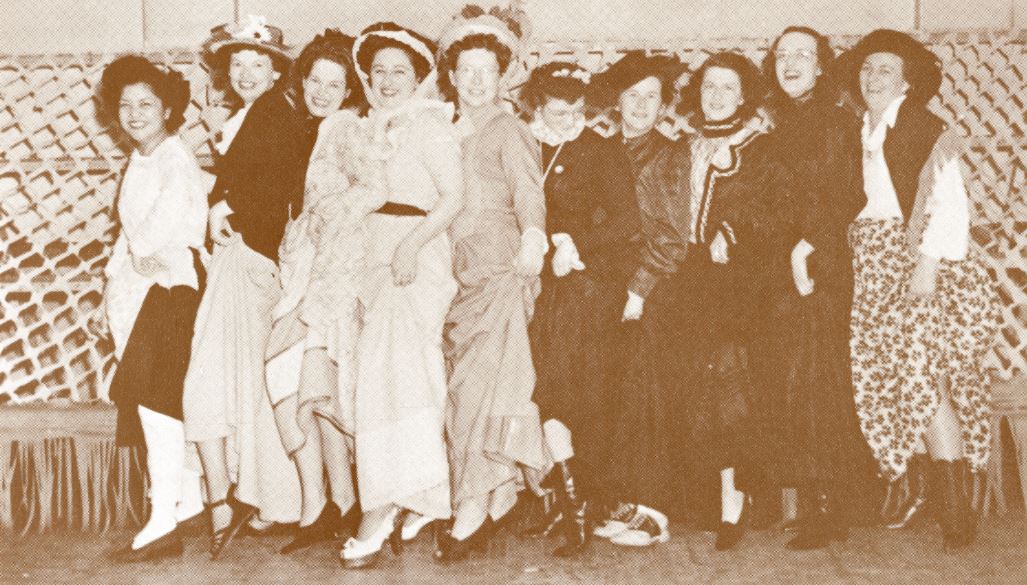 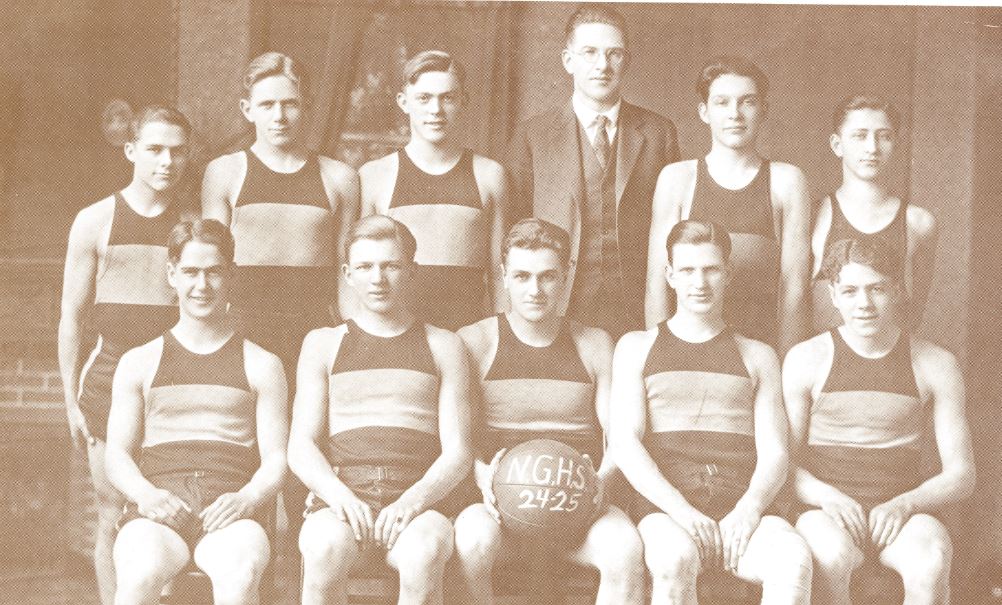 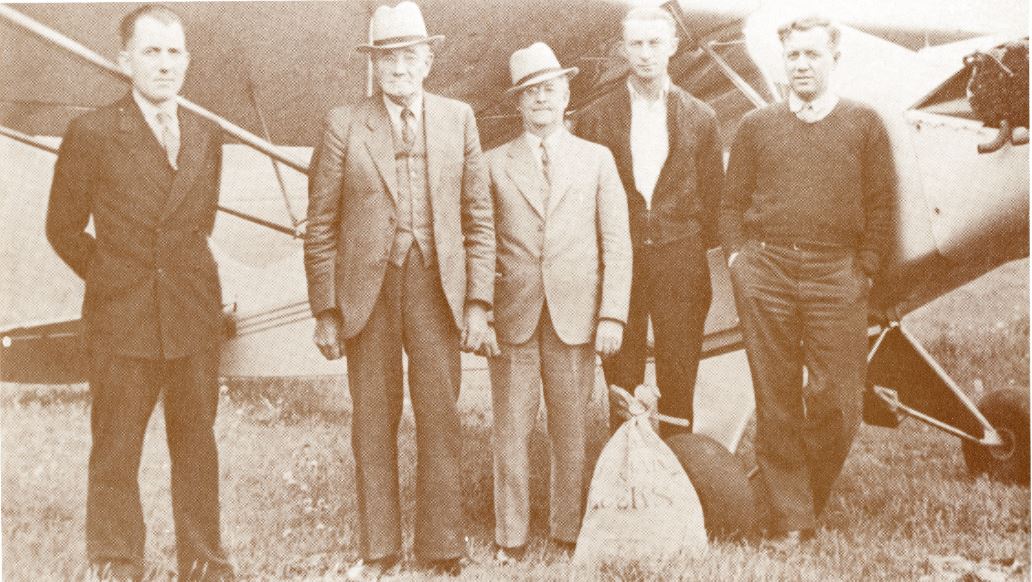 This picture commemorates what was the first and probably the only U.S. Government airmail pick-up right in New Glarus.  It was May of 1938, and was done in connection with a government publicity campaign about new air mail service.  Ernest Stauffer (left), E.S. Hilton, Postmaster Fred J. Marty stand alongside pilot Herman Lufi and rural carrier Ray Marty. 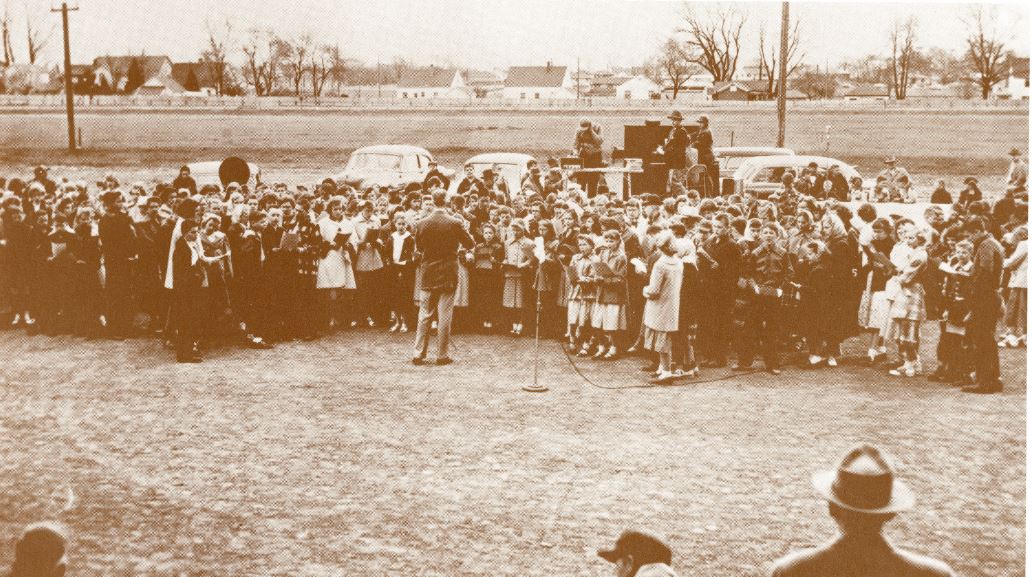 Over 3,500 people from the Green County area came together on a cold day in May of 1957 to form the Rural Chorus, which broadcast over the WEKZ airwaves in Monroe. 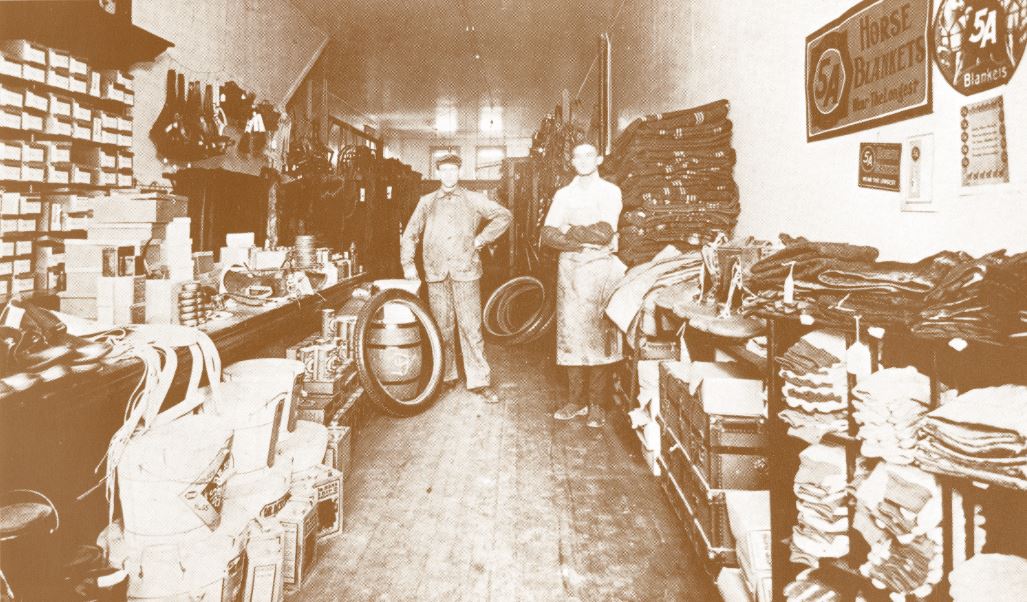 Jacob Disch and his brother Paul posed among the many items sold in the old Disch Hardware store - horse accessories, boots, shoes, and gloves - a true variety store. 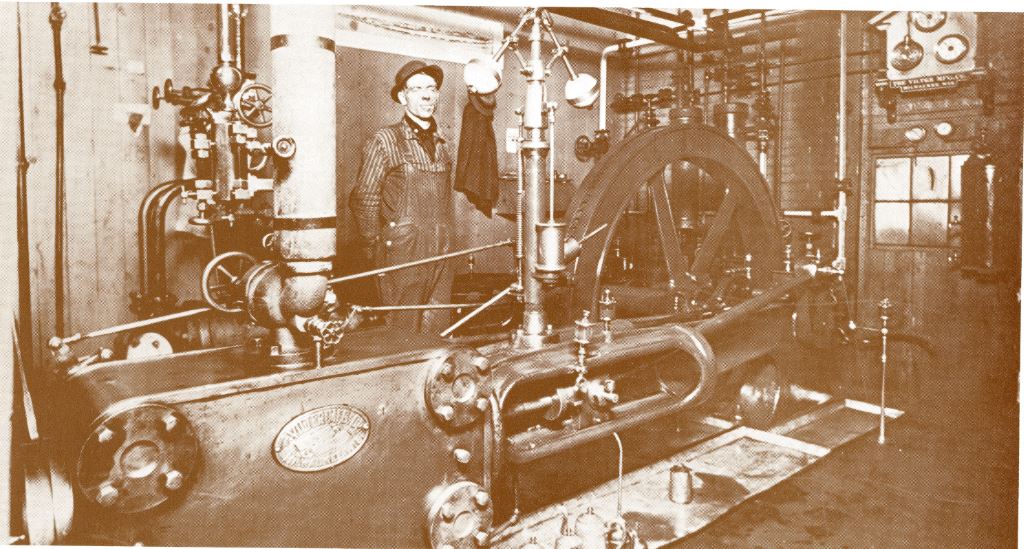 New Glarus has had its own water and light plant since 1902.  The power for both plants came from a 30-horsepower double cylinder gas engine arranged to operate one or both plants at the same time.  The water was raised from the 187-foot well by a 200 gallon deep-well triplex pump.  The dynamo for the lighting plant was a 30-kilowatt machine operating both arc and incandescent lights on a 22-volt direct current system.  The plant was designed by W.G. Kirchoffer, consulting Engineer, Madison, for around $6,000, including $340 for the well and $770 for the 50,000 gallon masonry reservoir.  In 1913, the original water plant serviced 120 customers for an average pumpage of 46,250 gallons a day.  The electric plant had 150 customers. 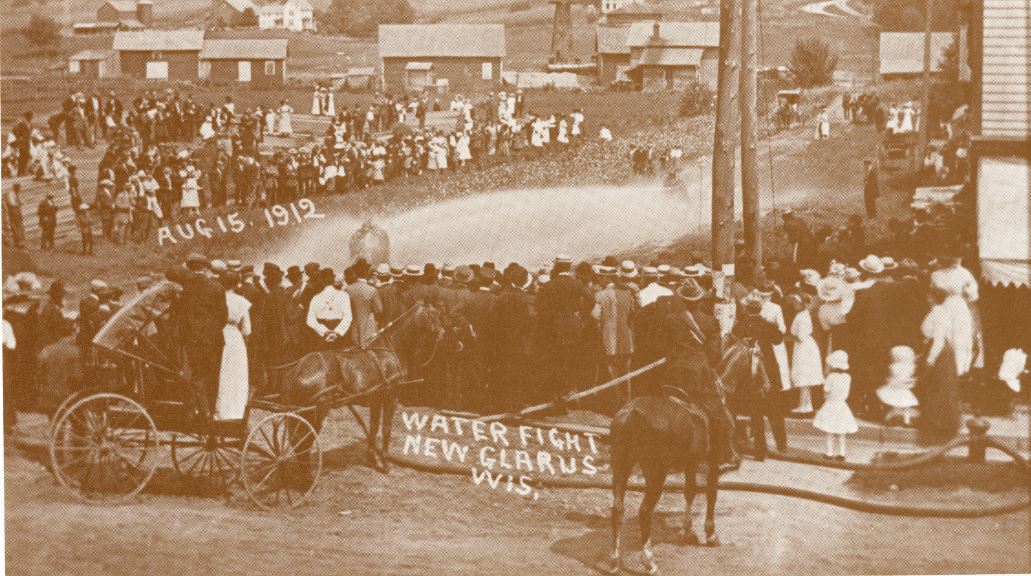 It seems everyone turned out for the big event - water fights in the summer of 1912.  The camera faces east.  If you look closely, you will see a steam enginen taking on water. 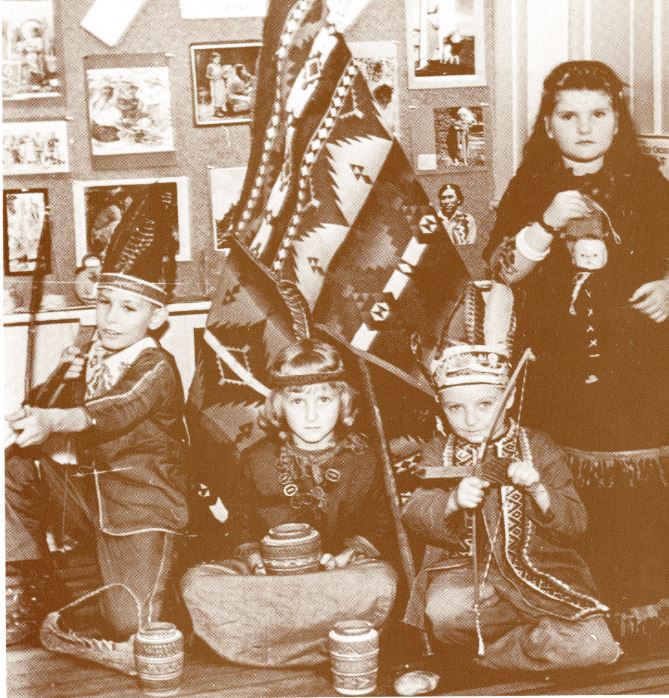 The Paoli Indian Project made the Madison papers as pupils at the Paoli school (where Ernie Lufi served as principal and first & second grade teacher) pursued a thorough examination of Indian customs, habitats, and costumes.  The students in Mrs. Thelma Peters' classroom who were pictured in the newspaper photo were (left to right): Richard Baumgartner (age 10), Joan Bavery (age 8), Jerry Zimmerman (age 9), and Rose Arlene Eichelkraut (age 8). 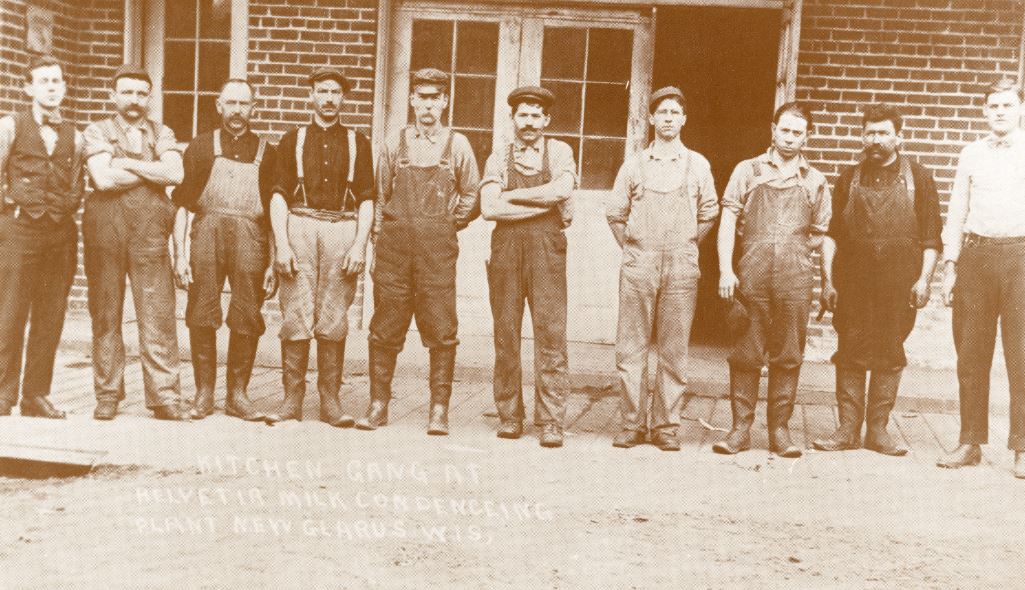 The Pet Milk Kitchen Crew - the men who condensed the milk at the old Pet Milk plant are mostly lost to history, but we think the fellow at the far right was Carl Mueller who came to Pet from their Greenville, IL plant around 1916.  The man next to him is Ernest Mueller.  The fellow second to the left has been identified as Casper Fiez. 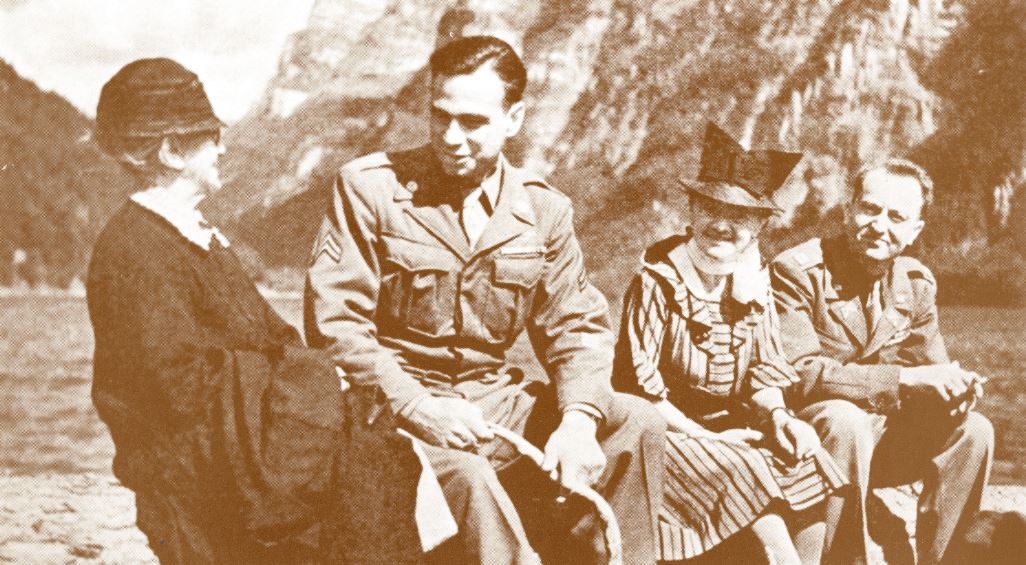 (Our Leave in Switzerland, published 1945)

A GI finds his Swiss grandmother.  Two young men from New Glarus, Wisconsin joined the same regiment of the US Army, fought in Europe, and one day came to Switzerland as furloughers.  They had the same plan; they wanted to see the Canton of Glarus from where their parents had migrated to the States.  At the door of a retirement home, Gilbert Aebli (center) found his grandmother and his aunt.  Ray Kundert (right), with his back to Kloentalersee, Glarus, Switzerland, enjoys the reunion.  It was a grand day for the whole village.