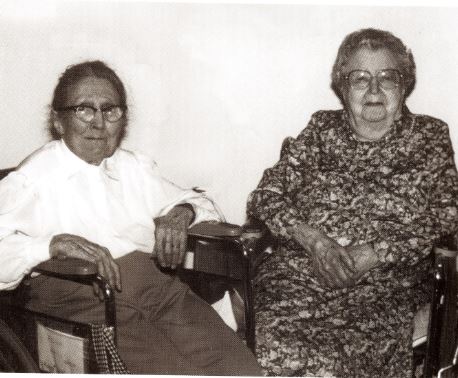 Flossie Hefty (left) and Amelia Hoesly (right) were born in 1899, and were longtime friends.  Flossie was one of 10 students who graduated from New Glarus High School in 1919.  She worked as a bookkeeper for Levitan-Stuessy dry good store for many years in the building which is now the Anderson Mall.  She and her husband, Henry Hefty, owned Hefty Brothers Mill.

Amelia was born in South Dakota.  She attended school there through teachers' college and taught one year before her dad, Melchoir Schiesser, moved his family here in 1918 because he wanted to live near "The Swiss."  Amelia married Clarence J. Hoesly in 1921.  She had two children, Robert Hoesly and Lorene Hoesly Benzel.  Amelia has six grandchildren and 14 great-grandchildren. 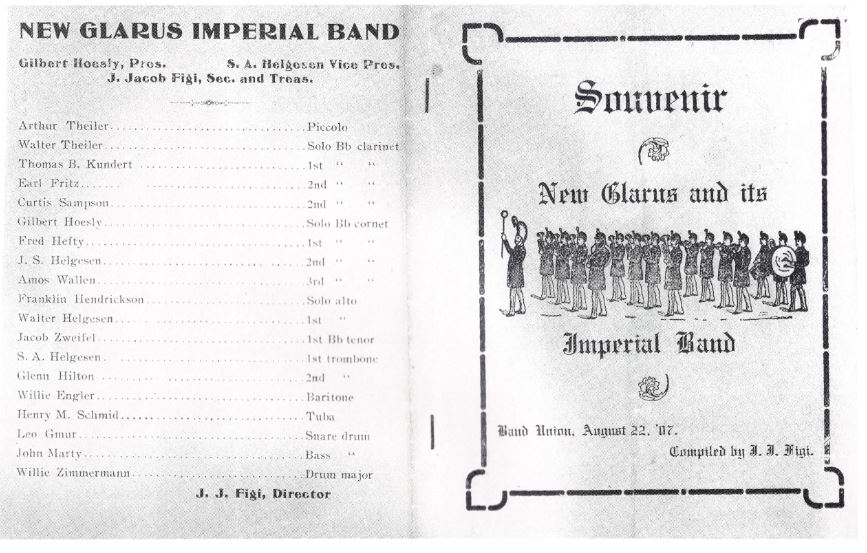 This is a souvenir booklet, New Glarus and Its Imperial Band, a band reunion held August 22, 1907.  Here is an excerpt from the booklet:  "It was on a Monday evening, July 14, 1902, when a crowd of 18 musical enthusiasts, ranging in age from 7 to 13, met at the town hall, instruments in hand, and their faces full of music, for the purpose of organizing a boys' band and partcicipating in their first rehearsal.  That fine music was not played that evening can be imagined, but out of chaos there came cosmos.  On Kilbi Sunday the band furnished music at the shooting park where they received their first financial aid, $17.22, which was collected by Melchior Schmid and used to purchase music.  In November 1902, the boys received their first band caps and in May 1903, their first band coats.  The rest of the uniforms were purchased July 1903." 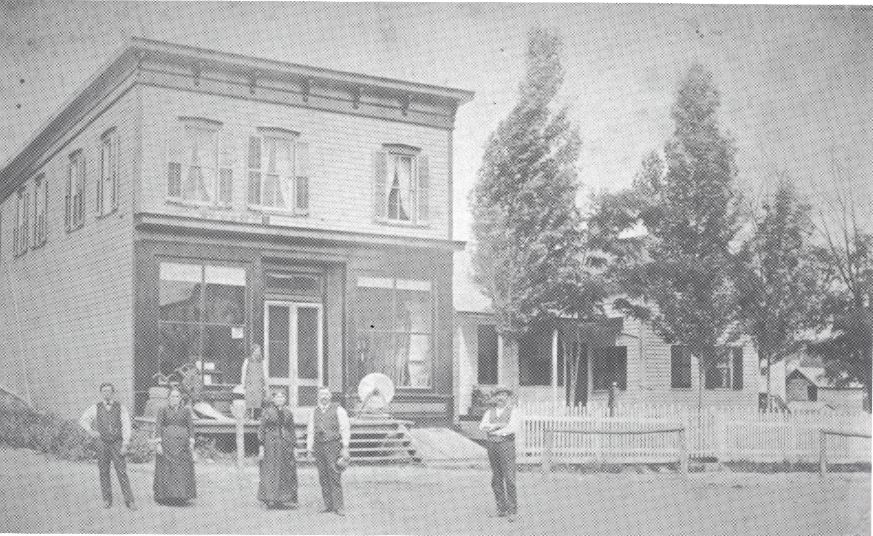 This 1880 photo shows the Hoesly Hardware building and the Henry Duerst home on First Street where the Bank of New Glarus is now located.  Hoesly Hardware sold cast iron kettles (used to cook slop for feeding hogs), plows and grinding wheels.  See the display on the porch.  They also sold stoves, guns, kerosene lanterns, cheese factory supplies, windmills, and home electric light plants.  And, when telephones were installed they had phone number 2.  The last owner was Henry Hoesly Jr., brother of Elnora Ehinger.  The couples pictured left to right are: Jost Hoesly Jr. and wife Barbara, the parents of Joe H. Hoesly.  Joe's brother, Rudy Hoesly, and his wife, Alpha, parents of Clara Engler and Sylvia Breylinger.  The other two men are unknown. 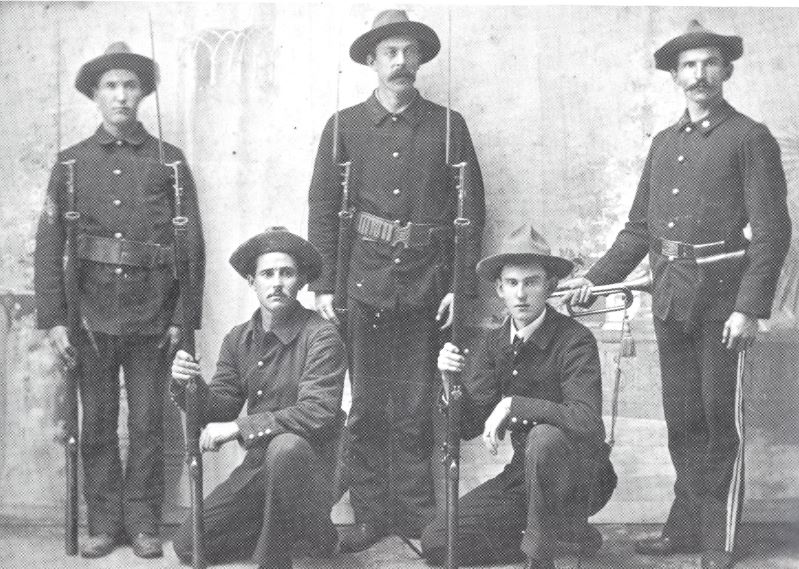 Many Glarners fought valiantly in the Civil War of 1861-1865 for their newly adopted homeland.  Approximately 86 men enlisted from New Glarus and were happy to send the money the government paid them back home to their families.  They only man identified in this photo is Fred Zimmerman.  Fred was the great-grandfather of Darrel Hustad.  Darrel's dad, Oliver, said after the soldiers returned home the government gave each man 40 acres of land. 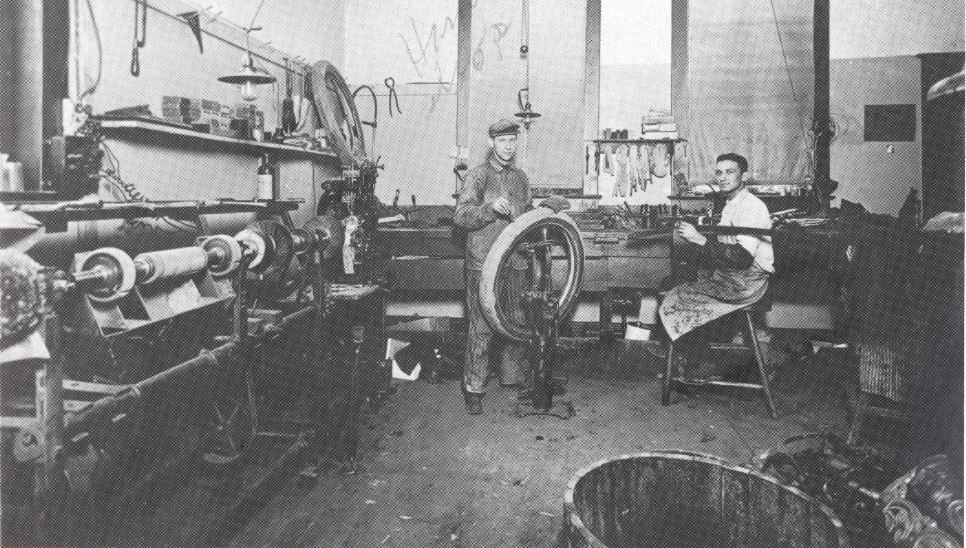 In his young adult years, Jacob S. Disch (left) with the help of his brother Paul (right), operated three harness shops.  One was on the site where the Glarner Stube now stands and one in Monticello.  This shop was located on what is now second street (across the street from the park, and kitty-corner to the Village Hall) and later became the new Gamble's store which Jacob and son, Gerry, started.  This picture taken about 1915 shows the two men getting leather ready for making harnesses.  As a kid, Gerry Disch remembers his job was to clean the manure off harnesses that were brought in for repairs.  Jacob and Bertha's children were Gerry, Rolland, Lucille Disch Hartman and a son, Dennis, who died at the age of 2 from blood poisoning.  Paul remained a bachelor. 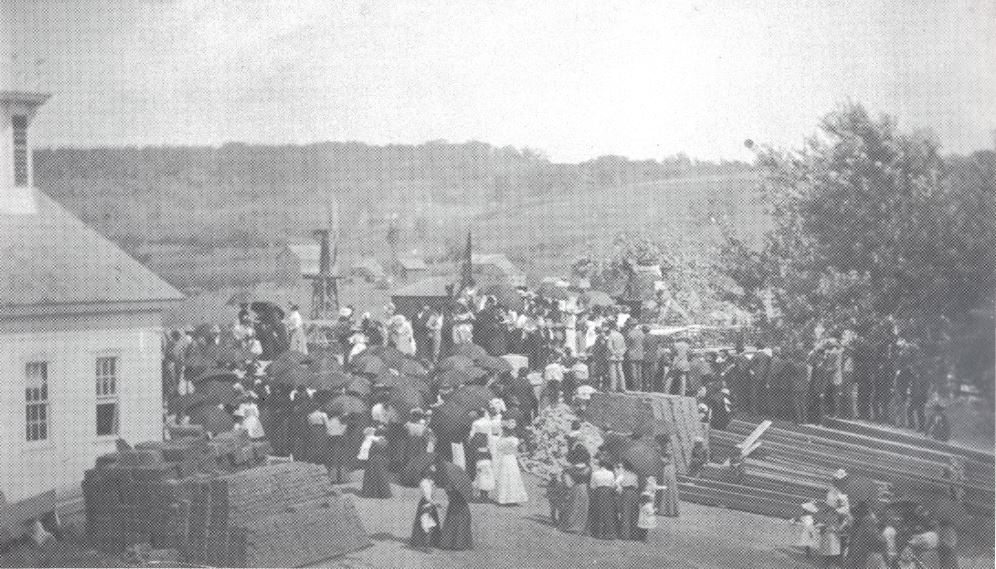 THe cornerstone of the Swiss United Church of Christ was laid September 2, 1900 and this is likely a picture of the event.  Notice the stacks of brick and wooden beams and the people standing on top to get a better view.  Look for the two windmills and the railroad depot in the background and the Sunday School building on the left.  The old stone church was torn down after the last service was held on April 29, 1900 to make way for the magnificent new structure which was dedicated March 24, 1901. 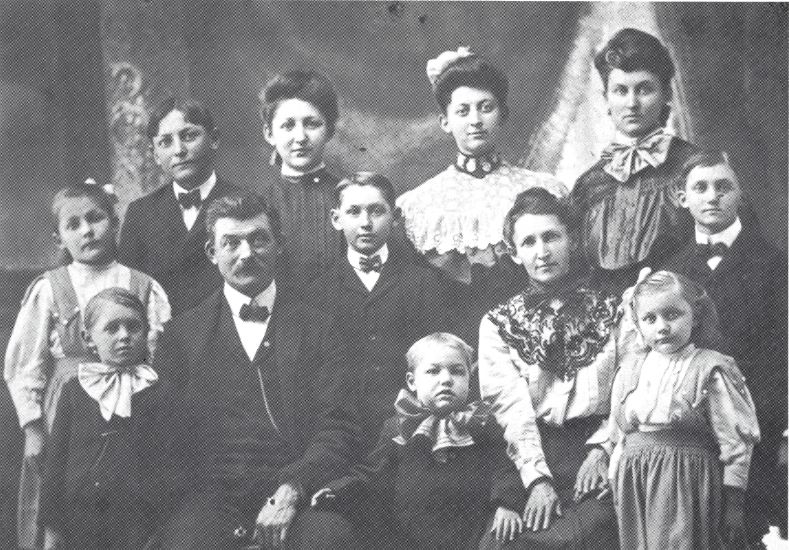 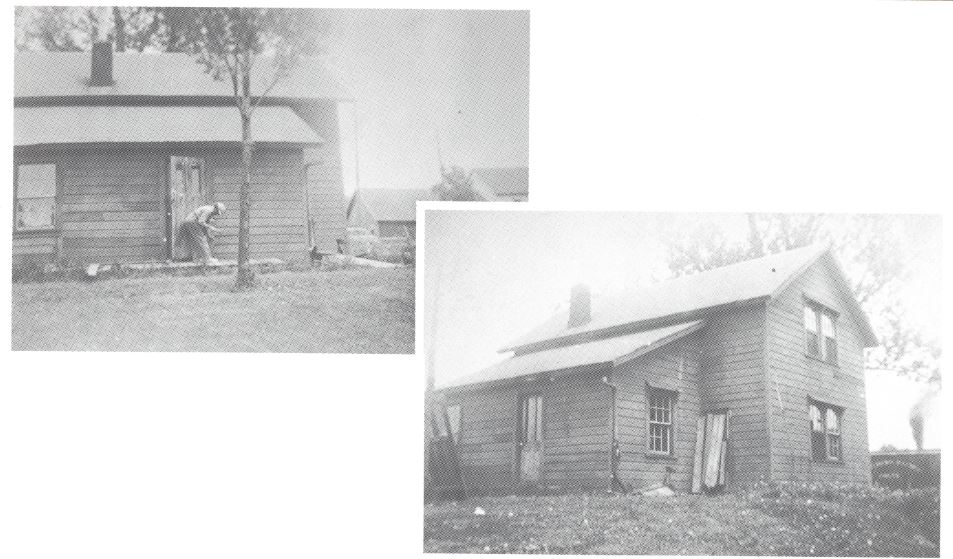 The railroad owned this house called "the section house" and the "section man" Joachim Klassy and his family lived in it.  Klassy was responsible for keeping the railroad tracks in good order and did his inspections by pumping a hand operated "section car."  This house which was probably built in the 1890s stood on the southeast corner of Railroad Street where the Village Park is now.  In 1944 (the year these pictures were taken), Elda Schiesser's dad, Adolph Strahm, bought the house for $200. 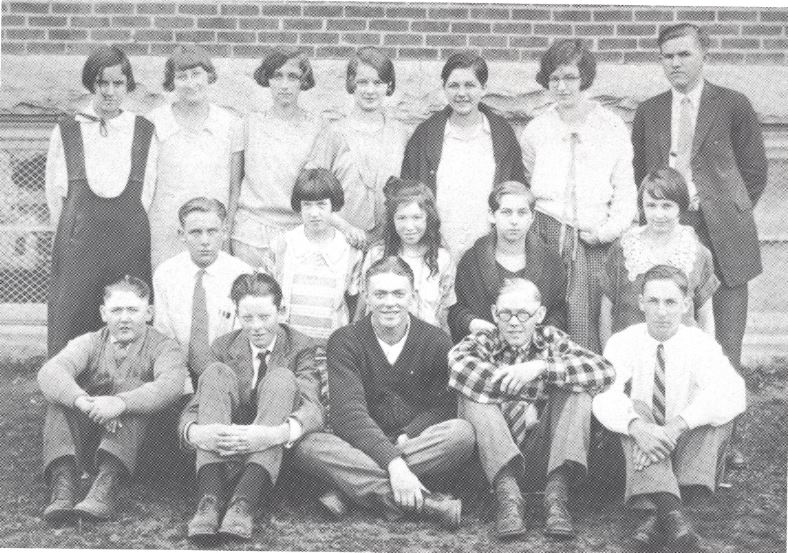 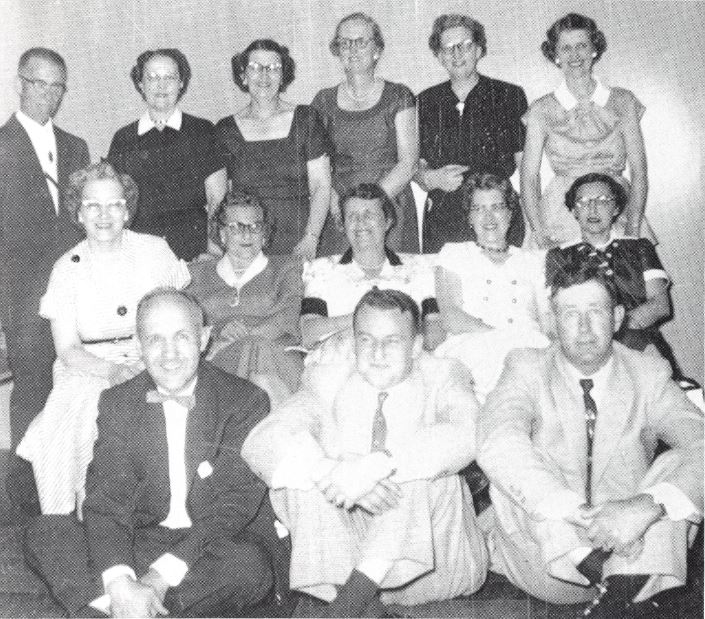 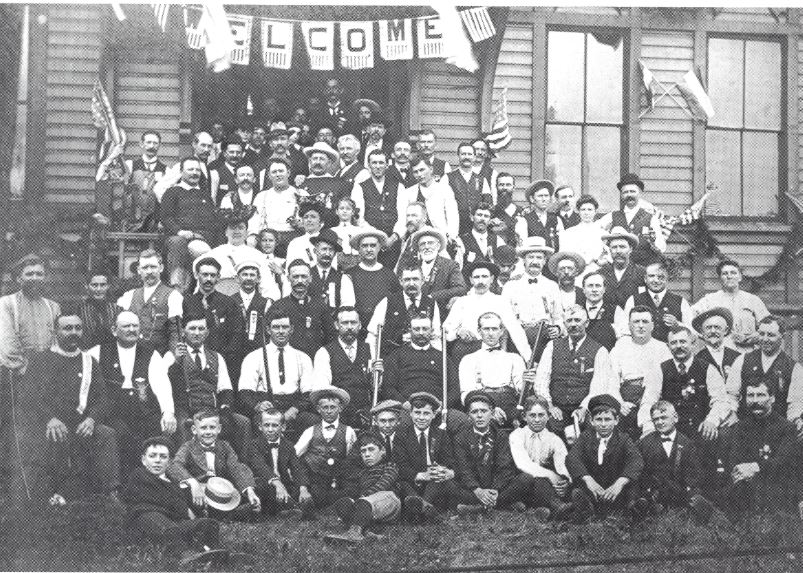 New Glarus Schuetzenfest goes back to the early years of the community's existence.  Day-long shooting festivals were held at the Shooting Park on Second Street north of the Village.  We don't know much about this picture but it's likely the opposing team and family members from Milwaukee and was taken in front of the railroad depot.  The note on the bottom of the picture is inscribed "WIS SHARPSHOOTERS UNTION MIL JULY 28, 1904." The gentleman on the left, second row, is wearing a banner that says Shootingmaster. 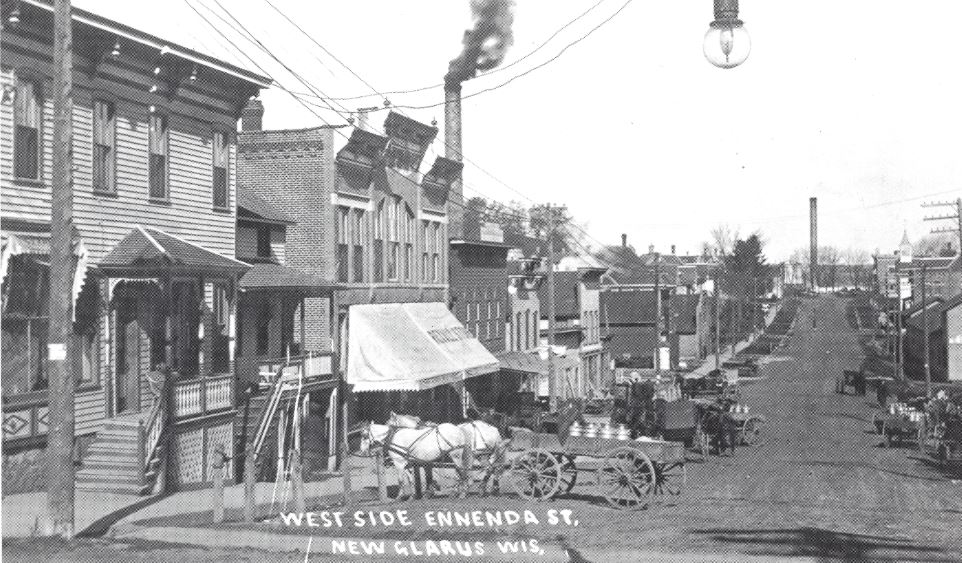 The name Ennenda is the town directly across the river from Glarus, Switzerland.  This picture of Ennenda Street (later renamed Second Street) in New Glarus was taken about 1911.  In  1911 the sidewalks and electricity were installed but the luxury of paved roads was a year or two away.  Farmers must be shopping or getting a cup of brew after delivering their milk to the new Helvetica Milk Company.